The Business of Civil War 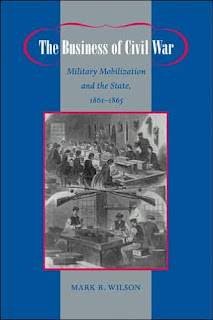 When one is interested in a relatively un-studied aspect of the Civil War as I am - that is, the intersection of military history and business history - you treat the appearance of a book on the subject with great interest. So it was for me when I noticed an entry for Mark Wilson's The Business of Civil War: Military Mobilization and the State, 1861-1865 (Baltimore: John Hopkins University Press, 2006) in a list of "Just Received" books in The Civil War News.

I ordered the book with haste and was not disappointed when I received it and read it. Wilson's work has justly received estimable reviews from The Civil War News, Journal of Military History, Civil War Book Review, and North & South.
I heartily agree. For my part, there were several aspects of the books that I found most helpful:
First, his excellent discussion of labor issues - especially among women employed in the government-run clothing halls - and how they influenced the Quartermaster Department in making difficult decisions with very high stakes: that is, what Wilson calls the "make or buy" decision - should the QM use private industry, the government facilities, or both.
Second, his exposition on the difficulties contractors had in actually getting paid - though many contarctors earned millions "on paper" through lucrative contracts, the government didn't always have ready cash to pay them and some had to accept government certificates of credit which they then traded - at a discount - for cash.
Third, his "Essay on Sources" is worth the price of the book itself. Wilson lays out his use of a mix of government records, corporate archives, court proceedings, and the best secondary sources. The bibliographic essay has proven invaluable in the research for my own forthcoming book, Lincoln's Labels: America's Best-Known Brands and the Civil War (Edinborough Press, Roseville, MN, Spring 2008).
Wilson has published other interesting work on the role of businesses in the Civil War, including
“Gentlemanly Price-Fixing and Its Limits: Collusion and Competition in the U.S. Explosives Industry during the Civil War Era,” Business History Review 77 (Summer 2003), 207-234 and “The Extensive Side of Nineteenth-Century Military Economy: The Tent Industry in the Northern United States during the Civil War,” Enterprise & Society 2 (June 2001), 297-337. He is now turning his attention to mobilization during WWII.
In the interest of "full disclosure," in the time since I first read Business of Civil War, Mark has been extremely helpful in regards to my own research and writing and has offered invaluable advice that will only make my work, Lincoln's Labels, better.
I, for one, look forward to more from Mark Wilson!
Best Regards,
Jim Schmidt
Posted by Jim Schmidt at 3:50 PM