A Bark By Any Other Name... 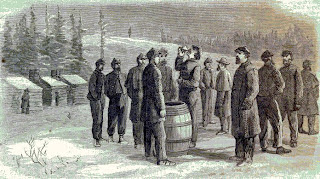 Harper's Weekly - March 11, 1865
"BEFORE PETERSBURG—ISSUING RATIONS OF WHISKY AND QUININE"

Those of you interested in Civil War medicine - as I am - will be happy to learn of a recent article by my good friend, Guy Hasegawa, Pharm. D., "Quinine substitutes in the Confederate Army" in the current issue of Military Medicine (June 2007, Vol. 172, No. 6, pp. 650-5).

If you regularly read this blog or my "Medical Department" column in The Civil War News, you will remember that Guy (ghasegaw@ashp.org) is an expert on Civil War medicine, having published previously on pharmacy in the war, medical cadets, the Confederate medical laboratories, and other interesting topics. His writing - besides being interesting and new - is always marked by relentless research, especially on primary material in archives.

As seen in the abstract (below) for his most current article, Guy's research centered on the substitutes for quinine (derived from the bark of the South American cinchona tree and used to combat malaria) that were suggested and/or used (with unequal success) as the Confederacy faced a shortage of quinine itself during the Civil War:

"During the Civil War, the unreliable supply and high cost of quinine forced the Confederate Army to use alternative treatments for malaria. Many quinine substitutes were mentioned in the literature of the time, but relatively few were advocated by Confederate officials and even fewer are described in surviving records. Medical supply officers often issued substitute remedies when quinine was requisitioned. Most alternative treatments were made from indigenous plants such as dogwood, willow (a constituent of which gave rise to aspirin), and tulip tree. High hopes were held for Georgia bark, which was thought to be closely related to cinchona, from which quinine was derived. Documentation of the effectiveness of quinine substitutes is scanty but is most plentiful for the external application of turpentine. The quinine substitutes were generally considered useful but not as effective as quinine. The Confederate Surgeon General's Office was active in seeking out and supplying troops with quinine substitutes. "

Guy has been kind enough to answer some questions to dig deeper into the article, including:

A) What prompted him to pursue this line of research?

B) What is the difference between "intermittent,""periodic," and "malarial" fevers? Were the terms used interchangeably as far as diagnosis and/or treatment? Could he also comment on the differences between preventing/curing malaria and treating its symptoms? (For example, I was intrigued by a line in his article: "Soldiers w/ malaria were to report ~45 mins before thir chills were expected…"…were the onset of symptoms really that predictable?)

C) How does his research build on what has been written on this subject before? Previous works seem to "celebrate" Porcher's compilation, but don't seem to look closer at whether any of his recommendations were actually used.

E) I asked Guy to contrast the quinine situation in the Confederacy w/ that in the North…were there ever shortages? Substitutions due to shortages or price increases? What was the base of quinine supply in the North…imports? Was the supply of South American cinchona ever threatended or interrupted?

F) What was his most interesting research find? What was the most challenging aspect of delving into the Record Groups at NARA? In our first interview a few years back, Guy commented on learning how to use NARA…does he have any more tips to pass along?

Look for my interview with Guy in the August or September issue of The Civil War News. I'll post the column here on the blog shortly after it appears in print.