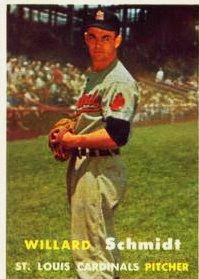 One of the really interesting fruits on my family tree is Willard Schmidt. He is my great-uncle (my paternal grandfather's brother). I wasn't especially close to him and only met him a few times in person, but he has always been a source of pride for me as he was a major league baseball player, pitching for the Reds and Cardinals in the 1950s. When I did meet him, he always struck me as a really nice and humble fellow. He retired from baseball, settled in Oklahoma, and became a respected member of the community. When I was home in Oklahoma City a few weeks ago, I learned that Willard had passed away in March after a long illness.
My ancestors didn't come to America until the mid-1870s (which, of course, is a mild source of irritation to a Civil War enthusiast) where they settled in Kansas in villages in Ellis County, Kansas. Their heritage - of which I am extremely proud (and interested in) - as "Volga Germans" or "Germans from Russia" is well-documented and there is an active association of researchers and genealogists as part of the American Historical Society of Germans.
They were early and eager adopters of baseball as a sport after settling here, and undoubtedly it was one of the ways they assimilated into their new homeland. My grandfather (Willard's brother) played semi-pro baseball for many years; Ron Schueler - another relative - also hailed from Ellis County and was a journeyman MLB pitcher in the 70s. My brothers were also talented players. It skipped me, though.
I have always had some of Willard's baseball cards as personal treasures and knew a few things about his career, but since learning of his passing a few weeks ago and doing some research, I've learned even more, including his NL record (since tied) for being hit-by-a-pitch the most times in a single inning and a great outing against the Cubs in which he retired 20 Cubs batters before giving up a hit...that's just 4 outs short of a perfect game (they lost 4-3 that day, though).
I look forward to learning more - and even writing more - about Willard Schmidt. Till then , you can learn more about him here:
Wikipedia
Baseball Reference
Best Regards,
Jim Schmidt

What a great character to have in your family tree -- he had a pretty decent career. Getting hit twice in the same inning (though since tied twice, as you mention) is a record that's not likely to ever get broken.

I took a look at the Baseball Almanac and see that, in that same game, he got hit by a line drive while on the mound, and had to leave the game (in the 4th). He must have been sore the next day.

Thanks for the kind reply to the message. I am learning a lot more about Willard Schmidt and hope to pen an article about him for a baseball publication in the coming months.

I am actually doing a report on him this quarter for my research paper and I've been reading your book for awhile and that helped me through the civil war unit and I thank you.

Justin - Hi! It's great to hear from you! What a wonderful subject for a research paper! I can't wait to see you guys next week for Christmas. I have some cool old newspaper articles about Willard I can share with you also.

Hi Jim, my dad coached Willard in high school in Hays, KS. We later moved to CA but my dad kept track of him & he & I even met & had lunch with him in San Francisco when he came out to play the Giants. I think I was 11 or 12 & he passed a ball around the locker room & got a lot of the players to sign it for me. A great childhood memory.