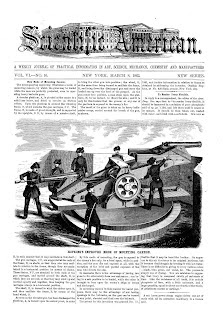 A great post isn't unusual for David Woodbury over at Battlefields and Bibliophiles...it's a given! His most recent post - about Abraham Lincoln's 1849 invention and patent - however, strikes a special place in my heart as it intersects with one of my special interests: science and technology and the Civil War.

One of the best places to learn about science, technology, and invention in the war is by looking at wartime issues of Scientific American magazine...that's right, the same magazine that is in print today!
Scientific American played an important role during the American Civil War by fostering and reporting on innovations that had an impact on the battlefields and waters while weathering wartime crises of its own.
I wrote about the important role that Scientific American magazine played in the Civil War for North & South magazine in February 2006. I have a full chapter on Scientific American in my forthcoming book, Lincoln's Labels: America's Best Known Brands and the Civil War (Edinborough Press, 2008).
Below is a brief introduction to Scientific American and its role in the Civil War...
Scientific American is America’s oldest continuously published magazine and has delivered opinion and news about developments in technology for more than 150 years. Founded as a weekly broadsheet in 1845 by Rufus Porter, the magazine has attracted the attention of inventors and scientists both famous and obscure, and now boasts more than a million readers around the globe.
Born in 1792 in Boxford, Massachusetts, Rufus Porter was by turns an apprentice shoemaker, itinerant musician and painter, schoolmaster, and prolific inventor (he sold his idea for a revolving rifle to Samuel Colt for $100). In the 1840s, Porter’s interests turned to journalism and he published his first issue of Scientific American on August 28, 1845, as a four-page weekly. For two dollars a year, Porter delivered news of inventions (usually his own), essays on moral subjects, and even some music and poetry.
Porter became bored with the enterprise and sold the paper less than a year later to Alfred Ely Beach and Orson D. Munn. Munn was managing a general store when Beach, a friend and classmate, persuaded him to join in purchasing the Scientific American from Porter for $800. The men established the firm of Munn & Co. and secured an office in New York City. By 1853, under Munn’s direction - Beach remained a silent partner until the 1870s - the onetime four-page broadsheet with only a few hundred subscribers had grown to sixteen pages, was the leading journal of its kind, and boasted a circulation of 30,000.
Munn published Scientific American as a paper chiefly devoted to inventions and published a weekly list of all patents, with associated claims, issued by the Patent Office. There was a paucity of expertise in patent law, except in the largest cities and would-be inventors flooded the magazine with requests for advice. To meet the demand, Munn launched the “Scientific American Patent Agency” in 1847. The agency became the foremost of the day, and in 1860, on the eve of the Civil War, Munn & Co. secured one-third of all patents issued by the U.S. Patent Office.
Scientific American endured its own “secession crisis” when, in the December 1, 1860 issue, the magazine featured an engraving of President-elect Abraham Lincoln’s 1849 invention of “an improved method of lifting vessels over shoals.” Thinking that it would interest their readers to see an invention that “emanated from the brain of so distinguished an official,” the editors concluded with the hope that Lincoln would exhibit “better success in presiding as Chief Magistrate over the people of the entire Union than he had as an inventor in introducing his invention upon the western waters.”

Weeks later, in a subsequent issue, the magazine reported with bemusement that a Northern subscriber accused them of “undertaking to cast a slur upon ‘Honest Old Abe,” and guessed that the irritated reader “jumped at the conclusion that we had trumped it [Lincoln’s invention] up for the purpose of casting ridicule upon his candidate.”
The matter did not end there - Southern readers threatened to cancel their subscriptions (some actually did) and accused Scientific American of rejoicing “over the election of a Black Republican rail-splitter.” One Southern wag wrote in feigned indignation that the “publication of His Excellency's invention would enable the Northerners to ride into Charleston at low water, and thus reinforce Fort Sumter.”
The general format of Scientific American remained the same for many years: an engraving and description of a notable invention graced the front page, followed by a list of newly granted patents, an editorial page, a query column, and advertising. For dozens of issues during the Civil War, the front page featured engravings and reports on innovations associated with warfare, including improvements in cannon, projectiles, rifles, and shipbuilding. For example, the paper reported enthusiastically on the potential and performance of the ironclads. A section on “Military and Naval Affairs” delivered the latest war news.
One of the truly unique features of Scientific American was a section entitled, “Notes and Queries.” The magazine received dozens of pieces of mail each day – many relating to mundane subscription matters – but most were questions from aspiring inventors who trusted the magazine to comment on the feasibility or originality of their ideas. During the Civil War, Scientific American responded to hundreds of potential advances in military technology sent by readers; sometimes brutally: “To M.F. of Ill. – Your shell filled with chloroform and cayenne pepper would be a very harmless affair,” and sometimes enthusiastically: “To H.L. of N.Y. – Spectacles which would enable persons to see at night would be very useful [and] would be of great advantage to night-scouting parties.”
Posted by Jim Schmidt at 8:49 AM