Medical Department #19 - A Canadian Surgeon Who Gave His All

I took a break from writing my regular column, "Medical Department," for The Civil War News for a few months so that I could give attention to writing/editing my forthcoming book on Civil War medicine with my co-editor, Guy Hasegawa; the book is set for publication in Fall 2009 by Edinborough Press with all royalties being donated to Civil War preservation causes.

With the lion's share of the book preparation out of the way, I'm pleased to return to the column; the most recent piece - an author interview/book review was published in the most recent (November 2008) issue of The Civil War News, and I'm happy to reprint it below. Future columns will be devoted to patent medicines, phrenology, steamer accidents, chemical weapons, and much more! 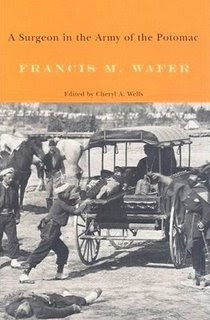 “On enquiring where the 108th NY was I learned it was in the Army of the Potomac. So I saw at a glance there was an eventful future before me, knowing so well what that army had already suffered as well as having some foreboding of what would be required of it...” – Francis M. Wafer

At the outbreak of the American Civil War, Francis M. Wafer was a student at Queen’s Medical College in Kingston, Ontario, Canada. Like many of his fellow Canadians in medical school, Wafer came to the United States during the war “to profit by the new and extensive field thrown open for the study of Practical Surgery.”

In her recent book, A Surgeon in the Army of the Potomac (McGill-Queen’s University Press, 2008), Dr. Cheryl A. Wells provides an edited and well-annotated collection of Wafer’s writings, including period letters and a riveting postwar memoir.

Wafer chronicled his journey from Canada to New York to take his qualifying examinations, his assignment with the 108th New York in the Army of the Potomac, and battles from Chancellorsville to Gettysburg to the Overland Campaign of 1864. As quoted above, Wafer began his memoir with a sense of trepidation at “an eventful future,” knowing what the Army of the Potomac had already been through; little did Wafer know what would be required in terms of his own suffering. Although his letters and memoir end before the surrender at Appomattox, Dr. Wells has most ably added the rest of Wafer’s somber story: failing health brought on by the toll of the war, his untimely death, and his family’s unsuccessful journey through the pension bureaucracy.

Dr. Wells received her B.A. in History and English (with Honors) from Wafer’s alma mater, Queen’s University (Kingston, Canada), and her M. A. and Ph.D. from the University of South Carolina. She is presently an Associate Professor in the history department at the University of Wyoming. The publication of Wafer’s memoirs marks Dr. Wells’ second book; her first was Civil War Time: Temporality & Identity in America, 1861-1865 (University of Georgia Press, 2005), adapted from her dissertation.

Dr. Wells is currently working on a wide variety of projects, from writing a book detailing how Native Americans incorporated clock time into their older temporal understandings (due from University of Georgia Press in 2010), editing a collection of writings of a Louisiana plantation overseer, and investigating the Canadian reaction to Lincoln’s assassination.

So, how did a native Canadian obtain an interest in the American Civil War? “I grew up along the Canadian-US border within eyesight of New York State,” Dr. Wells told me, adding “We were always inundated with American culture and politics.” A love of reading – including the historical fiction of John Jakes – and undergraduate classes at Queen’s inspired her interest in early American history, and “South Carolina seemed like a natural place to pursue that interest,” Dr. Wells said. With the encouragement of Dr Mark M. Smith, she finished her graduate work at USC.

It was at South Carolina, while writing here master’s thesis on Canadians in the Civil War, that Dr. Wells became aware of Wafer’s writings. Her grandmother generously arranged to have the Wafer collection copied, but they were set aside as Dr. Wells pursued other projects. In 2005, she re-visited the collection and began to “re-acquaint” herself with Wafer.

Editing the collection proved difficult as fire and stains had damaged some of the writings, making them indecipherable in parts. “I initially attempted to standardize his punctuation and grammar and the rest of his oddities,” Dr. Wells told me, adding, “Later, I changed my mind and opted to let the flavor of his writings and the integrity of the text stand, for the most part, as they were.” Where the text was so badly damaged that multiple deletions would have been distracting to the reader, Dr. Wells judiciously used the words and experiences of other men in the 108th – or other battle participants – to “fill in the blanks”; the substitutions are carefully annotated.

From the start, I got the sense that Wafer – perhaps already aware of the “uneven” early-war reputation of surgeons - seemed very sensitive to how fellow soldiers would view his behavior. He was reluctant to go the rear when under fire and had a great desire to “prove” himself.

“I think Wafer’s concern revolves around his status as a foreigner, an Irishman, and a surgeon,” Dr. Wells told me (she might have added a fourth “strike”: the fact that Wafer was Catholic). In an army with sometimes-nativist sentiments, “foreigners were often the targets of blame for Union defeats or disasters and Wafer never forgot where he came from,” she added.

Still, as part of the Army of the Potomac’s II Corps which included the famous Irish Brigade, Wafer probably was not subject to as much discrimination as he was in his homeland. Nevertheless, he “was unwilling to give anyone any reason to question his loyalty,” Dr. Wells said. The fact that Wafer was Catholic also brought him in touch with the famed chaplain Fr. William Corby, reinforcing the fact that “Corby’s influence and reputation spread beyond the Irish Brigade,” as she told me.

Indeed, in a letter written shortly after St. Patrick’s Day 1863, Wafer recounts to his brother the details of a private dinner with Corby, and described in great detail the beautiful vestments (“the most valuable article of clothing I ever saw, he wrote”) that Corby’s regiment had bestowed on their favorite priest. In another touching incident, Wafer tried to secure Corby’s assistance at the request of a dying soldier. Though he couldn’t locate the chaplain, Dr. Wells told me she believes it is testament to the fact that Wafer “saw his role as a surgeon in terms beyond the physical treatment of his patents…he was also interested in helping them secure spiritual peace.”

Civil War enthusiasts will be pleased that Wafer devoted nearly a quarter of his memoir to the months that intervened between the Battle of Gettysburg and the beginning of the campaigns in spring 1864, a period often overlooked (or dismissed as one of inactivity) in many military histories. Wafer describes his part in the skirmish at Auburn Mills and battles at Bristoe Station and Mine Run in great detail, with some close calls of his own. Of special interest is his description of how surgeons had to keep their field hospitals on the move to avoid proximity to fighting. Again, he took great pride in his care of his regiment’s wounded, noting with “gratification that…not one of the 108th was left on the field.”

Wafer’s memoirs and letters are absent very much discussion of the “nuts and bolts” and minutiae of Civil War medicine and surgery. Dr. Wells admitted that she was a bit disappointed, having hoped for “gritty and graphic descriptions” of the challenges and horrors of surgery. Still, she recognizes that Wafer – like any good writer – “knew his audience.” His letters home were “driven by a desire to reassure his family,” she told me, adding that “details of his disturbing and grotesque existence would have had the opposite effect.” Though it’s a guess on her part, Dr. Wells told me, “I suspect he was more forthcoming in conversations with his medical colleagues.”

That said, Wafer did wield a very able pen, and – like Dr. Wells – I was very impressed with his “style of writing, his diction, and his humor,” as she told me. In one of my favorite parts of the book, Wafer – trying to make his way back to his regiment – finds himself alone and lost “behind enemy lines.” His “spooky” description of the scene, his encounter with a pair of strangers, and his fear of being robbed – even murdered – is reminiscent of Poe or Bierce. Likewise, Wafer’s description of his experience at Gettysburg – the rain of iron, the howls of the wounded, the surgeons’ frustration at the sheer mass of casualties, and his own bone-weariness – are vivid.

Certainly, for me, the most heart-wrenching part of Wafer’s service is how debilitated he was on his return to Canada. When he left for the war, Wafer’s professors thought him “a strong athletic man of more than ordinary physical powers.” Upon mustering out, Wafer was – at only 35 – described as “very much emaciated and very feeble…to appearances completely broken down and ruined in health and constitution.” Within a few years, Wafer – who spent months bedridden - was not able to work, and he died in 1876. Dr. Wells describes with great detail the mourning of the Kingston medical and academic community as well as subsequent ten-year battle that Wafer’s family fought to secure a pension, a battle which they lost.

I found only a few things in Dr. Wells’s book with which to quibble, and they are minor: a) in the few places where significant parts of Wafer’s original writings are missing, her convention of substitution-in-brackets was a bit intrusive, b) there are some errors in names or places (e.g., Fort “Donaldson” instead of “Donelson”…twice), and c) a tendency – in the Introduction – to underestimate the sophistication of American surgeons at mid-century, compared to their Canadian and European counterparts.

That said, Dr. Wells has provided us with a welcome addition to the literature on Civil War medicine by making accessible a wonderful firsthand account of a surgeon who really did give his “last full measure of devotion.” Wafer’s memoirs and letters reveal quite well the atmosphere – prejudices, toil, and challenges - in which surgeons worked. Wafer’s postwar health problems are also witness to the fact that medical officers were not immune to the physical toll inflicted by the war. I happily recommend it to all.
Posted by Jim Schmidt at 8:22 AM

Your blog is outstanding!

Here is an entry about an American Civil War surgeon: