Here is the December 2008 installment of my "Medical Department" column from The Civil War News. Enjoy!

But whether on the scaffold,

or in the battle’s van

The fittest place for man to die,

is where he dies for man.

The old (and inaccurate) bromide, “Who ever saw a dead cavalryman?” could be applied as equally (and as inaccurately) to surgeons during the American Civil War. Over the course of the war, hundreds of medical officers were killed in action, died of battle wounds, by accident, in prison, or by disease and exposure.

Some have been justly and ably recognized. For example, Dr. Robert R. McMeens, a surgeon with the Third Ohio Volunteer Infantry who died in October 1862 from disease, was recently inducted into the Ohio Veterans Hall of Fame. Others were eulogized anonymously, as when Confederate surgeon Dr. Hunter Holmes McGuire – many years after the war – wrote of an unnamed surgeon who fell at Strasburg, “amid the cheers of soldiers at the evidence he gave of devotion to duty.”

One Union surgeon, Dr. James M. Newell, fell also; not in battle, yet no less heroically. Indeed, as one of Newell’s friends wrote, “there are other places besides the battlefield where heroism is to be displayed and where honor and infamy are to be won.” For Dr. Newell, that “other place” was the deck of a sinking army steamer on the in 1862. A place, as his friend added, “that severely tests a man’s character…whether he seeks his own safety…or whether he is ready to risk [and even] lose his life in the effort to save others.” Dr. Newell passed that test.

James Newell was born in in 1828, but – under unexplained circumstances – was forced to leave home at the age of seven. A kind benefactor in , took him in. Newell attended school in , where he was “distinguished for his studious habits, his faithfulness, and his good conduct.” He taught school for several years, then studied medicine under the tutelage of two physicians and attended lectures at medical schools in and . Newell then established his own practice, finally settling in , in 1860, where he arrived as a stranger, but received “a hearty welcome.”

In May 1862, “influenced by a desire for a still wider field of labor, and for improvement in his profession…and impelled by a patriotic desire to do something for his country in the hour of its peril,” Newell determined to offer his services as a surgeon in the army. He went first to , where friends from Sutton were already stationed, and where “his worth soon became known.”

In a letter home, Dr. Newell wrote, “Tell the people of Sutton that, if I live, I shall certainly return and resume my practice there. There seems a duty more important than taking care of the dear people at home just now. I know not how soon I may be upon the battlefield, but I shall try to do my duty.” In another, he wrote, “I have no doubt we shall see hard times, but I hope to be able to do my share in putting down this rebellion.”

One account has Newell with the 48th ; another with the “Roundheads” of the 100th . More likely he was assigned to general hospital duty. [Note: since the column was published I've found evidence that Dr. Newell was a Contract Surgeon]. In any event, Newell was attached to Gen. Ambrose Burnside’s command in , , but was left behind to help care for several hundred sick soldiers while the rest of the command joined the Army of the . After a short stay, Newell left on the steamer West Point for Aquia Creek, with hopes to reach and then return home for a short furlough to see Frances, his wife of less than three years. Also on the steamer were nearly three hundred soldiers - well enough to return to their regiments - as well as a handful of officers’ wives and children. 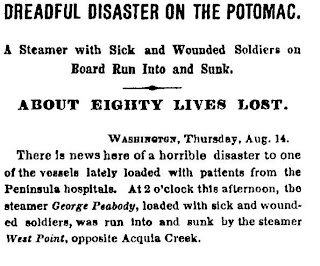 Late on the evening of August 13, 1862, just off Ragged Point, the passengers on the were “startled by a shock,” and soon discovered that their craft had collided with another army steamer, the George Peabody. The West Point sank in just minutes, “in four fathoms about one mile and a half from the Maryland shore,” with nothing left to be seen but “her smokestack, masts, and some wrenched-up planks on her deck."

Reports of the accident circulated quickly and widely in the press. “Dreadful Disaster on the !” declared the Columbia Spy in its headline. “Distressing Calamity!” exclaimed the pages of the Altoona Tribune. Soon, details of the accident made their way into the newspapers, as did a list of more than seventy missing passengers, including dozens of soldiers, three women, a child, and Dr. James M. Newell.

The news of Dr. Newell’s loss came to Sutton by telegraph, “filling all hearts with sadness, though not without a gleam of hope that he might have been saved.” Indeed, more than two hundred people were rescued soon after the collision, and a few bodies were recovered that same night. Dr. Newell’s body eventually washed ashore in , where “Rebels…had plundered it of everything valuable.” The body of one of the three ladies was found “clasped to the body of Dr. Newell” and the two were buried together, it “being supposed that they were husband and wife.”

How did Dr. Newell “pass the test”? One report told of the surgeon being “last seen on the upper deck of the West Point…standing nearly up to his waist in the water holding the little boy in his arms, while the ladies were standing by him and clinging to him for protection…exhorting them to be calm.” Another dispatch declared that the “survivors testify to [Dr. Newell’s] gallant conduct in endeavoring to the last to rescue the unfortunate ladies. He remained by them exerting himself for their safety, and had he been less chivalric might have escaped with his life.” 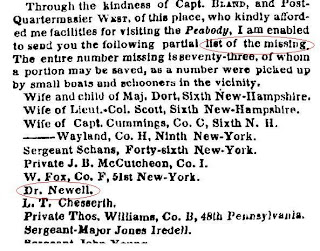 A Sutton man brought Dr. Newell’s body back home from Virginia, and on September 14, 1862, the Rev. George Lyman administered a burial service at Sutton’s Congregational Church, where the “national flag, draped in black, hung from the gallery…and military standards rested upon the coffin in front of the pulpit, also draped in black.” Lyman’s moving sermon – from which many of the details in this article were drawn - was published as a twenty-page pamphlet in 1862: A Discourse Commemorative of the Late James M. Newell, M.D. of Sutton, Mass., Surgeon in the U. S. Army, Who Was Lost on the Potomac River, Aug., 13, 1862.

In the sermon, Lyman gave a brief biography of Newell’s youth and arrival at Sutton, his desire to serve the Union, details of the steamer collision, his heroism, death, and lessons that could be found in Newell’s life. Lyman also spoke of what he saw as the qualities of a good physician, all of which he saw in Dr. Newell: “requisite skill…genuine benevolence…and love for his profession.” While much has been written about the relationships of surgeons with their regiments, Lyman reminded his parishioners that “a good physician is an invaluable blessing to a community,” and that when Newell – and thousands like him – left to join the ranks as an army surgeon, he was sorely missed at home.

In closing, Lyman declared, “Among all those heroic men who have given up their lives on the battlefield, none have died more honorably or heroically than our friend. It is well that he died as he did. It was a most fitting close to a laborious, useful and honorable life.”

For my part, I am very interested in learning more about the 1862 collision of the West Point and . If anyone has information, contacts, period documents, etc., that they can share, please contact me at jschmidt at lexpharma dot com. My interests include the collision itself, Dr. James M. Newell, post-accident investigations of the steamer pilots, stories of survivors and victims, investigations of contractors who provided “shoddy” steamers, the government’s “Steamboat Inspection Service,” and whatever else readers think may be relevant.

Bravo ! A great story. So many brave & noble lives were lost in this war. It is an honor to read of their sacrifice and deeds as individuals.

I wish I had something more to offer about this maritime disaster. It reminds me of the wreck of the Lady Elgin on Lake Michigan, 1860. George Lucas Hartsuff was aboard and tried to help save lives while the ship went down. I think 200 or 300 people died in the wreck. Hartsuff who later attained a high command in the Union Army said it was the most harrowing event he experienced in his not so dull life! I've been able to find some more info out about this wreck. Next time I visit LA Central Lib. I'll see what I can find out about this.

Brad - Thanks a bunch. I got some additional archive material and newspaper clippings from another reader, which was great. There were a number of fatal ship accidents during the war, but this one really struck me due to the loss of women and children, and other reasons. The Lady Elgin accident is a good analogy, indeed. I learned about that one when I lived in Chicagoland a few months back