As a pharmaceutical research scientist by day, I have a great interest in the history of my profession and industry. For better or worse (I think, for better), "snake oil," "nostrums," "patent medicines," - whatever you want to call them - are a part of that history. They are also an important part of the history of the Civil War.

I was happy, then, to recently launch a three-part series on "Civil War snake oil" for my "Medical Department" column in The Civil War News. Part I - "The More Things Change" - appeared in the most recent issue (January 2009). As I've mentioned before, the beauty part of posting my columns on this blog after they appear in print is that readers will find great hyperlinks to column content. Enjoy! And Happy New Year to All of You!

PATENT MEDICINES AND THE CIVIL WAR

PART I – "THE MORE THINGS CHANGE…"

“Perhaps no past age in the history of this country has teemed with such a multitude of medical mountebanks as the present. The venders of patent medicines in almost every capital town in the are fattening on the weakness and folly of a deluded public.”

The use of patent, proprietary, or “quack” medicines and nostrums began in colonial , continued through the early 1800s, accelerated during the Civil War, and then declined after the 1930s. Patent medicine vendors – North and South - marketed their products heavily to soldiers during the Civil War. Likewise, the soldiers – satisfied that the remedies had provided the needed relief - happily provided testimonials which were published in advertisements in widely-circulated newspapers such as Harper’s Weekly.

Dr. Michael Torbenson, of the , has done some recent and interesting research and writing on the role of patent medicines in 19th- and early 20th-century . He was kind enough to answer some questions about the role of these products during the American Civil War.

Dr. Torbenson received his B.S. in Biology from the University of Minnesota-Duluth and his M.D. from the in 1995. After a residency and fellowship at the University of Pittsburg Medical Center, he arrived at Johns Hopkins in 2000, where he is now an Assistant Professor in the Department of Pathology at the , where he specializes in gastrointestinal and liver pathology.

“Pathology is a specialty within medicine that focuses on diagnosing diseases by examining tissues and blood samples,” Dr. Torbenson explained to me. “In addition to this role as a diagnostic pathologist, which is directly related to patient care, I also study more basic disease processes and have a research laboratory that focuses on viral hepatitis and liver cancers.”

The author or co-author of dozens of articles in the medical literature and the author of several book chapters on gastrointestinal and liver diseases, Dr. Torbenson has also written a number of articles on his other passion – patent medicines – that have appeared in Pharmacy in History, Historical Archaeology, the Journal of Biocommunication, and other publications. They include:

Dr. Torbenson’s interest in nostrums started many years ago. “When I was growing up, my brother Mark and I were out playing in the woods and one day we came across a tree that had been blown over by the wind,” he told me. “Within the roots, a few glass bottles could be seen poking out. We cleaned them off and found them to be old household and patent medicine bottles. We spent the rest of that summer digging for bottles and had a great time.” Dr. Torbenson was hooked!

“Later, when I was in medical school, it became increasingly difficult to hunt for bottles and, with a small apartment, space was limited,” he added. “So I began to gradually switch over to trade cards (about the size of baseball cards and given out freely by nostrum makers by the millions), which allowed me to continue to enjoy the collecting aspect of the history of medicine.” In time, Dr. Torbenson realized that he could combine his interests in collecting with his training in research, and he focused on the patent medicine industry of the 19th and 20th centuries.

Though terms such as “nostrum,” “patent medicine,” “proprietary medicine,” “quack medicine,” etc., are used interchangeably, there are some fine points of distinction which Dr. Torbenson clarified for me. “A nostrum (from the Latin nostrum remedium, ‘our remedy’) is any medicine whose composition is kept secret,” he wrote, adding, “a proprietary or patent medicine is generally any medicine with a possessive title.” The phrase “patent medicine” comes from the late 17th-century marketing of medical elixirs issued “letters patent” which authorized the use of royal endorsement in advertising.

To complicate definitions further, a change in the law in 1860 allowed actual patents to be granted for medicines. In my own research I came across U. S. Patent No. 45,028, awarded during the Civil War to Anson Dart for his “Improved Compound Oil” composed of “an oil of the dwarf olive” and an oil from the seeds of a musk-melon “not known to grow anywhere except in Hindostan.” Still, a patent did not lend any more scientific merit than the nostrums with secret formulas, as witnessed by Dart’s outlandish claim, “It is as sure a prevention to taking the venereal diseases as that water will quench fire.”

Dr. Torbenson identified the peak time of ’s “nostrum era” from about 1860 to 1930, including the American Civil War in which both and Confederate soldiers suffered much illness and often self-medicated. He attributes their popularity and success to several important economic and social factors, including the rapidly growing population (a good part of which had limited access to physicians), the limited efficacy of traditional medicine, technological improvements in printing and advertising (especially lithography), and – later – the genesis of machine-made glassware.

“I think it is very difficult to give primacy of one factor over another,” Dr. Torbenson admitted, adding, “My sense is that the lack of confidence in traditional medicine created an environment where patent medicines could flourish.” 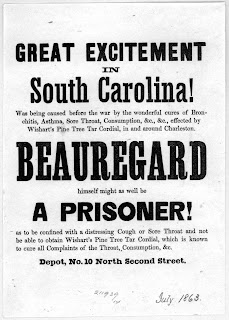 To be sure, Civil War soldiers had their own “lack of confidence in traditional medicine” – due in no small part to the purgatives dispensed by regimental surgeons – and often chose to treat themselves. Camp sutlers and families back at home obliged by selling or sending any number of remedies, including “Hostetter’s Celebrated Stomach Bitters,” “Brandreth’s Pills,” “Ayers Sarsaparilla,” “Radway’s Ready Relief,” and other nostrums. The makers of Hostetter’s invited the Union Army’s Surgeon General and medical staff to “give this powerful medicated stimulant a fair trial…for the sake of the lives of thousands of brave men now fighting for the old flag in infected districts.”

Many soldiers - recovered from their various ailments – gave credit to the nostrums they had taken and happily provided testimonials. One maker, for example, printed the tribute of dozens of men in the 17th New York State Volunteers, who declared that “we used Brandreth's Pills during our two years service, and to them we attribute the fact that our constitutions are uninjured by the necessary hardships and privations of a soldier's life in the field,” adding that, “that if every soldier was supplied with this medicine the general health of the army would be greatly improved.”

For those interested in learning more about the growth of the patent medicine industry, Dr. Torbenson recommends James Harvey Young’s Toadstool Millionaires (Princeton University Press, 1961, available in full text here!) – which includes an excellent chapter on “quack” medicines in the Civil War - as a good starting point. “In addition to some great books put out by medical historians, I have found that some of the books written by the collecting community are excellent resources too, such as Western Bitters by Bill and Betty Wilson,” he told me.

Lest we get too smug about our modern sensibilities and scientific sophistication and think we would not fall for the claims of Brandreth’s Pills, Hostetter’s Bitters, or Anson Dart’s combination of oils, consider how popular similar claims are these days, such as “lose weight without diet or exercise!” or any number of products for…ahem…”male enhancement.” On a more serious note, the past decade has also seen an increase in “quack” cures for HIV/AIDS, cancer, lyme disease, and other serious illnesses. Truly, the more things change, the more they stay the same.

Next month – Part II – “The Soldier’s True Friend” – In the next installment of the column I will discuss Thomas Holloway’s pills and ointments, which were widely advertised to and used by Union soldiers and their families during the Civil War. Part III will examine Abraham Lincoln’s experiences with nostrums.