As promised in my last post, I wanted to give a flavor of Dr. Harry Herr's chapter, "His Privates Were Shot," in our forthcoming book, Years of Change and Suffering: Modern Perspectives on Civil War Medicine, by posting my February 2006 "Medical Department" column for The Civil War News, which included an interview Dr. Herr.

“Case 1060: Wounded by a ball in the left of the scrotum, passing backward and wounding the testis, urethra, and rectum. The man was taken from the field on the second day after the fight and a catheter could not be passed. The urethra, near the bulb was laid open, and urine escapes through the scrotum and a greater portion of it comes by the anus. Gum-elastic catheter finally passed into the bladder but dispensed with after fistula closed and some phosphatic deposition. Right testis gone; persistent urethral fistula; incontinence of urine and severe pain on exercise; occasional discharges of matter from urethra and rectum; disability total.”

The above reports, by Surgeon A.H. Agard and a pension examiner, on a 21-year old private from the 8th Ohio Infantry wounded during the Battle of Cold Harbor, June 3, 1864, give graphic and grim witness to the debilitating nature of urethral wounds suffered by soldiers during the American Civil War. Although generally not as fatal when compared to wounds of the chest or abdomen, urethral injuries were very troublesome for surgeons to treat and survivors dealt with serious and painful consequences – physical and emotional - for the rest of their lives.

The nature, care, and outcome of nearly 1,500 documented wounds of the genitourinary organs during the war are the subjects of two excellent articles in recent issues of the Journal of Urology: “Urological Injuries in the Civil War” (Nov. 2004, Vol. 172, pp. 1800-4) and “Urethral Injuries in the Civil War” (April 2005, Vol. 173, pp. 1090-3); both written or co-authored by Dr. Harry W. Herr. The authors drew on information in the Medical and Surgical History of the War of the Rebellion (MSH), case reports published in period medical literature, and pension records in the National Archives.

Dr. Herr is a board-certified urologist on the staff of Memorial Sloan-Kettering Cancer Center, Cornell University Medical College, in New York City, where he specializes in urologic oncology and bladder cancer. He received his MD from the University of California at Irvine, and did his residency at the University of California Medical Center. Dr. Herr was kind enough to answer my questions and provide some information and opinions not included in the journal articles.

“I have had a long interest in the Civil War – since I was a teenager. Why? Because the war defined our country. I’ve also long had an interest in Civil War medicine, for many reasons, but mainly because that time began the era of scientific medicine,” Dr. Herr told me. He is interested in all aspects of Civil War medicine, and since urological injuries had never been compiled before, Dr. Herr’s work definitely adds something new to our understanding in this area.

Indeed, one of the features of the 2004 article is the systematic compilation of 1,497 reported urological cases in the war as to frequency, type, site, and outcome, with a number of tables that break the data down into detail. Since soldiers sometimes fought kneeling, sitting, or lying prone, they were exposed to being shot in the buttocks or genitals. The illustration in this column, provided by Dr. Herr, demonstrates a number of the organs that could be affected, including the kidney, bladder, prostate, urethra, penis, testis, and spermatic cord. The organs could be penetrated by the bullet directly or be perforated indirectly by bone fragments.

The statistics demonstrate that injuries to the kidney and bladder were particularly serious, with mortality rates >50%, primarily due to sepsis caused by loss of urine into the surrounding tissue. Surgeons of the day recognized that patient survival often depended on the prompt drainage of urine to protect the body from infection. Unfortunately, Dr. Herr found that the average time from injury to receiving surgical care for urethral injuries was five days.

In his 2005 article, Dr. Herr describes the catheters of various materials (including silver, gutta-percha, gum elastic, and caoutchouc) and sizes that were included in surgical instrument field kits and routinely used for the purpose of diverting the urine. He also quotes extensively from the MSH with examples of at least a dozen specific cases that demonstrate the various strategies that surgeons used to deal with urethral injuries. Especially interesting are Dr. Herr’s comments after some of the case reports explaining how modern techniques may have saved some lives.

Injuries to the penis and testis were not rare. Dr. Herr found reports for more than 300 shot wounds to the penis (and at least one bayonet wound) and nearly 600 cases of testicular injury. A small number of the cases were fatal, usually from subsequent infection or associated wounds. Dr. Herr points out that erections hindered healing and in addition to the use of camphor enemas, patients were “exhorted to shun lascivious thoughts.”

In addition to the consequences of pain, Dr. Herr told me of another unfortunate cost of these types of injuries: “Sexual dysfunction after pelvic injuries was undoubtedly common, but at that time, for many reasons, it was not widely talked about, and there were certainly no treatments. In the pension files of the National Archives one can find mention of impotence and depression related to loss of sexual function.”

So what exactly did they do right? In the article, Dr. Herr points to a number of important lessons from the Civil War: surgeons learned when and how to débride devitalized tissue, control hemorrhage, and allow for drainage of urine using catheters; they experimented and perfected new urological surgical techniques; they questioned the wisdom of leaving a catheter in too long; and they recognized that castration and emasculation were often too hastily resorted to.

In the end, though, it was the surviving patient who carried the traumatic and devastating consequences – physical and psychological – of these wounds.

An exhibit on all aspects of Civil War medicine debuted at the American Urological Association’s (AUA) Annual Scientific Meeting in San Antonio, Texas, in May 2005. The exhibit is now on display at the William P. Didusch Center for Urologic History at the AUA headquarters building, just outside of Baltimore. The exhibit panels and the exceptional exhibit 22-page brochure can be viewed and/or downloaded (as a PDF) from the Center’s website. 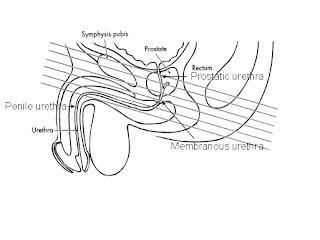 Anatomy of the male urethra, with lines showing how bullets traversing the pelvis may injure the urethra. Illustration courtesy of Harry W. Herr, MD.
Posted by Jim Schmidt at 7:12 PM