Soon, I will post some more on the great time I had at the SOCWS conference last weekend, but I wanted to write something about a most interesting book I read on the plane and in my spare time: 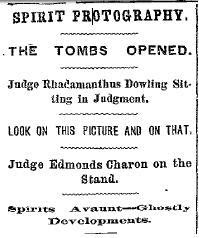 A couple of months ago, Brian Dirck wrote (yet another!) interesting post on his terrific A. Lincoln Blog regarding "Lincoln Hoaxes." Among the hoaxes he listed was the photograph of Mary Todd Lincoln with the "spirit" of Abraham Lincoln behind her, hands on her shoulders. Brian made the additional point that he did not find the hoax very funny. I was somewhat familiar with the photograph having read about Mumler's trial for fraud in doing other research on P.T. Barnum (who testified for the prosecution at the trial).

I wanted to learn more as the subject of "spirit photography" cut across an amazing number of topics of recent interest: Barnum, the Lincolns (especially having read Jason emerson's terrific The Madness of Mary Lincoln), Victorian mourning rituals, the Spiritualist movement, and more. 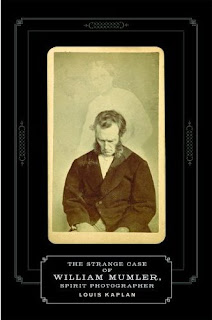 I came across an interesting and relatively new book, The Strange Case of William Mumler, Spirit Photographer by Louis Kaplan. Dr. Kaplan is an associate professor of history and theory of photography and new media at the University of Toronto and director of the Institute of Communications and Culture at the Mississauga campus and the author of other books on the history of photography.

In the main, the book is a compilation of primary documents regarding Mumler, his "practice," and the 1869 trial. The sources include reports from the press - mostly New York newspapers, Spiritualist publications, and period photography journals - from the Civil War era as he began to publicize his "discovery" of "spirit photography."

Next are excerpts from The Personal Experiences of William H. Mumler in Spirit Photography (1875). Next are documents concerning the trial, including the prosecution's closing statement and press coverage. Also included is P. T. Barnum's expose of "spirit photography" from his autobiographical Humbugs of the World. Kaplan wrote an expert and readable essays for the Introduction and Conclusion in which he covers an array of topics.

The book was most interesting and I recommend it to anyone interested in the topics I listed above, and more.

Below is an excerpt from Mumler's description in his Personal Experiences in which he describes the visit of Mrs. Lincoln (an avid Spiritualist) to his "spirit photography" studio. 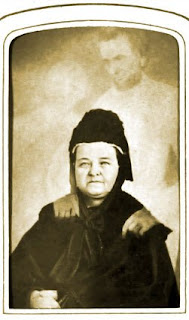 I will commence with MRS. LINCOLN widow of the late lamented President. I had just finished taking a picture for a gentleman who resides in Canada, when the door-bell rang, and a lady dressed in black, wearing a crape veil, was ushered in. The veil was so thick it was impossible to distinguish a single feature of her face.

Without raising her veil she spoke to the gentleman for whom I had just taken a picture, saying, "Have you had a picture taken, sir?" He replied in the affirmative. "Do you recognize it?" she asked. He answered, "Well, I am not much used to looking at a negative, but I think I know who it is."

Then, turning to me, she said, "What do you charge for these pictures?" I stated the price, and she decided to sit for one. I requested her to be seated; would be ready for her in a moment. I went into my dark room and coated a plate. When I came out I found her seated, with her veil still over her face. I asked if she intended to have her picture taken with the veil? She replied, "when you are ready I will remove it." I said I was ready, whereupon she removed the veil, and the picture was taken.

I then requested her name for the purpose of recording it in the engagement book. "Mrs. Lindall" was given. Mrs. L. asked when she could have the pictures; and was told, in about three days. The negative, marked "Mrs. Lindall," was sent with the others to my printers. The pictures were returned only a few moments before Mrs. Lincoln called, and laid on my desk, in envelopes, with the names on the outside that were on the negative - Mrs. Lindall's among the rest. I was away at the time, and consequently had not the slightest idea that I had a distinguished sitter.

My wife was engaged in conversation with a lady-friend when the door-bell rang, and a lady was shown in. She asked if her pictures were ready? My wife asked, "What name?" The lady replied, "Mrs. Lindall." Mrs. M. then went to my desk, and looking over the package of pictures, found one marked Mrs. Lindall, which she handed to her, and then continued the conversation with her friend, who by-the-way, being of an inquisitive turn of mind, asked Mrs. Lincoln (who was at this time examining her picture closely), if she recognized the likeness? Mrs, L. replied, hesitatingly, "Yes."

My wife was almost instatntly entarnced, and, turning to Mrs. L., said, "Mother, if you cannot recognize father, show the picture to Robert; he will recognize it."

"Yes-yes dear," Mrs. Lincoln said; "I do recognize it; but who is now speaking?" she asked. The control replied: "Thaddeus!"

A long conversation ensued. Mr. Lincoln afterwards controlled and talked to her - so the lady-friend informed me who had thus unexpectedly been a witness of this excellent test.

When my wife resummed her normal condition, she found Mrs. L. weeping tears of joy that she had again found her loved ones, and apparently anxious to learn, if possible, how long before she could join them in their spirit home. But this information of course could not be given. Mrs. Lincoln then related how she lft Springfield, Ill., for the sole purpose of visiting my studio, and having a picture taken as a test. For that express purpose she traveled in cog. When she arrived in Boston, she came directly to my house, before visiting a hotel, for fear that some one who knew her might see and recognize her, and thus defeat the object for which she had taken such a long journey.

The picture of Mr. Lincoln is an excellent one. He is seen standing behind her, with his hands resting on her shoulders, and looking down, with a pleasant smile.
Posted by Jim Schmidt at 5:20 PM