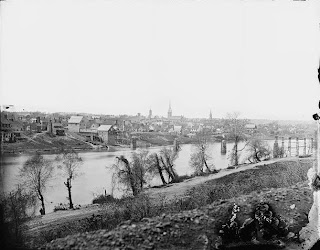 One of the prominent features of Fredericksburg - as you can see from the period photo - are the city's churches, which dominated the city's wartime skyline. As someone very interested in Civil War medicine, it's especially interesting to know that all of the period churches were used as hospitals after the major battles of 1862, 1863, and 1864.

Fortunately, there is a great new book that describes in detail the role that some of these churches played before, durin, and after the Civil War, and how - in turn - the war affected the churches. That book is Historic Churches of Fredericksburg, and I had the great pleasure of interviewing the author, Michael Aubrecht, for my most recent (May 2009) "Medical Department" column in The Civil War News, which is reprinted below with hyperlinks galore. Enjoy!

IF THESE WALLS COULD TALK
By James M. Schmidt
The Civil War News – “Medical Department” – May 2009
“At an early hour Dr. Cutter called on fourteen men…to go with him to the city, to establish hospitals there…in a short time we had four ready for occupancy, we were then ordered to clear the Baptist church…the armies had met and the wounded were rapidly brought in…Then in the outer rooms of the church the surgeons began to cut and slash…” - Diary of John Bailey, Ninth New Hampshire 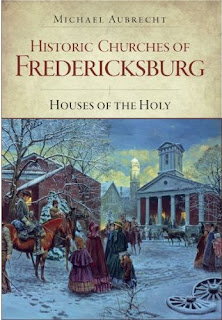 In his recent book, Historic Churches of Fredericksburg: Houses of the Holy (The History Press, 2008, 128 pp., $19.99), Michael Aubrecht provides a look at disunion, war, and reconstruction (literally and figuratively) as experienced by Secessionists, Unionists, and African Americans in Fredericksburg, Virginia’s landmark churches during the Civil War era.

Readers of this column will especially enjoy the book due to Michael’s significant attention to the use of the churches as hospitals – indeed the town itself was referred to as “one vast hospital” - and the subsequent damage due to that use.

To document the history of five Fredericksburg churches during the war, Michael drew on an impressive array of sources, including archival material from the individual churches; sources at the Fredericksburg and Spotsylvania National Military Park; soldier and civilian journals, letters, and memoirs; and – most interesting – postwar “Court of Claims” documents. The book is handsome and is amptly illustrated with more than eighty photographs and engravings. The narrative is lively, especially when Michael incorporates first-hand accounts.

Each chapter begins with a brief sketch of the church’s origin, a lengthy section on the wartime experience of the church (for the building and parishioners), how the church and community were rebuilt postwar, and the state of the church today. Though the book lacks annotation or an Index, the author’s attribution of material in the book is clear enough that readers will not have difficulty identifying sources from the Bibliography.

Michael Aubrecht lives in Fredericksburg, Virginia, near the historic Massaponax Church and just a few miles from the “Stonewall” Jackson Shrine. He is a professional (and award-winning) art director and designer with historical interests in both the Civil War and baseball. Michael is the author of three previous books as well as hundreds of articles as a contributing writer for Baseball-Almanac.com. Frequently the two subjects coincide in both articles and in consulting for reenactments of period games. You can visit him on the web here. He was kind enough to answer my questions about Historic Churches of Fredericksburg.

In choosing the churches for the book, Michael selected what he “believed to be the more noteworthy congregations for the book in terms of their experiences during the Civil War,” adding, “I also wanted to strictly cover landmark churches that are still standing today.” That said, he did acknowledge that other denominations and faiths had active communities in Fredericksburg. “There were Catholics who attended St. Mary’s, although they were in the minority at the time. There were also Jewish settlers in Virginia although there were no synagogues in the area,” he told me.

While most Civil War enthusiasts are familiar with the beating that Fredericksburg homes, businesses, and churches took from artillery bombardments (by both sides, Michael points out) during the war, they are probably less familiar with the tremendous scarring of the inside of these houses of worship. “I’m sure anyone who has ever seen photographs of the town would agree that Fredericksburg looked like hell during the Civil War,” Michael told me. “Of course, the interiors of the churches were absolutely devastated from hospital use and some were even commandeered for stables. Most were completely unusable until after the war in 1865.”

As evidence, he quotes Major St. Clair Mulholland of the 116th Pennsylvania, who remembered one post-battle scene, writing, “In the lecture room of the Episcopal Church eight operating tables were in full blast” and “the floor was densely packed with men.” Sunday school teacher at the city’s Presbyterian Church recalled that “Federal forces occupied the building for a hospital. They tore all of the pews out…the church was completely gutted…[they] used most of the pews to mark the graves of the soldiers.” A nurse stationed at Fredericksburg’s United Methodist Church wrote, “they had the pews knocked to pieces; under the backs and seats [they] put a cleat and made little beds.”

After the war, the churches sought to recover the cost of the damages. Indeed, among the most interesting sources that Michael cites in the book are postwar "Court of Claims" inquiries and documents. “Those documents are prized pieces in my reference library,” Michael told me. Churches that were involved in the Battle of Fredericksburg - or any battle for that matter - submitted itemized claims to the court of the United States government, as a petition to recover the cost of damages.

“All of these cases took years to come to fruition and involved a tedious and detailed investigation whereby members of the congregation, as well as unbiased witnesses, testified in order to prevent the commission of insurance fraud,” Michael explained. “The required criteria for granting a claim involved several factors that had to be determined by the panel conducting each investigation.”

To be sure, the book is not all about battles, bombardments, and amputations. In describing the origins of each church, Michael describes interesting theological differences that led to splits among the denominations before the war. His discussion of the treatment of the city’s population of enslaved African-Americans and how they worshiped is very enlightening. There are also some very moving scenes in the book, such as when Union soldiers worship with civilians of the occupied city.

Even as a Fredericksburg resident, Michael found that he had more to learn about the city’s role in the war. “I was familiar with the political and military aspects of the town and its place in history. However, I didn't know the points of view from the everyday people,” he told me. “This project actually pushed me to look in places that I had never been. The conflict and division that existed prior to the war - politically, socially, and spiritually - was a real eye opener,” he added.

Michael encourages visitors and tourists to Fredericksburg not to limit their visits to the area battlefields. “The best reason to tour the churches is that there is something of interest for everyone,” he told me. “The walk itself takes you through the beautiful streets of Old Town, the classic architecture and interiors of the buildings are breathtaking, the history is literally everywhere you look, and the people who work and attend these churches are some of the nicest that you could ever hope to meet.”

the Tiffany stained-glass windows at St. George’s Episcopal
the artifact room at Fredericksburg Baptist
the magnificent pipe-organ at Shiloh Baptist (Old Site)
the courtyard at the Presbyterian Church, and
the bell tower at Fredericksburg Methodist.

“Be sure to bring a camera, too, as there are plenty of plaques, tombstones, and markers to photograph,” he added.

Presently, Michael is in the process of completing a baseball book entitled, You Stink! Major League Baseball’s Terrible Teams and Pathetic Players, with co-author (and Civil War historian and author) Eric Wittenberg. He’ll then return to the Civil War with Campfires at the Crossroads: Confederate Encampments in Spotsylvania County, part of the new “American Chronicles” series at The History Press.

As if that wasn’t enough, Michael is active on the board of the National Civil War Life Foundation, advising documentary projects, and maintaining a steady speaking schedule. Michael concluded by stating, “I’m really blessed to live in a community that is saturated in Civil War history, as there is always something rewarding for people like us to do.”
Posted by Jim Schmidt at 4:06 PM

Thank you Jim. I appreciate your praise more than I can say.

Just came across your blog. My great grandfather was an assistant surgeon with the 11th Pennsylvania Volunteer Infantry at Gettyburg. He waswas, for a few days, a prisoner under Confederate guard during the Battle of Gettysburg. Most of the surgeons from the Second Division of the First Corps, I'm told by the ranger at Gettysburg, set up in Christ Lutheran Church on Chambersburg Street, where they treated wounded soldiers throughout the night and during the ensuing days of battle.

I look forward to visiting your blog. A new interest is the Civil War here in the NW. Few know that George Pickett was a captain out here in Washington State from 1856-1861. The nephew of Jefferson Davis was also with him at Fort Bellingham. They left after the attack on Fort Sumter. There was a lot of intrigue out here.