A few months ago I posted Parts I and II of my continuing series on the interesting and important role that "patent medicines" played in the American Civil War for my "Medical Department" column in The Civil War News.

Part III has now appeared in the June 2009 issue and is re-printed below for your enjoyment. Part IV - regarding how patent medicine manufacturers marketed their nostrums specifically to veterans many years after the war will appear next month. Stay Tuned!

PATENT MEDICINES AND THE CIVIL WAR - PART III
“LINCOLN’S RENOWNED REBEL EXTERMINATOR”
By James M. Schmidt
The Civil War News
“Medical Department” – June 2009
In the first installments of this series, I described the rising popularity of so-called “patent medicines” up to the years of the Civil War and the booming numbers of nostrums during the war and after. As the leading figure of the nineteenth century, it is no surprise that Abraham Lincoln had his own association with patent medicines, from his days as a lawyer in Springfield, to his inauguration, his presidency, and many years after his assassination. 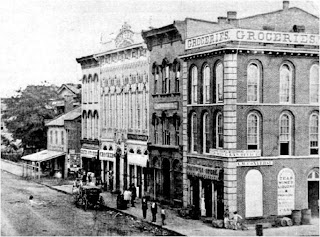 When medical historian Dr. James Harvey Young acquired the papers of the Birchall & Owen drugstore in Springfield, he found Lincoln listed among their many customers, although he seems to have bought more ledgers for his law practice than many drugs. James Hickey – longtime curator of the Lincoln Collection at the Illinois Historical Society – published a detailed account of the Lincoln family’s ledger at Springfield’s Corneau & Diller Drug Store. He found that they purchased a wide variety of patent medicines, including Wright’s Indian Vegetable Pills, Wistar’s Balsam of Wild Cherry, cordials, sarsaparilla, hair restoratives, and “Brown Mixture” – Corneau & Diller’s own concoction for colds and coughs.

Once Lincoln was elected, one patent medicine maker jumped at the chance to take advantage of the president-elect’s popularity. In early 1861, the proprietors of “Bellingham’s Stimulating Onguent for the Hair and Whiskers” published advertisements in the New York Times, New York Herald, and Vanity Fair, implying that Lincoln’s beard could be attributed to their nostrum. One of the advertisements stated:

PRESIDENT LINCOLN (three times)
DID YOU SEE HIM? (four times)
DID YOU SEE HIS WHISKERS? (three times)
RAISED IN SIX WEEKS BY THE USE OF BELLINGHAM'S ONGUENT (six times)
There is no evidence that Lincoln ever used Bellingham’s whisker potion, but, as Dr. Young wrote in his history of patent medicines, The Toadstool Millionaires, “It was nothing new, of course, for an American nostrum maker to stretch the truth, nor was there any novelty in an advertisement that linked a patent medicine with the news of the hour.” 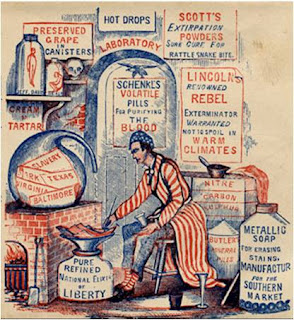 One manufacturer of Civil War “patriotic covers” – envelopes featuring various sentiments of patriotism or caricatures of the enemy – took advantage of the popularity of patent medicines and Lincoln by featuring him as a chemist/alchemist. The engraving shows Lincoln stirring a concoction in a vat labeled “Pure Refined National Elixir of Liberty.” On the floor and shelves around him are other bottles with clever names, such as “Lincoln’s Renowned Rebel Exterminator” (“Warranted Not To Spoil in Warm Climates”).

Once Lincoln took office, he was bombarded with correspondence of all types: people seeking favors and positions in office; advice on strategy for the war; ideas for war-winning inventions; and, not surprisingly, letters accompanying gifts of patent medicines or formulas for certain cures. For example, in June 1861, Peter Miller of Chautauqua Co., New York, wrote President Lincoln:

“Having been engaged the last three years in the sale of medicines from Pierpont & Co…and having witnessed the instant relief, and permanent cure of many of the various ailments for which Dr. E. Cooper's Universal Magnetic Balm is recommended…I have thought it might be well to send ‘Our President’ a small supply…Please accept the same and do not fear to trust it as you would a true friend -- administer to your own family and friends, (especially to Gen. Scott) note its effects and write to me giving the result.” 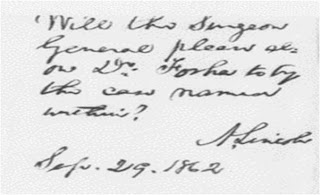 As if Lincoln didn’t suffer enough second-guessing of his handling of military affairs, he was also bothered by correspondence from his Cabinet regarding the use of quack medicines in the Army hospitals. In September 1862, Salmon Chase – Secretary of the Treasury – wrote Lincoln in distress upon “hearing that a poor fellow from Ohio [Chase’s home state] was suffering severely from a wound in the hand…” and asked Lincoln to press the Surgeon General to give his consent to allow a “Dr. Forsha” to “try his Balm on the wound.” Chase added, “I really think it a duty to our wounded & suffering soldiers that…trial be made of a remedy which seems likely to do so much good.” Lincoln acquiesced by endorsing the note, “Will the Surgeon General please allow Dr. Forsha to try the case named within?”

Three months later, perhaps impatient with the lack of cooperation from Hammond, Dr. Forsha wrote directly to Lincoln, declaring, “If the President will give me the charge of a hospital…to use my owne Medisen in and up on the wounded Soldiers for three months I will insure ninety percent of all the flesh wounds to be well and the Soldiers to be in a healthy condition and fit for duty within thirty days from the time I take them.”

Attorney General Edward Bates intercepted the note and forwarded it to Lincoln with his own message, acknowledging, “It is evident that Dr Forsha is not much of a Scholar. But he certainly has great curative powers; and really works wonders in relieving pain and healing wounds. I do really wish that some of our poor, suffering soldiers could have the benefit of his successful practice.”

Finally, in February 1863, Surgeon General William Hammond wrote President Lincoln, “I have met with Dr. Forsha before, and am satisfied that he is an ignorant quack. The fact that he keeps his preparation a secret is sufficient proof…of his charlatanism.” Hammond thanked Lincoln “for referring the matter to me, and thus saving the Medical Corps the disgrace, and the sick the injury which would result from placing this man in charge of a Hospital.”

As additional evidence, Hammond included a letter from Dr. Meredith Clymer, who declared that the previous summer he saw, “several officers…who had been severely wounded…& whose wounds had been dressed…by a Dr Forsha. A very irritating & pungent preparation had been poured into the wound…In every case it had done harm.” 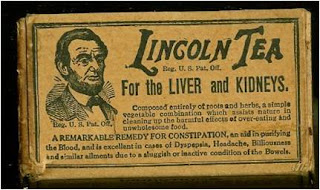 Just as the owners of “Bellingham’s Onguent” took advantage of Lincoln’s popularity before he took office, another company took advantage of Lincoln’s enduring popularity many years later. In the late 1890’s, the Fort Wayne Drug Company introduced “Lincoln Tea for the Liver and Kidneys,” which the firm billed as a “Remarkable remedy for constipation, an aid in purifying the blood, and is excellent in cases of dyspepsia, headache, biliousness, and similar ailments due to a sluggish or inactive condition of the bowels.”

Of the portrait of the martyred president featured on the front of each box, one writer - in a 1901 issue of the Medical Sentinel - found the engraving “grand, gloomy and peculiar,” adding, “Beneath it was the statement that Lincoln Tea moves the bowels. It seemed that the great old countenance took on a pitiful expression to think that it was used as an appeal to the constipated world.”

While the “Great Emancipator” might have resigned himself to being the “Great Un-Constipator,” he may have been more insulted when the same company introduced “Lincoln Sexual Pills”! One advertisement stated that “Thousands of young and middle-aged men growing prematurely old because of the practice of vices or excesses have been restored to perfect strength and glorious manhood…and if you use LINCOLN SEXUAL PILLS you will surprise yourself and your friends by becoming a strong, manly man.!” Another ad declared that the pills “…give the proper functional actions to all the vital organs. Be the kind of man you ought to be – yes, be a man!”
Posted by Jim Schmidt at 6:36 PM