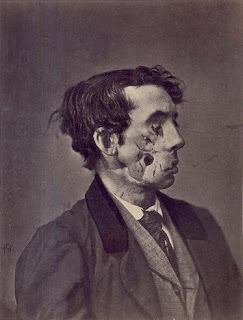 Here is another "oldie-but-goodie" from my archive of Civil War News "Medical Department" columns. Enjoy!

"FACES"
by James M. Schmidt
The Civil War News
“Medical Department” – May 2001
In Josephine Tey’s classic novel, The Daughter of Time, detective Alan Grant solicited his visitors for opinions on the portrait of King Richard III that rested by his hospital bed. One thought it the face of a saint, another a judge. Of all the opinions, Grant felt that the hospital matron came nearest the truth: a face "full of the most dreadful suffering."

Blair Rogers, M.D., gives a rare glimpse into the faces and suffering of the Civil War’s wounded soldiers in his recent article, "Reed B. Bontecou, M.D. - His Role in Civil War Surgery and Medical Photography" (Aesthetic Plastic Surgery, 2000, Vol. 24, pp. 114-129).

In the article, Dr. Rogers (once managing editor of the journal and now deceased), describes the career of Bontecou, a New York surgeon who contributed greatly to the use of photography to document Civil War casualties. The most interesting, and emotive, part of the article is the inclusion of more than forty photographs of wounded soldiers taken by Bontecou and his staff.

Reed Bontecou was born April 22, 1824, in Troy, New York. During his schooling, he demonstrated an exceptional aptitude for the natural sciences. His work was so expertly done that he was often entrusted with the teaching of botany and zoology, even though a student himself.

In 1842, Bontecou began the study of medicine under the tutelage of several prominent Troy physicians and surgeons, and from 1844 to 1845, he attended lectures at the Medical Department of the University of the City of New York. He finished his studies in Vermont at Castleton Medical College, receiving his M.D. in 1847.

When the Civil War broke out, Bontecou was commissioned a surgeon with one of the Union infantry regiments supplied by the Troy area, and performed his first field operations after the Battle of Big Bethel in June 1861. He was present at the famous battle between the Monitor and the Virginia, the capture of Yorktown, and was placed in charge of hospitals at Fortress Monroe, Virginia, and Beaufort, South Carolina.

In late 1863, Bontecou was ordered to Washington, DC, to take charge of the Harewood General Hospital, and was on duty there until it was disbanded in 1866. It was during his tenure at Harewood that he made his most important contribution: he is credited with being the largest contributor to the Army Medical Museum. The thousands of specimens and hundreds of photographs that Bontecou contributed became a major foundation of the museum, which subsequently developed into the National Museum of Health and Medicine (NMHM), in Washington, DC.

Bontecou’s photographs, however, had a more immediate impact than the museum’s mission. Dr. Rogers credits him with being the first to apply photography for clinical purposes, showing the condition of the wounded when the soldiers were first admitted to the hospital, and many times when they were discharged. Indeed, the photographs were invaluable in qualifying disabled veterans for pension payments. 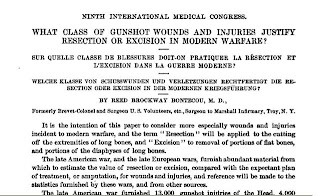 Forty of the photographs taken under Bontecou’s direction are reproduced in the article; four per page over ten pages. Each is identified with the name of the subject, their state, and the nature of the wound. The photographs are divided almost equally among injuries to the head and face, the arms, the abdomen, and the hip or legs.

Dr. Rogers offers little comment on the individual photographs, even though they make up the bulk of the article. Instead, he invites the reader to study them carefully and reflect on the emotions they elicit. What is most immediate is a sense of the personal tragedy facing these men: going home blind, crippled, or deformed.

The article is actually the third in a series describing the earliest results of mid-19th century reconstructive surgery performed by pioneering surgeons, especially on wounded Civil War soldiers. The first was "The First Pre- and Post-Operative Photographs of Plastic and Reconstructive Surgery: Contributions of Gurdon Buck (1807-1877)" (Aesthetic Plastic Surgery, 1991, Vol. 15, pp. 19-33). In it he describes the contributions of Buck, a New York City surgeon, and a pioneer in reconstructive surgery. The article includes more than thirty "before and after" photographs showing the results of these early attempts to improve the appearance of patients with severe injuries or birth defects. A few of the photographs are of wounded soldiers.

The second article, "The First Civil War Photographs of Soldiers with Facial Wounds" (Aesthetic Plastic Surgery, 1995, Vol. 19, pp. 269-283), includes photographs of nearly forty wounded soldiers, all with scalp or facial injuries, many of which had not been published since the Civil War. All three articles are superbly documented, offering opportunities for further research and study.

What did you see the last time you studied a photograph of a Civil War soldier (or citizen)? Bravery? Fear? Or just a face "full of the most dreadful suffering?"
Posted by Jim Schmidt at 4:51 PM

This is Donald from the "Touch the Elbow" blog. Can you email me at betardo@verizon.net. I have something to run by you. I tried emailing you, but I think I typed the wrong address.

Donald - Thanks for stopping by! I sent you an e-mail. Look forward to hearing from you!