The newest installment of my "Medical Department" column in The Civil War News has a definite holiday twist! It's about a toy that was very popular in 1865 and - as -it turns out - also very dangerous! Enjoy!

“The chemical toy which is now sold largely in many shops in this city, at prices ranging from threepence to one shilling each, is composed of a highly dangerous and poisonous substance… The material is a doubleheaded poisoned arrow, for it contains two poisonous ingredients…either of which will kill.” – Pharmaceutical Society of Great Britain, 1865 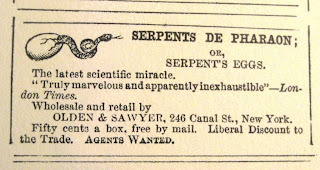 With the holiday season just around the corner, I recently pulled a favorite old book off the shelf: Philip Van Doren Stern’s The Civil War Christmas Album (New York: Hawthorn, 1961). Among the illustrations are two pages of period ads for holiday gifts; some are for soldiers, including an “army watch,” “Union playing cards,” and personalized badges. There are also advertisements for children, including musical boxes and one that really caught my eye: “Pharaoh’s Serpents.”

The ad intrigued me in no small part because I’m a chemist by day, and I wondered if they might be an ancestor, so to speak, of the “black snake” fireworks (that anyone can buy today) which – upon lighting – expel a snake-like ash. They are, indeed; but they are a very dangerous ancestor! The “Pharaoh’s Serpents” were very popular during the 1865 Christmas season in America, having appeared in Paris earlier that year. Unfortunately, the 1860’s version of “black snakes” was composed of a very dangerous substance – mercuric thiocyanate – and by January 1866, newspapers carried reports of poisonings and even deaths!

That mercuric thiocyanate produced the fascinating expanding effect had been known for decades. In 1821, as a young medical student, the famous chemist Friedrich Wohler wrote that upon heating, the chemical could be seen “winding out from itself…worm-like…to many times its former bulk.” It became a staple of laboratory demonstrations, and in mid-1865, Scientific American magazine reported that “a very ingenious Frenchman has adopted the plan of putting little cones of the substance into boxes, and selling them for a franc apiece.” They soon became popular throughout Europe and – not surprisingly - appeared in America in time for the Christmas season in 1865.

As early as November 1865, however, scientists were warning the public of the possible dangers of the popular toy. The Lancet - the leading medical journal in Great Britain – described the chemical components of the toy, and declared:

“It is very necessary that persons with delicate lungs, or suffering from any disease of those organs, should be most careful not to inhale the products of the combustion of the “serpents' eggs”; and in all cases great care should be taken that the room in which these toys are burned be freely ventilated. So satisfied are the authorities in Prussia of their deleterious properties, that the Government has forbidden their sale except by persons who are specially authorized to sell poisons.”

At about the same time, English poet Charles Tennyson Turner - brother to the British poet laureate, Alfred, Lord Tennyson – teased his niece, Agnes, upon receipt of one of the toys, also hinting at their danger:

“I return you in a manner good for evil, viz., two respectable sonnets…in return for a poisonous serpent, for this Pharaoh's Serpent has got into the newspapers… and is represented as very dangerous for children and even adults. It is composed of the most deleterious material, and, moreover, looks like a sweetmeat, and whether burnt or inadvertently eaten by a hapless bairn, will work its woe. We have not tried it yet, partly because we thought a tiny or two of our village might like to see it. But we shall give it, knowing its awful character, in private and with precautions. What do you mean, you apparently harmless female hobble-de-hoy, by sending down to our unsophisticated village this fragment of ancient Egypt! Your horned poppy and shingle-grown nightshade are better.”

A humorous incident, reported in newspapers across the country in spring 1866, occurred when a fidgety boy in Quincy, Illinois, played with the toy in an unlikely place:

“A young man named Spencer went to church…with some matches and some ‘eggs of Pharaoh’s serpents’ in his pocket. The sermon was long and the young man became uneasy; the matches were lighted by the friction caused by his movements, the eggs hatched, and the serpents made their way out of his pocket, wriggling and squirming with a great and disagreeable smell of burning chemicals. The congregation were greatly scandalized, and the clergyman considered the illustration of his denunciations of the wicked a very feeble one.”

But all was not fun-and-games. Other papers carried a report on a terrible incident in which three men were killed in London, “while engaged in the manufacture of so-called ‘Pharaoh’s serpents,’ the composition having exploded.” At about the same time, The Boston Medical and Surgical Journal published descriptions of two case studies; in one, a woman presented herself with “eruptions” on her face and body, which the examining surgeon attributed to the gases from the “Pharaoh’s serpents” with which she had been playing.

In the other case, a woman arrived at Massachusetts General Hospital with similar skin eruptions. The journal reported that her son, “had broken up several of these ‘eggs’ in his pocket and had handled the fragments freely. She had mended his pockets the night before the eruption showed itself, and had removed the debris with her fingers without washing her hands before going to bed.” The doctor further declared that “violent inflammation of the lungs had ensued in one case after inhalation of the vapor arising from the combustion of these little toys, and that in Europe several cases of poisoning had occurred from eating them by mistake for bonbons.”

Like many “must have” gifts, the fascination with “Pharaoh’s serpents” began to wane by the next holiday season, due in no small part to reports of the dangers in playing with them. Other toys – many of them chemical tricks – were popular by Christmas in 1866, including “magic photographs,” “rainbow bubbles,” “Japanese fireworks,” and “crocodiles’ tears,” which consisted of potassium in a soluble casing that blazed when thrown into water.

Today’s “black snakes” are made of safer materials and continue to entertain (in fact, people began to suggest safer alternatives in 1866). Still, the 1865 toy left an interesting social, scientific, and medical legacy.
Posted by Jim Schmidt at 8:41 AM

Terrific Post Jim. Very entertaining and informative. Great source material too. Makes me want to find one of those modern versions and try it out !

I used to buy pharaoh's serpents in the UK in the late 1970's from joke shops. There were 3 circular based cones about 6mm high in each packet, which cost 10p. I remember the word "poison" at the bottom of the packet in red ink (the rest of the pack had black ink). They were banned not long afterwards due to their toxicity.

I eventually found out ways to make "magic snakes" and made my own out of potassium dichromate, potassium nitrate and sugar, before finding out that pharaohs serpents were mercuric thiocyanate. It wasn't easy for me to find this out long before the days of the internet!

I ended up (very carefully) making about 1kg of mercuric thiocyanate using mercury metal, nitric acid and ammonium/potassium thiocyanate but then my mum threw it away one day when she had enough of my chemicals. I was gutted...