This month’s column is based on an interesting postwar (1866) letter I recently added to my collection. Though the letter itself is short, further research has revealed some wonderful elements of an interesting story: the letter writer was a native of New England (and an Ivy Leaguer!) who moved south before the war, joined a Confederate regiment, served as a nurse and hospital steward, jumpstarted a medical career in war-ravaged Georgia, and is part of a quite interesting family.

But first, the letter: 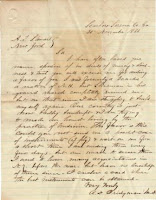 I have often heard your name spoken of in deeds of mercy & kindness & trust you will excuse me for asking a favor of you. I was formerly a teacher, a native of N.H., but Sherman in his grand march completely ruined me. But on that ruin I am struggling to build myself again. Our country is just now badly bankrupt & I am trying to make an honest living by the practice of medicine. The favor is this: Could you not send me a pocket case of instruments (3-ply) & wait on me for a short time. I am needing them every few days but am unable to secure them. I used to have many acquaintances in N.Y. before the war but have no knowledge of them since. I enclose a card where the best instruments can be obtained.

So…Who is A.T. Stewart? Who is A.D. Bridgman? And is there anything else interesting here? (The answer to that question is a definitive “Yes”!). Clues in the letter (beginning with connections to Screven County, Georgia, and New Hampshire) led me to identify “A.D. Bridgman” – our main “character” – as Addison Daniel Bridgman, after consulting college directories, period newspapers, census information, published family histories, and (most interesting!) Confederate service records.

As for “A.T. Stewart,” he is almost certainly the famous businessman Alexander Turney Stewart. Stewart was born in Ireland in 1803 and effectively orphaned when his father died shortly after his birth and his mother remarried and sailed to America. He was then raised by his grandfather, who in turn passed away when Stewart was a teenager. By then he had begun a correspondence with his mother and soon wanted to travel to America himself. He gained some business experience working with a grocer and - with his savings – left Belfast for New York City in 1818.

Stewart was a natural salesman and opened his first retail store, specializing in Irish and domestic fabrics, in 1823. He built the small store into a thriving business and by 1848 had completed his “marble palace” on Broadway as well as a tremendously successful mail order business. By the time of the Civil War, Stewart was one of the wealthiest men in America. No doubt Bridgman felt comfortable in asking Stewart for the favor as the retailer had gained a reputation for charity, trust, and lenient credit terms; indeed, he would often send products to his mail order customers (postage paid!) before they had paid for the goods themselves.

A.D. Bridgman was indeed a “native of N.H.,” as he wrote, having been born in 1832 in Hanover, New Hampshire, to Daniel and Harmony Bridgman. Daniel was deacon of the Baptist church of Hanover for many years and held most of the town offices, served in the state legislature, and was a successful businessman. A published family history, Genealogy of the Bridgman Family (1894), indicated that the Bridgman patriarch was “worthy and esteemed by all.” The family was large: Addison was the fourth of nine children (three boys and six girls), although tragedy would strike them.

A.D. Bridgman was also – as he wrote in his letter - “formerly a teacher.” He attended Thetford Academy in Vermont, Kimball Union Academy in Meriden, N.H., and Dartmouth College (1852-54), and then attended a year’s course of lectures in Dartmouth’s Medical Department. For reasons unknown, he settled in Georgia in 1856, teaching in schools in Macon and Hawkinsville, before opening his own school in Screven County.

In the 1860 census, Bridgman is listed as a “teacher” in Screven County, but his birthplace is listed as North Carolina! F. Terry Hambrecht, M.D., an esteemed medical historian (who kindly provided me with the census information), wonders if Bridgman (falsely) represented himself as being from a southern state so that local citizens wouldn’t suspect him of having abolitionist sympathies. It’s interesting to consider!

In 1866, Bridgman (who married late in 1860) was still in Georgia, where he hoped to open a medical practice; thus the letter to A. T. Stewart asking for a favor. But what of the intervening years of the Civil War, 1861-1865? That’s the interesting part! In his letter to A.T. Stewart, Bridgman left out a very important piece of information; he simply stated that “Sherman in his grand march completely ruined me.” What he failed to mention is that while Sherman was “marching through Georgia,” Bridgman was fighting with the 25th Georgia Infantry!

The 25th Georgia Infantry Regiment was organized at Savannah, Georgia, in September, 1861. The unit served on the coast until the summer of 1863 when it was ordered to Mississippi. It fought with the Army of Tennessee from Chickamauga to Atlanta and saw action at Bentonville. The unit was greatly reduced in numbers by the time it surrendered on April 26, 1865.

Whether or not Bridgman himself was shooting at men from the Granite State or other New Englanders is hard to say. While the 25th saw significant action in the latter part of the war, Bridgman’s compiled service record indicates that he spent most of the war on detached service.

In early 1862, he was reported as on “sick leave” back home in Screven County. Later that year he was detailed to work on a “floating battery” and “gun boat” at Savannah. In November 1863, he appeared on the roll of the Ocmulgee Hospital in Macon, Georgia, with the complaint of “anasarca” or “dropsy,” a general swelling of the body due to fluid buildup in tissues. For most of 1863 – and to the end of the war – Bridgman was a nurse and then “acting hospital steward” at City Hall hospital in Macon and then Lee hospital in Columbus, perhaps taking advantage of his year’s worth of formal medical education.

When the war was over, Bridgman returned to New Hampshire, took another year’s medical courses at Dartmouth, received his M.D., and returned to Screven County to practice medicine, teach, and serve as postmaster. Bridgman and his wife, Salome, moved to Decatur, Illinois in 1874, where he resumed his medical practice, before passing away in 1916. 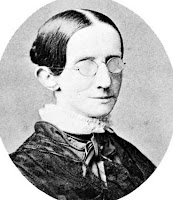 Addison Bridgman also had a very well-known older sister: Laura Bridgman. Born in 1829, Laura is famous for being a deaf-blind child who received instruction a full fifty years before Helen Keller. The Bridgman family was struck with scarlet fever in 1832, losing Laura and Addison’s two older sisters to the disease. Laura was left deaf, blind, and with no sense of smell or taste.

Through the kindness and expert care of people like Dr. Samuel Gridley Howe and other tutors, Laura learned to write, do arithmetic. She even attracted the attention of Charles Dickens, who wrote of Laura and Howe in his American Notes. It was Dickens’ account of Laura Bridgman that prompted Helen Keller’s mother to seek treatment for her daughter several decades later. Laura Bridgman was very fond of her younger brother, Addison, and he is mentioned often in her journals.

Just goes to show the rest of us that something seemingly plain and ordinary is worth researching. I suspect to most people the "value" of the letter would be the Sherman reference. Very interesting find and great research!

Robert - Thanks for the comment! I'll be honest: for me, the Sherman reference was indeed the attraction in the first place. But I guess I wasn't satisfied with stopping there and each step further was a surprise! Jim

This is a very interesting post. I'm wondering how you accomplished such deep research in such a short amount of time. Were you drawing on resources you had or knew about ? I'm jealous.

Letter from Addison Bridgman to Dr. G. Stanley Hall, who, in 1878, was conducting a psychological study of Laura Bridgman:

I now recollect two little incidents of our childhood which as they may interest you I will relate.

In those days we had a large old fashioned fire place (as stoves were scarcely known) and on occasion as Mother’s servant woman and Laura were making a ball I was displeased about it in some way and broke the yarn which they were unraveling from an old sock and before I could retreat, L. caught me and throwed me head foremost into the fire which burned my clothes off & came morn proving more serious burn. We also had an old black cat & whenever L could get hand on it she would fling it in the fireplace as she always disliked cats.