In the column below, he talks about Civil War medicine, the museum's mission, and how they are reaching out beyond the bricks-and-mortar. Enjoy!
UNFINISHED WORK
By James M. Schmidt
The Civil War News – “Medical Department” – May 2010
“A finished museum is a dead museum, and a dead museum is a useless museum.” – G. Brown Goode, The Principles of Museum Administration (1895)
Although written more than a century ago, George Brown Goode’s volume on the purpose and management of museums resonates even today. He had specific advice on the relationships of museums and their communities and the responsibilities they had to each other. “For a museum to be useful and reputable,” he wrote, “it must be constantly engaged in aggressive work, either in education, investigation, or both.” Today, Goode finds a kindred spirit in Mr. George Wunderlich. 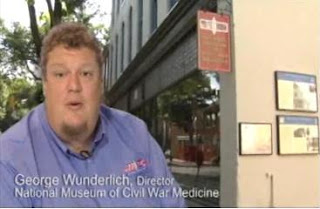 Mr. Wunderlich is currently the Executive Director of the National Museum of Civil War Medicine (NMCWM) in Frederick, MD. He came to the Museum in 2000 after moving from Missouri where he was Founder and Director of the Historical Education Center of St. Louis. In 1995, Mr. Wunderlich was awarded the Daughters of the American Revolution National Medal of Honor for his work in public history.
After receiving his Master of Arts Degree in American History from Concordia University, he went on to develop new historically-based training programs for the National Park Service, Joint Medical Executive Skills Institute Capstone Symposium, The United States Army Medical Regiment, and other civilian and government organizations. He is a nationally known speaker on various Civil War topics and can be regularly seen on the History Channel, A&E, PBS and the BBC. He was kind enough to answer my questions about Goode’s admonition that museums must be “constantly engaged,” especially with the NMCWM’s new initiative: the Letterman Institute.
In 1974 my father bought me a Hawkin rifle and taught me to shoot. From that day forward I was addicted to history,” Mr. Wunderlich told me, adding, “In 1975, I became the youngest member of the St. Louis Civil War Roundtable and my addiction deepened. Month after month I went with my father to hear speakers like Bud Robertson and James McPherson and my understanding of history grew.” He has also been very active in living history, first as a mountain man (beardless as you can imagine!) shooting in live fire competition and then as a member of Battery I, 1st Missouri Light Artillery.
Mr. Wunderlich’s interest in medical history can be traced back to 1990 when he researched the subject to perform “Ranger in the Park” programs for the St. Louis County Parks Department at Jefferson Barracks. “I was enthralled with the myth vs. reality facet of this often maligned subject,” he told me. In 1998, he was playing one of his handcrafted banjos at the NMCWM when he was asked a medical question. “To the shock of the director I knew the answer and was able to discuss the matter at length with one of the museum’s board members,” he told me. Because of that conversation, he was asked to work for the museum when a position became available in 2000, and, as he said, “the rest is history.” 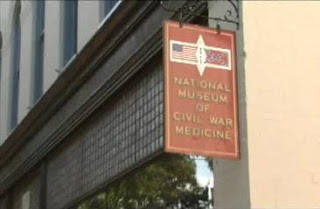 As Executive Director of the NMCWM, Mr. Wunderlich is passionate about communicating the true story of Civil War medicine to the public and correcting long-standing myths and misconceptions. When he saw headlines and reports after the recent devastating earthquake in Haiti such as “Much has been made of how natural disasters temporarily plunge medicine back into the era of the Civil War” (Washington Post) or “It is just reported that doctors in Haiti do not have anesthetics and must amputate limbs without pain relief…exactly as practiced in the Civil War” (CNN iReport), Mr. Wunderlich felt compelled to write an editorial to the Frederick News Post correcting those mistaken impressions.
“I feel very strongly that ignorance of the past prevents, or at least hinders, future innovation,” Mr. Wunderlich told me. “You must have a good working knowledge of that which has come before otherwise you are prone to reinvent or make the same mistakes as your predecessors. Either way you are not succeeding in your mission.” To be sure, the bricks-and-mortar NMCWM helps combat that ignorance, but the Museum is doing much more than that, satisfying other Goode “commandments”: a museum must “advance learning” and be an “adjunct to the classroom.”
“We are taking several different steps to help correct these impressions in the media and the public,” Mr. Wunderlich told me. They include partnerships (National Park Service and television networks), publications (the NMCWM press has already published four books), social media (Twitter, Facebook, blogs, etc.) to publicize programs, and conferences. Another of their outreach programs is the Letterman Institute, named for Dr. Jonathan Letterman, Medical Director of the Union Army of the Potomac during the Civil War and often considered the “father of battlefield medicine.”
“The Letterman Institute is a professional level training organization within the Museum tasked with using the lessons of Civil War medicine and applying them to modern best practices,” Mr. Wunderlich told me. “The Institute looks at all facets of medicine, including treatment, logistics, communications, public health, law of armed conflict issues, humanitarian practices, management, command and control, relations between field and medical command and medical policy making,” he added. The Institute tailors programs to the needs of specific organizations, ranging from high level military medical officers, civilian medical professionals, all levels, and even business and non-profit leaders. “The lessons of Civil War medicine not only apply to the medical field but to all aspects of good management and communication,” Mr. Wunderlich told me. 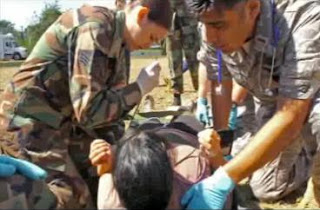 Indeed, those lessons – as communicated through the Museum’s outreach efforts - are having an impact on battlefield even today. In one training session, Mr. Wunderlich was relating how Letterman used the orders of General George McClellan to anticipate medical needs on the field, which allowed Letterman to be proactive in dispatching medical assets rather than reactive. A doctor in the audience realized that a recent change in a communications center in Iraq had undone what Letterman had learned.

“A recent order caused removal of medical planners and dispatchers from a key communication center due to overcrowding,” Mr. Wunderlich told me. The officer realized that the move had caused increased fatalities among the wounded. “As a result, he called his colleagues in Iraq to move the medical dispatchers back into the communications center so that there would be no delay in dispatching medical help,” he added. They learned later that fatality rates returned to their pre-move rate after the corrective action.
As another example, Mr. Wunderlich recently trained a group of professionals in federal medical service. “One Air Force Colonel told me that by using the Letterman Plan of 1864 and digesting its lessons of pre-planning, efficient use of limited transportation assets, and a whole-team approach to health care, he was able to earn an award for reducing air-frame maintenance and fuel costs,” he told me. The officer did this by using all of the assets in his control to pre-plan evacuation flights so that there could be a doctor on each aircraft bound for Germany. “The presence of that doctor allowed the flights to adhere to regulation and maintain a 30,000+ foot ceiling where fuel and wear are reduced,” Mr. Wunderlich told me, adding, “Before he took over, many flights did not have doctors on board and were limited to a 10,000 foot ceiling which required refueling in Turkey and increased flight time requiring more maintenance.” The lesson? Civil War medicine can even help aircraft!
“A museum which is not aggressive in policy and constantly improving, cannot retain in its service a competent staff and will surely fall into decay,” Goode wrote in 1895. Mr. Wunderlich, the founders and their hardworking and dedicated team are making sure that doesn’t happen to the National Museum of Civil War Medicine.
Posted by Jim Schmidt at 10:23 AM

Thanks for the great interview with Mr. Wunderlich! I am going to get to visit the museum this summer and was already excited, but I was fascinated to learn of the contemporary outreach efforts. So often these consist of a few press releases ... the outreach to current practioners in Iraq is really impressive!