Stamps (and Civil War Medicine!): I Feel Like a Kid Again! When I was a kid, I spent time outside as much as any other playing baseball, doing Cub Scout activities, and generally running around getting dirty. My real passion, though, was an "inside" activity: stamp collecting.
I can't remember exactly when I started, but I think it was around the age of 7...I can't remember exactly why I started, either, except that my uncle/godfather was also an avid stamp collector and he may have inspired me.
I still remember my first "real" stamp album. We lived in Joplin, MO, when I was a kid, but in 1974, in the middle of 4th grade, we moved to Hosuton, TX. As a going way present, my classmates chipped in and got me a "Traveler" album...it was awesome. Now I had a place to keep and catalog "all" the stamps I had begun to accumulate! 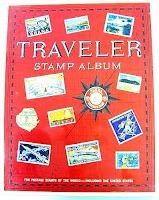 I use the word "accumulate" pretty loosely, as it took time for that collection to grow. Most of them came through birthday or holiday gifts from my parents or other relatives and others through duplicates my uncle had in his collection. We had (and still have!) relatives who were missionaries in far flung places on the globe and letters from them with stamps from Papua New Guinea or Nicarauga were a special treat. The most fun was in making careful decisions of using a small allowance to pick through the "stamps on approval" I received each month from the likes of the Jamestown Stamp Company, Littleton Stamp Company, and other vendors.

I continued collecting through my early teens. I think my first merit badge as a Boy Scout was the "Stamp Collecting" merit badge. I also began to specialize in collectying stamps related to space exploration, Christmas, and Scouting. For whatever reason, as I became older, other activities took over. But that collection was still safely stored in a box until it was sold when I was in my early twenties.
Now it's almost twenty-five years later (yes, I know I am dating myself) and I feel like a kid again. Why? Because I have found a way to combine my current "inside" passions: the Civil War and 19th-century medicine with stamps!
It turns out that during the Civil War, Congress enacted a revenue act in 1862 to help pay the cost of the war that required some industries - matches, patent medicines, perfumes, playing cards and, for a short time, canned fruit - to pay a tax, via a stamp on their product. The companies could use the standard government-issue internal revenue stamp or - at their own expense - have a die made to make their own stamps (upon approval of the design) which were then engarved bya government contractor.
Though they at first protested (they were met with the rebuke "We Must Have Money"!) many proprietary medicine (aka patent medicine, quack medicine, snake oil, etc.) vendors took advantage of this opportunity because they saw it as free advertising. The tax lasted until 1883 (before being revived for the Spanish-American War) and hundreds of stamps in a variety of colors, denominations, and handsome engravings.
So...I've started to collect the stamps - known to collectors as "Match and Medicine" stamps (but slowly!). Here are images of the first few I have added (note they are enlarged substantially): 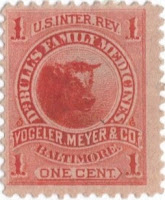 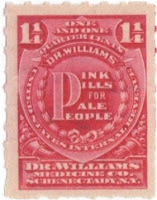 There are some great websites out there to describe the Revenue Act of 1862 and the stamps, but these are some of the best:
Gary Giroux - Professor of Governmental Accounting - Texas A&M University
Robert Hohertz - AMAZING website with thumbnail pages of the M&M stamps and patent medicine company biographical sketches
Posted by Jim Schmidt at 12:48 PM

Jim, thanks for the blog link and a very informative article...and thanks for the reference for getting you started and interest in the study of stamps and stamp collecting in general.

I too put them aside about 20 years ago and in the last couple of years started once again looking at the books and realized how far I had gotten behind and the number of stamps that had been issued these past years. It will take a major investment just to get the updated printed sheets to mount the stamps...much less get all the missing stamps. I also find myself looking at the stamps from New Guinea when we get a card or letter from my cousin.

My grandson also has me get the books of stamps out every so often to look at my collection. Many years ago I finally settled on the collecting of mint US Commemrative stamps. Needed to focus my efforts a little.

Found the Civil War and Post-Civil War era article on these special issued stamps really intriguing and had never heard the story behind their issue. Keep up the good work on your study, research and writings.

I share the same thoughts and experiences- this topic is quite interesting to me having gone thru half the collecting related fun & experiences. History plus physical pieces of it fascinate me and send me to another era.
Hoping you continue with these blogs, I’m in!
��