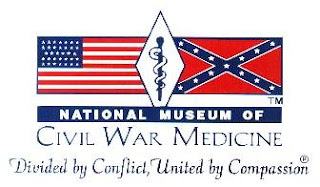 I attended the meeting last year and had a TERRIFIC time (read my trip report here)! Check out the GREAT speaking lineup below...the Saturday Tour sounds wonderful also! Hope to see you there!

(Shameless Self-Promotion: Check out who is speaking on Sunday!)


For a conference brochure and registration details contact Karen Thomassen at 301-695-1864 or e-mail Museum at civilwarmed dot org.

Join Mr. Wunderlich as he discusses his latest adventure with the National Geographic Channel, where he performed ballistic tests in an effort to discover what sank the Hunley. A reproduction of the submarine’s coning tower will be available for viewing.

Interest in artificial limbs in the United States began to grow in the years before the Civil War as industrial, farming, and railroad accidents became more common. Large manufacturers, based almost exclusively in the North, developed elegant articulated devices made primarily of wood and outfitted with ingenious systems of hinges, cords, and springs. The large and growing pool of amputees created by the war intensified competition among Northern firms and prompted the establishment of a small number of limb companies in the South.

While Dr. Stonestreet’s Civil War service of about one year was a relatively small part of his nearly 52-year medical career, he had historic connections to significant Civil War medical persons and events. Mr. Hickey will discuss the life and career of Dr. Stonestreet in context of the nineteenth century world in which he lived, including his pre-war medical education, his service as an examining surgeon and as an acting assistant, resulting in a portrait of a remarkable man who cared for, and took care of, his community.

Dr. Baruch spent a considerable part of his early career as a Confederate Army Surgeon, participating in many of the major eastern battles with experiences in field and general hospitals. Dr. Willen will summarize Baruch’s career as a surgeon, as well as his post-war years as a pioneering American physician in the development of surgery for appendicitis and free public baths in New York City.

The two useful anesthetic agents in the 1860s were ether and chloroform. The characteristics of each agent and their anesthetic potency will be discussed. Chloroform is quick to sleep and to awaken. Ether is much slower. Air and ether is a very combustible mixture, while chloroform is not combustible. Dr. Gibbs will relate his personal experiences administering both agents which parallel battlefield anesthesia during the Civil War. A short film clip will actually demonstrate Civil War levels of anesthesia.

Military commanders have long appreciated the importance of terrain to the success of their campaigns and battles. Yet only recently has the connection between geological conditions and the surface topographic features been recognized. For the past ten years Dr. Whisonant and Judy Ehlen, Ph.D., have studied the linkages among geology, terrain, and casualties on American Civil War battlefields. Dr. Whisonant’s presentation will guide you through the battle on the ground and show how lethal certain geologic topographic conditions were to both armies.

In 1814 Army Surgeon General James Tilton first required that regimental surgeons record daily weather observations. This chore, reinforced by his successors, is a little known part of military medical history. The scientific logic behind this curious effort illustrates shifting medical assumptions about relationships between atmospheres, climates, diseases and cures. Artistotle, Lawson, Solly, Hippocrates, Meigs, Lovell, Finely, Snow, Scoresby-Jackson and even Myer are all encountered in this explanation of the Medical Department’s century long interest in weather.

When the Civil War began, the Baltimore and Ohio Railroad quickly became the most important railroad in the nation. Located in a no-man’s land between North and South, it was continuously under assault. Using ingenious techniques, the B&O repaired the damage and adapted to war. It was used to clear battlefields of the wounded and prisoners, participated in large scale troop movements, and developed specialized equipment such as bullet proof box cars for carrying ammunition.

Perfectly set-up by Mr. Toomey’s presentation of The War Came by Train, conference attendees will participate in a bus tour to the Baltimore & Ohio Railroad Museum. This universally recognized birthplace of American railroading represents the vision, establishment, development and creation of the first common carrier railroad in the Western Hemisphere. Established in March 1829, the Mt. Clare Shops are the oldest continually operating railroad shops in the world. An extensive list of historical and technological firsts was accomplished there. From the perfection of the flanged wheel, and the building and operation of the first American built steam locomotive to the construction of the world’s first conditioned passenger car, Mt. Clare was a laboratory of American ingenuity. The oldest, most comprehensive American railroad collection in the world, the B&O’s architecturally and historically significant railroad buildings and structures are preserved and interpreted as part of its collection. Visit borail.org for more information.

The fact that microbes caused more death than hostile fire is well known to the student of the American Civil War. However, the role of insects in the transmission of these disease-causing organisms has been greatly overlooked. Maladies such as dysentery and malaria have an important or critical insect component and accounted for tremendous suffering during the war. Surrounded by insects such as flies, lice, and fleas, both armies found themselves battling more than each other. By interconnecting history and natural history, this lecture reveals the significant impact of insects on soldiering during the Civil War.

The story of African American medical personnel serving during the Civil War is an often neglected part of Civil War history and little has been written on the subject. Few personal accounts of black surgeons and nurses exist, and materials are often hidden among the thousands of Civil War records contained in repositories throughout the country including the National Archives and Records Administration. Ms. Newmark will present a journal of discovery that will introduce the life and work of African American Civil War Surgeon William P. Powell, Jr., by exploring existing historical records that reveal this once hidden part of history.

“The Soldier’s True Friend” Quack Medicines and the Civil War Soldier from the First Shot to the Last Veteran
James M. Schmidt

The use of patent, proprietary, or “quack” medicines began in colonial America, continued through the early 1800s, accelerated during the Civil War, and then declined after the 1930s. This lecture will cover several topics related to the important and interesting role patent medicines played in the American Civil War. Mr. Schmidt has a significant collection of Civil War patent medicine ephemera which he will also share with the attendees.
Posted by Jim Schmidt at 8:15 PM