“It is difficult for us to realize the fact, but we all know that any soldier is in five times more danger of dying from malarious disease than of being killed in battle. What malaria is nobody knows. It may consist of organisms…too minute for even the microscope to detect or it may be some condition of the atmosphere…or it may be a gas evolved in the decay of vegetable matter. There is no doubt, however, that malaria is some mysterious poison in the atmosphere, and that it is confined strictly to certain localities." - “Advice to Our Soldiers – Malaria and its Remedies” – Scientific American - July 20, 1861


If any disease deserves its own military history, it ought to be malaria. Indeed, a British medical officer went further, declaring in 1910 that “the history of malaria in war might almost be taken to be the history of war itself.” Malaria – and its cousin, yellow fever – had significant implications during the war and - as witnessed above in the early-war quote from Scientific American - the debilitating consequences of the disease were already certain before the Civil War had started in earnest and well before its final history had been written. Also evident in the quote is the mystery that still surrounded the cause and transmission of malaria.

In his recent book, Mosquito Soldiers: Malaria, Yellow Fever, and the Course of the American Civil War (Baton Rouge: LSU Press, 2010, $29.95), Andrew M. Bell, Ph.D., has both removed the mystery and significantly increased our understanding of these two diseases, which he declares “have [been] given short shrift” in most medical histories of the war (p. 6). While seemingly short at 120 pages, in fact Mosquito Soldiers covers much ground, indeed. The title comes from Bell’s apt conclusion that the insect served as a “mercenary force, a third army” (p. 4) during the war.

The first chapter describes the science behind the diseases, their transmission by the Anopheles and Aedes mosquitoes, and the sickness and death they caused in antebellum America. Chapters 2-6 offer a military history of the diseases over the course of the war, in which he draws on the Official Records and other sources to make a good case that the insects and disease (and fear of disease) affected campaign and battle strategies. A final chapter describes the role of “biological warfare,” through acts of sabotage and terrorism (though based on a misunderstanding of the cause of malaria and yellow fever) and the effect of the Union blockade on Confederate medical supplies, especially quinine.

The book is supported by interesting appendices, including one consisting of maps of malarial incidence among Union troops year-by-year as well as a map of yellow fever outbreaks. The bibliography demonstrates Dr. Bell’s use of an array of period newspapers, letters and diaries, and medical reports as well as relevant secondary sources, all supported by excellent explanatory endnotes. The writing is clear and engaging. I recommend it highly.

He was kind enough to tell me about his interest in history and provide additional insights into the important role that malaria and yellow fever played in the Civil War.

Dr. Bell attributes his early interest in history to peer pressure. “Everyone I knew as a child was obsessed with the Civil War,” he told me, adding, “My elementary school chums played ‘Yankees and Rebels’ instead of ‘Cowboys and Indians.’” Dr. Bell went to the New Market living history event every year with his father and his grandfather told him stories about seeing Confederate veterans march down Monument Avenue in Richmond. “Growing up, I just assumed that everyone shared this obsession; when I got to college, I learned that there were people in the world who didn’t know or care much about the American Civil War. What a shock!”

Dr. Bell was inspired to embark on the book project early in his doctoral studies at George Washington. “Dr. Elizabeth Fenn (author of Pox Americana) suggested that I write a book on malaria during the Civil War. I checked the literature and realized that she was on to something: the epidemiological historiography of the war is dangerously thin and historians have shied away from writing about disease even though they know that it killed most of the soldiers who died during the Civil War.”

A self-professed “glutton for punishment,” Dr. Bell tackled a very topic. “I had to spend several months in the GWU Medical Library learning about the etiology of malaria and yellow fever before I could consult any historical sources. When it came time to write the book, I tried to focus on stories about real people rather than the technical details,” he told me. Dr. Bell compares good historians to good butchers: “they both trim the fat and give their customers the choicest cuts.” 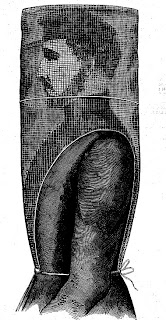 His focus on real people is evident when Dr. Bell describes the effects of disease outbreaks and fatalities among civilians; effects that might not have otherwise happened but for the belligerent forces marching through and camping near their communities. While he acknowledges that we will never know precisely how many civilians died as a result of these outbreaks, he does conclude that the people of the South paid a heavy price in addition to the loss of sons, fathers, and husbands on the battlefield. “They also had to endure a pestilential nightmare,” he told me. “Traveling armies fouled their neighborhoods and water supplies, which aided the spread of dangerous diseases.”

Dr. Bell also spends a good amount of time on quinine, “the most potent weapon Civil War surgeons had in their fight against malaria,” (p. 6). Derived from the bark of the South American cinchona tree, the alkaloid was an effective remedy for the fever and debilitating chills caused by malaria; in fact, it was used as a remedy until the 1940s before it was replaced by other drugs. The Union enjoyed a ready supply of quinine and regimental surgeons dispensed many tons of the drug over the course of the war.

Dr. Bell also explains that the South suffered from a quinine shortage for most of the war. The federal blockade limited the availability of quinine and other drugs and what little made it through the blockade or was smuggled through enemy lines was seized by Confederate quartermasters. Dr. Bell told me of a letter he found from a woman in Summerville, South Carolina who begged her relatives in Rhode Island to send her a few ounces of quinine. “She was especially concerned for the health of her children and insisted that life in Summerville ‘depended upon quinine.’ I don’t think that her case was extraordinary.”


Civil War enthusiasts who are interested in the naval aspects of the war will be especially pleased with Mosquito Soldiers. Dr. Bell declares that “Malaria [and yellow fever]...also sickened thousands of Union and Confederate sailors who patrolled the South’s inland waterways and coastal harbors during the war,” (p. 31). He describes how the diseases affected naval campaigns and life on specific vessels (the USS Delaware and the CSS Florida are only a few of several interesting cases). As a resident of Houston, I was especially interested in his lengthy discussions of outbreaks among soldiers and civilians on the Lone Star coast, especially in Galveston where an 1864 outbreak of “yellow jack” led to hundreds of deaths.

The misunderstanding – if not ignorance – of the cause of disease by Civil War surgeons has often been the source of derision in Civil War literature. At the very beginning of Mosquito Soldiers, Dr. Bell addresses the accusations of “presentism” and “cultural smugness” that historians may face when they apply a modern lens to studying medical problems of the past. “Historical context is a useful servant, but a cruel master,” he told me. While Dr. Bell acknowledges, “we should think about the past from the point of view of our predecessors,” he also believes that “unless we’re studying history simply for its own sake, we need to make comparisons between the past and present.”

Dr. Bell happily acknowledges that authors such as Dr. Jay Bollet (Civil War Medicine: Challenges and Triumphs) and Dr. Margaret Humphreys (Intensely Human) are “pushing Civil War the medical historiography in the right direction,” as he told me, adding “I’ve never been a post-modernist. I believe that immutable scientific laws—truths which transcend time and cultural traditions—exist within the field of medicine.”

We can be happy that Dr. Bell is in good company with Drs. Bollet and Humphreys – and others – and has added to that truth in explaining the important role of malaria and yellow fever in the Civil War in Mosquito Soldiers.
Posted by Jim Schmidt at 8:08 AM

Great interview and overview of the book. It sounds like one I'll want to watch for and try to add to my collection.