I have written before (here, here, and here) about how Civil War-era patent medicine manufacturers eagerly solicited and happily accepted testimonials from soldiers who used their medicines to their (supposed) great benefit. The manufacturers then published the testimonials in their advertisements, especially the "giant" enterprises of the day, such as "Holloway's Pills and Ointment," "Herrick's Pills," “Hostetter’s Celebrated Stomach Bitters,” “Brandreth’s Pills,” “Ayers Sarsaparilla,” “Radway’s Ready Relief,” and others.

However, for every Holloway, Hostetter, and Radway, of national - and even international - fame, there was one (nd probably more) almost-anonymous patent medicine inventor known for his "healing powers" and product(s) mostly in his own locale.

Below I share an actual, handwritten, soldier testimonial, in my collection.In this case, the patent medicine proprietor was Thomas B. Cox, Jr. The soldier who provided the testimonial was Maj. W. G. Williams of the 126th Ohio Volunteer Infantry.

According to A Biographical Record of Fairfield County, Ohio, Illustrated (S.J. Clarke, 1902):

THOMAS B. COX...Honored and respected by all, there is no man in Fairfield county who occupies a more enviable position in business circles than Thomas B. Cox, not alone on account of the brilliant success he has achieved but also on account of the honorable, straightforward business policies which he has ever followed. He possesses untiring energy, is quick of perception, forms his plans readily and is determined in their execution. It is true that he inherited much property, but in controling this and enlarging his business interests he has shown excellent judgment, industry and keen sagacity, and his career demonstrates the truth of the saying that success is not the result of genius but the outcome of a clear judgment and experience.

Mr. Cox is numbered among the native sons of Fairfield county, his birth having occurred in the village of Greencastle on the 4th of March, 1826. He comes of a Scotch-Irish ancestry, although the family has long been established in America. His father, Thomas B. Cox, was born in the vicinity of Gettysburg. Pennsylvania, in 1797, and in 1807 came with his father, James Cox, and the family to Fairfield county...

(More on the elder Mr. Cox in a future post!)
In the village schools of Greencastle Thomas B. Cox began his education, which he continued in a select school of Lancaster, prosecuting his studies for six years and thereby winning that broad mental culture and discipline which is the foundation of all business success. After leaving school he became superintendent of a grain business and also conducted a store in Greencastle. In 1857 he established a store in New Lexington, Perry county, and while there was elected a member of the city council, in which he served for six years, so that he was actively concerned with the government and control of that municipality.

In 1865 he removed to Lancaster to take charge of his father's affairs, and upon his father's death, in 1871, he was appointed administrator of the estate, which was valued at one hundred and seven thousand dollars. The farms comprise five hundred and fifty acres in Fairfield county and another farm of one hundred and sixty acres in Missouri, which is owned by our subject. He also owns twenty-five lots and a number of dwellings in Lancaster, which he rents. His own substantial brick residence was erected in 1879 and is one of the attractive homes of the county seat, being celebrated for its gracious hospitality.

Although the property and business interest of Mr. Cox demands much of his time, he has yet found opportunities to devote some time to literary matters and is a writer of interest and force, his publications in some of the principal journals throughout Ohio attracting widespread attention.

He is also interested in medical remedies and has compounded a medicine which he claims as an infallible cure for rheumatism. He is a man of scholarly attainments and broad general culture, reads, widely and is well versed on the topics of the day. He is courteous and affable in manner, always approachable, and those who know him personally have for him a warm regard.

The letter below from Williams is typical of a soldier testimonial: unflattering words for army physicians, dubious credentials for the proprietor (Cox was *not* a doctor), and a recommendation that the army use the medicine to save more lives.

The letter is actually one of a collection of several handwritten testimonials from other soldiers, all with acclaim for Cox's medicine, which I hope to publish in some form in the future. Given the biography above, I expect that Cox simply sold the medicine in his store as I have not been able to find advertisements in period newspapers. 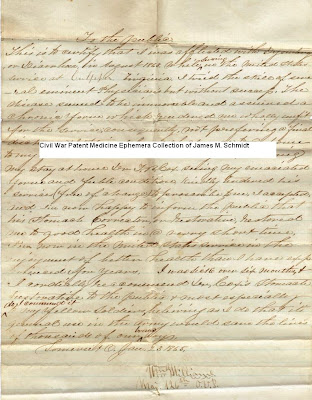 This is to certify that I was afflicted with Dysentery, or Diharrhea, in August 1863, while serving in the United States Service at Culpepper, Virginia. I tried the skills of several eminent physicians but without success. The disease seemed to be immovable and assumed a chronic form which rendered me wholly unfit for the service. Consequently, not prefrring a final discharge, I obtained leave of absence to go home to my friends in Ohio in February 1864. During my stay at home, Dr. T. B. Cox, seeing my emaciated form and feeble condition, kindly tendered his service (free of charge) to prescribe to me. I accepted, and I'm now happy to inform the public that his Stomach Corrector, or Restorative, restored me to good health, in a very short time. I'm now in the United States service in the enjoyment of better health than I have experienced for years. I was sick over six months and I cordially recommend Dr. Cox's Stomach Restorative to the public and most especially do I commend it to my fellow soldiers, believing as I do that it's general use in the army would save the lives of thousands of our brave boys.

Nothing like a good testimonial to carry the day.