Here's an oldie-but-goodie...one of my earliest medical columns for The Civil War News...but it's on a topic that's always timely and myth-busting: anesthesia in the Civil War. Enjoy!

“An Infinite Blessing”
"Medical Department"
The Civil War News April 2001
by James M. Schmidt
In an earlier column, I alerted readers to an upcoming issue of the journal, Pharmacy in History, dedicated to Civil War pharmacy. I am pleased to inform you that the issue has been published (Volume 42, No. 3 and 4, 2000), and is available now at a nominal price from the American Institute of the History of Pharmacy (AIHP, website here).

The AIHP is a non-profit national organization devoted to advancing knowledge and understanding of the place of pharmacy in history. (At this writing, Dr. Gregory Higby, executive director of the AIHP, and editor of Pharmacy in History, assured me that they had extra copies printed to meet the expected needs of Civil War medicine enthusiasts. Please feel free to contact the AIHP to make arrangements to purchase a copy of the journal.)

The special issue contains three very good articles. The first is “Pharmacy in the American Civil War” (pp. 67-86), by Guy Hasegawa, Pharm.D. a reprint of his outstanding American Journal of Health Systems Pharmacy article that I reviewed in the December 2000 column (here).

The second is “The Life of a Hospital Steward: The Civil War Journal of Spencer Bonsall” (pp. 87-98), by Michael A. Flannery, Associate Director for Historical Collections, Lister Hill Library of the Health Sciences, University of Alabama at Birmingham.

Spencer Bonsall was from Philadelphia, had some training as an apothecary in the 1830’s, and served as hospital steward with the 81st Pennsylvania during the Civil War. His journal consists of sixty pages covering the dates 6 May 1862 through 22 June 1862, and 4 December 1862 through 26 March 1863, and includes Bonsall’s activities during the Peninsula and Fredericksburg campaigns.

Flannery admits that Bonsall unfortunately did not reveal much in the way of his actual practice. In excerpts from the journal and in accompanying photographs, however, the article does capture the general responsibilities of a hospital steward.

The final article in the special issue is “The Use of Anesthetics During the Civil War, 1861-1865” (pp. 99-114), by Maurice S. Albin. M.D. The paper is an excellent survey of the employment of anesthetics during the war period. It is superbly illustrated with more than a dozen photographs of anesthesia equipment or important personalities. An extensive list of references, many of them from period sources, provides opportunities for further research and reading. The article includes discussion of the first surgical uses of ether and chloroform, their manufacture and procurement during the Civil War, the techniques of their use, and clinical reports of their use. 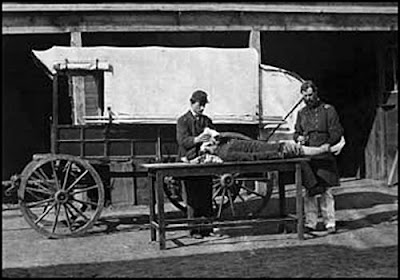 By the beginning of the Civil War, a sizeable body of knowledge existed on the use of anesthetic agents. Ether (more properly “diethyl ether”) has been known since medieval times, and was prepared by distillation of a mixture of alcohol and sulfuric acid. It was not until the mid 1840’s, though, that ether gained wide acceptance as a surgical anesthetic. The manufacture and use of ether was complicated by its ready flammability, and from the toxic byproducts of its synthesis.

Chloroform was discovered in the 1830’s, and its anesthetic properties first described in the late1840’s. It was originally prepared by the distillation of alcohol treated with bleaching powder. Chloroform may have been safer to produce, but it still resulted in a number of impurities, and its potency resulted in dozens of deaths when first used.

American military surgeons first used anesthetics during the Mexican-American War of 1846-48. Dr. Edward Barton holds the honor of giving the first anesthetic during a war, using ether during an amputation on March 29, 1847. A few weeks later, at the Battle of Cerro Gordo, about a dozen wounded soldiers were given ether during surgery. French and British surgeons used chloroform extensively during the Crimean War (1853-56).

Dr. Albin notes that not all surgeons were enthusiastic about anesthetics. Some felt that their use hastened hemorrhage and prevented proper healing. Others, recognizing that men seemed to be less disposed to the effects anesthesia, felt that their use was not “manly.”

With a major manufacturing base and control of the high seas, the Union Army had little difficulty in procuring ether and chloroform during the Civil War, either by importation or from domestic manufacturers such as E.R. Squibb and Company. Indeed, records show that more than a million ounces of each agent was purchased during the war.

Confederate procurement of anesthetics was complicated by the Union’s naval blockade, and a lack of an established manufacturing base. All the same, the Confederates were able to meet their needs by producing the agents at their own laboratories, through blockade-runners at sea, or by capturing supplies from the Union armies.

Dr. Albin points to several factors requiring a simple approach to delivering anesthesia during the war, not the least of which was the lack of expertise and experience among both Union and Confederate volunteer surgeons. Though more than thirty masks and inhalers had been developed to deliver ether and chloroform, including a nasal inhaler invented by the distinguished Confederate surgeon John J. Chisolm, anesthetics were generally applied by pouring the agent on linen, holding it at some distance from the patient’s nose and mouth for the first inhalation, then gradually moving the cloth closer until the desired effects were produced.

Dr. Albin explains that most of our knowledge about the use of anesthetics during the war comes from data in the Medical and Surgical History of the War of the Rebellion (MSH). A special chapter on anesthetics in the MSH (Volume II, Part III) mentions at least 80,000 instances where ether or chloroform were employed. These numbers are based primarily on Union records, but accounts from notable Confederate surgeons such as Chisolm and Dr. Hunter Holmes McGuire indicate that thousands more Confederate patients also were relieved by surgical anesthesia. The article includes a number of firsthand accounts describing the use of anesthesia, especially in field hospitals.

Dr. Albin is especially qualified to write this article. He earned his M.D. in 1957, has been a practicing clinical anesthesiologist at several hospitals, and has taught at a number of schools. He has been on the faculty of the University of Texas Health Sciences Center, San Antonio, for more than twenty years.

Dr. Albin is also past president of the Anesthesia History Association, and remains active in association activities. Indeed, at the AHA’s annual meeting last October, he delivered a talk on “The Wounding, Amputation, and Death of Stonewall Jackson: Anesthetic Implications.” In addition to dozens of scientific papers in anesthesia journals, Dr. Albin has published historical pieces on William Morton, whom he dubs the first “dedicated military anesthetist,” and on narcotic abuse during and after the Civil War.

“My interest in Civil War history dates back to my childhood, when my Dad, a history buff, took me on a tour of the Gettysburg battlefield,” Dr. Albin told me. He believes that the most important advance in anesthesia during the Civil War was that for the first time, thousands of medical officers (Union and Confederate) learned how to properly deliver an anesthetic. He points to the better understanding of the physiological effects of anesthetics and the utilization of more sophisticated delivery systems (for example, inhalers and vaporizers), as important post-Civil War advances.

For those wanting to learn more about the history and development of anesthesia, Dr. Albin recommends Keys’ The History of Surgical Anesthesia (1978) or Pernick’s A Calculus of Suffering: Pain, Professionalism, and Anesthesia on Nineteenth-Century America (1985).

From the standpoint of the soldier on the operating table, the relief from pain provided by anesthesia was inestimable. In a poignant end to his article, Dr. Albin quotes Confederate surgeon Dr. Hunter Holmes McGuire in his account of the amputation of “Stonewall” Jackson’s arm: “Chloroform was then administered, and as he began to feel its effects, and its relief to the pain he was suffering, he exclaimed, ‘What an infinite blessing,’ and continued to repeat the word ‘blessing,’ until he became insensible.”

I just wanted to thank you for the wonderful article. I liked it so much that I've included it in the blog's Friday link round-up over at Atlas Obscura.

Kindest regards, and please keep doing what you're doing!