Below you will find my "Medical Department" from the July 2011 issue of The Civil War News. Enjoy!

“In the present condition of the country, when the fatal calamities of war render it a duty incumbent on fathers, mothers, wives, sisters and brothers to seek their dead upon the battlefield and to bring home for burial the remains of their kindred, any invention which will tend to ameliorate these afflictions and assist in the performance of this sad duty is worthy of special notice.” – Scientific American, February 28, 1863

The Civil War proved to be a camp-to-grave proposition for more than 600,000 soldiers and sailors, North and South. Though the mission of military surgeons was to heal the living, they had an interest in corpses for a number of reasons, including: the postmortem examinations of dead soldiers – either from wounds or disease – allowed them to continue the study of anatomy first begun in medical school; the chemistry and biology of decomposition almost certainly appealed to their scientific minds; army regulations required a copious amount of paperwork on men who died in their care.

While innovations and inventions in the military arts have received significant attention in the Civil War literature, less attention has been paid to wartime improvements in the implements required for burial. In fact, inventors met that grim reality with dozens of improvements in coffins, caskets, biers, and embalming tools. 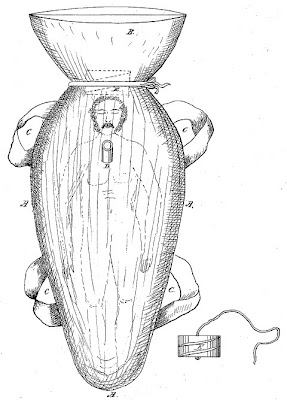 One of the more interesting inventions was designed for the battlefield: Dr. Thomas Holmes’ United States Patent No. 39, 291, “Improvement in Receptacles for Dead Bodies” (a rather fancy name for a “body bag,” and yet it was an invention ahead of its time). Holmes, of Washington, D.C., declared that his object was:
“…to facilitate the carrying of badly-wounded dead bodies hurriedly away that could not otherwise be quickly removed for the want of proper conveyances, or difficulty to procure boxes or coffins for removing the dead, as the boxes or coffins cannot be so easily transported or handled on the field of battle.”
The “receptacle” was made of india-rubber, oval-shaped, about six feet in length and about two and a half feet in width. The top was funnel-shaped, “so that a dead body may easily be thrust in at the top.” The bag had two handles, “so that the body can be immediately lifted up and carried off…to be transported safely to any desired place to be inclosed in a box or coffin.” A tube was attached near to the center of the bag receptacle to accommodate deodorants or preservatives, “until received by its friends to be...prepared for interment,” or embalmed.

Indeed, the very same Dr. Thomas Holmes - an 1845 graduate of the “College of Physicians and Surgeons at Columbia University,” in New York - is considered the “Father of American Embalming” for his experiments in improving the preservation of cadavers used for anatomical studies and in preparing bodies for burial. He was the premiere embalming surgeon of the Civil War era, reportedly preparing more than 4000 soldiers for burial, including the first prominent Union casualty of the war, Col. Elmer Ellsworth.
Still, not everyone could afford embalming. As Valentine Mott - one of the foremost surgeons of the era – declared:
“…in times like the present, when so many are bereft of one or more members of their family by the calamities of a horrid war . . . .the rich and the titled can afford to be embalmed, but the commoner must be pitched into the pit unheeded and unknown.”

For that reason, Mott praised the “rare inventive skill” manifested in Dr. G. W. Scollay’s “Air-Tight Deodorizing Burial Case” (U. S. Patent No. 34,700). Scollay, of St. Louis, held several patents related to undertaking. Scientific American magazine featured the case in one of its wartime issues. The long article outlined — rather graphically — the chemical and biological processes of decomposition, described the invention, and featured an engraving of the case with a fallen soldier as its occupant. 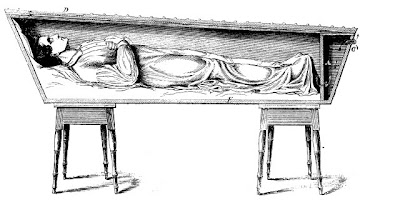 The mechanics of the innovative burial case received the approbation of the Western Sanitary Commission (which performed numerous and diligent experiments to test its utility) which appreciated the “safer, cheaper, and better method of preserving the remains of deceased persons without burial, for transportation to friends at a distance an object greatly desired by those having relations killed in battle, or dying in the military hospitals.”

The editors of Scientific American agreed, and declared, “Especially at the present time is its introduction to be desired, when desolation and grief exist in almost every home in the land.”
*
On a related note:

It is now summer and vacation season; many families – including many Civil War enthusiasts – will be making trips to battlefields and museums. If you are in my area – near Houston, Texas – consider a visit to the National Museum of Funeral History (NMFH, http://www.nmfh.org/).

I had the great pleasure of visiting this most interesting institution recently and had a terrific time. (see the photos from visit here!)
The museum – which opened its doors in October 1992 – fulfilled the aspirations of founder Robert L. Waltrip, who had long dreamed of an institution that would educate the public and preserve the rich heritage of the funeral industry. The NMFH is a non-profit 501 (c)(3) organization and all profits raised by donations, admissions, and gift shop sales go towards the operation of the Museum.

With over 35,000 square feet of exhibition space, the NMFH is the largest educational center on funeral heritage in the United States and perhaps the world. The museum boasts several permanent exhibits, including a recreated 1900s casket factory (with original casket factory artifacts), a display related to the Meso-American holiday of Dias de los Muertos (“Day of the Dead”), an 1860 German "Glaswagen" Funeral Coach (among other hearses), a display of “fantasy coffins” (including an airliner, animals, and a canoe), an exhibit dedicated to Papal funerals (featuring one-of-a-kind items), and other funeral heritage artifacts.
Of special interest was a wonderful “Civil War Embalming Exhibit” featuring the story of the afore-mentioned Dr. Thomas Holmes!
As experts in their field, the staff of the NMFH has been a leading consultant to many motion picture and television production companies as well as well as national and international print media. They have supplied “props” from the early days of the undertaker to the modern funeral home to “Kill Bill: Vol 1,” “Gangs of New York,” “Six Feet Under,” documentaries produced by A&E and Discovery, and other productions.
*
Finally:The grief of families who lost a loved one during the war did not end with the funeral, if they were even able to have one. In a previous column (April 2008, here) I interviewed Bernadette L. Atkins - writer, lecturer, photographer, collector, and expert - about 19th-century mourning rituals.
Bernadette is pleased to announce that her terrific booklet on the subject, Widow’s Weeds and Weeping Veils: Mourning Rituals in 19th Century America, was revised in 2010 and is available through http://battlefieldsandbeyondbooks.com/.
Posted by Jim Schmidt at 1:27 PM