Here's another piece of "quack medicine" history from my collection...you can see my other posts here.

As an added bonus, this post is really brought to life by some photos of a rare bottle and medicine package generously shared by Dan Cowman, MD, one of the premier antique medicine and ephemera collectors in the country. 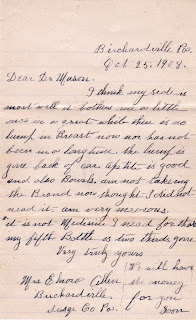 This letter was written by Mrs. Elnora Allen, Birchardville, PA , to Dr. C. H. Mason, Chatham, NY. Mason wrote a note in return on the back of a supper menu from his "New Windsor Hotel."

Mrs. Allen was apparently a user of the VCC (which she refers to as the "Brand") for a lump in her breast, which is now gone. She indicated she had other problems as well: poor appetite and bowels and a lump behind her ear, all presumably "cured" by the VCC, which she stated she has stopped taking (while on her fifth bottle). At $10 a pop, that was no small sum in the early part of the century.

Now she is "nervous" but doesn't think she needs medicine for that.

Dr. Mason replies that she can stop taking the "Bran" [sic?] but is sending her some "red pills" for her nervousness and recommends that she continue to bathe her breast in alcohol.

Mrs. Allen may have been inspired to try the "Vegetable Cancer Cure" after seeing a typical Mason ad, such as this one, promising that cancer is cured with "No Pain" and "No Knife" with a testimonial of a woman claiming her breast cancer was cured: 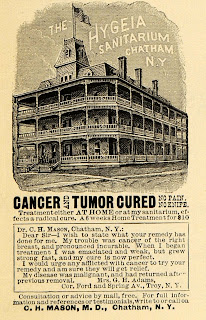 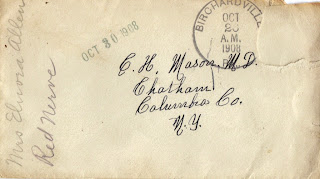 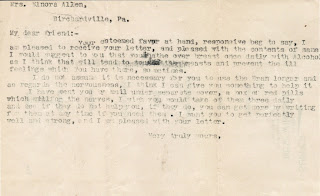 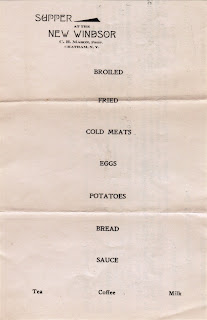 The building in the advertisement is the Windsor Sanitorium/hotel, first built in the late 1880s, it succumbed to fire at least twice in the 1890s, and was rebuilt as the "New Windsor." The recent book, Around the Village of Chatham, by Gail Blass Wolczanski (Arcadia Publishing, 2009) has some GREAT period photographs and illustartions of the Windsor in its various forms.

Not surprisingly, the VCC was entirely worthless as a cancer "cure"; billed as "a purely vegetable compound of roots, herbs, and barks, containing no minerals or poisons" may have been true but whatever ingredients it did contain were not effective. Once source indicated that the VCC contained "water, about 75 per cent; alcohol, 12.56 per cent; and vegetable ingredients, 12.34 per cent; composed of drugs without definite chemical principles, but similar to rhubarb, sarsaparilla, etc." (The Pure Food and Drugs Act: Hearings before the Committee on Interstate and Foreign Commerce, 1912).

Extant bottles of the VCC ("Cure" or "Compound") are very rare. I want to thank Dan Cowman, MD, for generously providing photographs of this marvelous bottle and package in his collection (below).

Readers of this blog will remember I met Dr. Cowman at the Houston Bottle Show in mid-July (you can read about it here). As mentioned at the beginning of this post, Dan is one of the premiere antique medicine collectors in the country and also collects medical ephemera. He is an expert who has always graciously answered my questions about collecting. 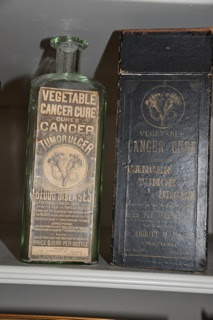 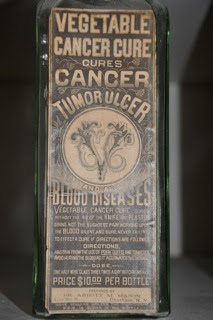 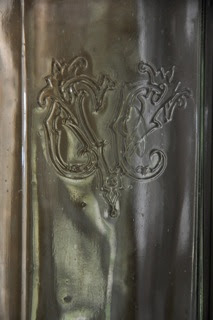 Unfortunately, the VCC was only one of many quack cancer cures marketed in the late 19th- and early 20th-centuries. Even more unfortunate is that quackery lives to this day and one can still find "unconventional" therapies that prey on the fear and mystery that is attached to cancer.

Hopefully I'll be able to feature more questionable cancer cures on this blog in the future, as my collection grows!