Below is my "Medical Department" column for the October 2011 issue of Civil War News. It draws on resources from the Civil War years to today as related to the sometimes-bleak employment prospects for the war's disabled veterans, some of whom were reduced to begging.

BROTHER, CAN YOU SPARE A DIME?
By James M. Schmidt
Civil War News – “Medical Department” – October 2011
What do an 1869 patent medicine almanac, an 1890 court affidavit, government labor statistics, a recent veteran’s magazine article, and modern studies of the Civil War veteran experience have in common? More than you might think! They all have a connection to disabled Civil War veterans and they all served to provide inspiration for this month’s column. 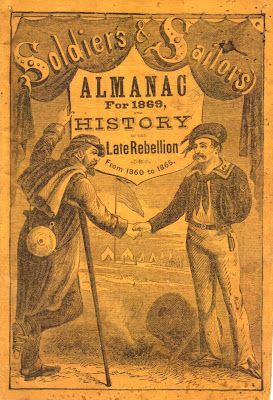 As a start, I found that each year the United States Department of Labor reports unemployment statistics for veterans. The most recent report (here) – for 2010 – indicates that the unemployment rate among all U. S. veterans in 2010 was less (8.7%) than for non-veterans (9.4%), but the rate for veterans of “Gulf War II” (defined as all who have served in the military since September 2001) was higher (11.5%), and was especially high (21.9%) among male veterans, aged 18-24.

A report in a recent (June/July 2011) issue of VFW Magazine used the recent government veterans’ unemployment report as a launching point for discussing the employment prospects of Civil War veterans, especially disabled veterans (sometimes referred to as the “left-armed corps” in period literature) on their return to the home front.

In short, it was no easy task for veterans to find gainful employment when they returned home after the Civil War, and it was doubly-hard for disabled soldiers, some of whom did menial work, peddled wares, or simply begged. (The full VFW Magazine article can be found here).

Quite a number of men in soldiers’ clothes have made their appearance in our crowded thoroughfares, who with arms in slings and support on crutches, hold out their hands to the passers for alms.

Likewise, early the following winter, a letter from a Union veteran to the New York Tribune reported:

I notice in passing through the streets of this great metropolis hundreds, aye, I might say thousands, of maimed soldiers, some with a leg or arm off, asking for alms. What attention is paid to them? I answer: none whatever; they are passed by in contempt. I do not mean to say by all, but by the majority.

The article goes on to describe the post-war role of the United States Sanitary Commission, which most Civil War enthusiasts recognize for its wartime efforts, in establishing employment agencies. Indeed, even before the end of the war, the Commission established the “Bureau of Employment for Disabled and Discharged Soldiers” with offices at No. 35 Chambers Street, New York City.

My own additional reading of period newspaper accounts and Sanitary Commission bulletins indicates that some of the businessmen in the city supported the arrangement and pledged to employ “in each of our places of business—as general messenger, or in other light work adapted for the disabled—at least one maimed discharged soldier or sailor.”

In his recent book, Sing Not War: The Lives of Union & Confederate Veterans in Gilded Age America (UNC Press, 2011), author James Marten includes an excellent description of the bleak employment prospects for many veterans, noting that many of the now-disabled soldiers were not suited for their pre-war occupations due to their wounds and were subject to unfortunate (but predictable) prejudice from the public and employers based on class distinction and other factors.

Marten also writes that for those who were not able to gain employment in offices or factories, “at least one town made it easier for disabled soldiers to make livings on the street by passing an ordinance specifying that only disabled soldiers were allowed to peddle without licenses.” In fact, this practice was more widespread than Marten indicates, as states (including Vermont, New York, and Pennsylvania) passed acts to the same effect. In fact, New York City still maintains municipal laws that allow for peddling by veterans.

The following handwritten document in my collection, dated April 9, 1890, Bedford, PA, is evidence of this less-known aspect of the experience of disabled veterans of the Civil War (you can see an image and full transcript of the document in an earlier post, here):

The petition of Gordon Hammer respectfully represents that he is an honorably discharged soldier of the United States; served in the war of 1861 for the suppression of the rebellion; that he is a resident of the Commonwealth of Pennsylvania and a native thereof; that on account of diseases contracted whilst in the service aforesaid he is unable to procure his living by manual labor; that he herewith exhibits a certificate from Dr. C. P. Calhoun an Examining Surgeon of the United States setting forth; that said Hammer is unable to procure his living by manual labor; also his affidavit to be filed in the office of the Prothonotary setting forth that he is the bona fide owner of the goods wares and merchandise in his own right which he proposes to hawk peddle and vend and that he will not engage to sell or peddle the same for any other person or persons whomsoever. He therefore prays that a license may be issued to him to hawk peddle and vend any goods wares and merchandise within the Commonwealth of Pennsylvania.

So, what types of wares did veterans like Gordon Hammer peddle? According to Patrick J. Kelly, in his book, Creating a National Home: Building the Veterans' Welfare State, 1860-1900 (Harvard University Press, 1997):

"Some private businesses attempted to assist war-disabled veterans and turn a profit at the same time. The Soldiers and Sailors Publishing Company printed a number of histories of the war and hired ex-servicemen with missing limbs to peddle these books. Ex-soldiers eager to play on public sympathy and profit from their wartime experience, wrote and published pamphlets entitled The Empty Sleeve and The Great War Relic."

Based on my search of the Library of Congress catalog and other online catalogs (WorldCat, etc.) other titles included The Soldiers' and Sailors' Half-Dime Magazine, The Soldiers' and Sailors' Tales of the War, and Williamsburg, and two interesting almanacs: Soldiers & Sailors Almanac for 1869 and History of the Late Rebellion and a similar volume entitled Veterans of the War, Whom all Should Assist, Offer their Almanac and History of the Late Rebellion (also 1869).

I happen to have both of these almanacs in my collection (the cover of one of them is provided as an illustration for this article). As Patrick Kelly mentioned, the first page of the almanac does contain the following appeal: “Agents Wanted: Disabled Soldiers and Sailors can find permanent and profitable employment in selling and canvassing for this work, as the commissions to such are very liberal.” 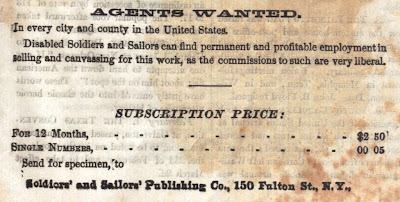 The almanacs were underwritten by H. T. Helmbold (a New Yorker who manufactured and sold the quack medicine “Helmbold’s Fluid Extract of Buchu”) in support of the goal of “assisting the Disabled Veterans of the War, the Widows and Orphans of those who fell in defense of our country, to earn an independent livelihood,” and (of course!) to allow veterans to “enjoy a long life of health and happiness by the use of the Great Sovereign Remedies prepared by Mr. Helmbold.”

The Department of Labor statistics cited at the beginning of this column indicate that about 1 in 4 veterans (more than 500,000 men and women) of Gulf War II have a service-connected disability. If there is any good news, it is that the unemployment rate of those Gulf War II veterans with a disability was 11.2%, lower even than those with no disability (13.6%, although not statistically different).

Perhaps, then, there has been some improvement in the employment prospects of men and women who have served our country honorably, especially those who became disabled in the process. Surely there is room for more.

[Many thanks to fellow Civil War News columnist Matthew Borowick: after this column appeared in print, he alerted ne to a news items about a new New Jersey program - "Helmets to Hardhats" - that heps veterans find construction jobs. You can read about it here.]
Posted by Jim Schmidt at 5:15 PM