Below is my "Medical Department" column that appeared in the November 2011 issue of Civil War News.

Stay tuned for more of my interview with Lauren LaFauci in another post later this week.


TAKING THE WATERS
By James M. Schmidt
Civil War News – “Medical Department” – November 2011
Can our country be seen as a body with its own “ill humors” that require uniquely American cures? Dr. William Burke thought so, and in his 1851 book, The Mineral Springs of Virginia, he wrote that the remedy for increasing sectional tensions between the North and the South could be found in the healing waters of Virginia: 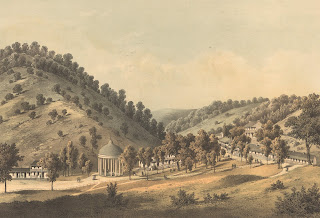 And to the people of the North, and to those of the South, the capillaries of the Union, I would say, flow on through your respective conduits, to the social heart of the "mother of states—Old Virginia. If your streams have been rendered turbid by prejudice; if too much carbonic acid, or unwholesome bile has mingled in their currents; she will urge you on to the healthy lungs in her parental bosom; she will oxygenise your ill-blood in the pure atmosphere of her mountains; she will render it ruddy and healthy, and send it back bounding with impulse, inspiring fraternal affections and sympathies, and connecting the frame of our social and political Union by tissues that shall not decay, and ligaments that can never be loosened.

[Note: you can read the 1851 book through Google Books here]

The paper exhibits exceptional scholarship, including the use of period medical literature, manuscripts (including letters and diaries written by visitors to the springs), modern studies of hydropathy in the North and the South, and what she aptly calls “medical-social” analysis to argue that 1) that southerners saw the springs as a medicinal resource specifically designed for the white southern body and 2) that the springs served as more than just a gathering place for people seeking a cure; they also became centers of political discourse supporting secession and slavery.

Dr. LaFauci was kind enough to answer my questions about the article, but also (and especially) about her varied interests; how they are applied in her classroom, research, and writing; and how the interdisciplinary study of “environmental history” can help us learn more about the Civil War generally, and Civil War medicine in particular.

“Broadly speaking, I am interested in the intersections of U.S. literature, history, environment, and culture, primarily from the period 1770 to 1870,” she told me. “More specifically, I am interested in the history of science, especially the histories of climate, disease, and racial formation; in environmental justice scholarship, especially examining the roots of our current environmental justice problems; and in theories of region and nation.”

Dr. LaFauci acknowledged with good humor that as an English professor writing about environmental history in an anthropology journal, “I am all over the map here!” But she explained to me further how her studies and training across a number of seemingly disparate subject areas actually help in her work and in her lectures:

“My degree is in English, but I am trained in American Studies and cultural studies more broadly. Thus, my courses tend to adopt American Studies approaches, utilizing primary source documents from history, such as advertisements for enslaved people who escaped bondage; images of objects associated with the topic under review, such as a nineteenth-century whaling harpoon; and maps, music, paintings, and other ‘texts’ not generally considered ‘literary.’”

The main focus of the article mentioned above is the use of “mineral springs” (naturally occurring springs that produce water containing minerals, dissolved gases, or radiation, that give them supposed medicinal value) for therapeutic value. The practice – generally known as “hydrotherapy” - can be traced back to ancient Rome and Greece and Native Americans. The practice became popular in the 1800s, and the resorts that have developed around mineral springs – such as those discussed in Dr. LaFauci’s article – attracted elite patrons who would visit to “take the waters” (inspiring the title of her article), meaning that they would drink or bathe in the mineral water.

Dr. LaFauci confined her research to the Virginia springs region (which encompasses parts of present-day West Virginia as well), but there were also resorts in Arkansas, Missouri, Texas, and other states. She explained to me the concept of uniquely southern bodies requiring uniquely southern cures for uniquely southern diseases:

“Many allopathic and hydropathic physicians accordingly believed that if disease was rooted in place, you could remove disease by altering a place-based element, such as water or air. As southern hydropaths observed the varying conditions at the springs they claimed individual springs had unique advantages for the treatment of diseases that were associated with particular environmental qualities.

“White southerners suffering from (southern) disease could thus travel from (southern) spring to spring as they found a combination suited to their peculiar(ly) (southern) complaints. So, for example, certain springs garnered a reputation for their benefits to curing liver complaints, while others alleviated respiratory ailments. In these ways, southern medical experts and laypeople alike began to conceive of the Virginia springs region as a bountiful, diverse pharmacopeic resource for the healing of southern bodies in particular.”

Although the article specifically discusses the Virginia spring resorts, Dr. LaFauci notes that resorts and the “water cure” were also popular in the North, but for different reasons. She attributes the popularity of the southern “waters” to “crisis intervention” of various diseases in the region’s “sickly season.” The popularity of hydrotherapy in the North can be attributed to a broader concept of “right living” and as one of several hygienic and social reforms.

Indeed, one of my other interests is in 19th –century phrenology (more on that in future columns!) and when I read period phrenological journals in my collection, I’ve observed that there is discussion of a variety of seemingly diverse movements in the pages: phrenology itself, of course, but also abolitionism, spiritualism, and more (including the “water cure”). I asked Dr. LaFauci if perhaps - as far as period journals were concerned - these weren't diverse topics at all. She replied:

“Yes, I think you are exactly right. Social reform movements flourished—especially in the northern states—in the years before the Civil War. The antislavery and women’s rights movements are perhaps the most well known, but there were also movements against tobacco, gambling, and alcohol, and movements supporting dress reform, communal living, and vegetarianism, among many others. Many of the leaders, supporters, and sympathizers with these individual reform movements often found themselves interested in and engaged in various other reform movements as well. So yes, it seems there was a great deal of overlap.”

I encourage everyone to read “Taking the (Southern) Waters” and to keep an eye out for more fascinating and exceptional research from Dr. Lauren LaFauci, whose interests – fortunately for us – are hard to pin down to one area! Presently, Dr. LaFauci is working on another project – the Confederacy’s use of botanical resources - that will be of special interest to readers of this column.

[Later this week I will post my full interview with Dr. LaFauci, in which she also discusses her book project that looks at how ideas about “nature” or “environment” evolved alongside ideas about “race,” disease, and the body in the United States, with a particular focus on the southern states; the concept of the “Doctrine of Signatures” and how it applied to the Virginia mineral waters; why the springs did (or didn’t) bottle their waters for consumption; and other aspects of environmental history.]
Posted by Jim Schmidt at 8:19 AM