When I first introduced my "Galveston and the Civil War" book project for The History Press a year ago (here), I included a link to a YouTube video of Glen Campbell performing his 1969 hit, "Galveston."

It shouldn't be a surprise that the Island City had inspired songwriters before that...indeed, an 1870s book - Allan's Lone Star Ballads: A Collection of Southern Patriotic Songs, Made During Confederate Times (1874) - contain several, most of them celebrating the Confederate victory in the Battle of Galveston on January 1, 1863.
They include:"Bombardment and Battles of Galveston" (to the air of Auld Lang Syne)...a ballad that covers the period from June 1, 1862 to January 1, 1863!
"The Recapture of Galveston" (to the air of Happy Land of Canaan)

An added verse to "The Bonnie Blue Flag":

The New Year's battle at Galveston was glorious and great. Our heroes drove the Yankees from the loveliest spot in the StateAnd here's to General Magruder, the Champion of Galveston, Who with a couple of old cotton boats made the Yankees "skedaddle hum." Hurrah, hurrah ! for Southern Rights, hurrah !Hurrah for the Bonnie Fag that waves o'er Galveston.
"The Glorious January 1, 1863" (to the air of The Oaks of James Davies)
"The Battle of Galveston" (to the air of The Harp that Once Thro' Tara Halls)
The sad: "In Memoriam" - a solemn lament for Lt. Sidney Sherman, who was killed in action at the Battle of Galveston...

...and, the comical:
BURIAL OF THE TOUGH BEEF IN GALVESTON
Died, in the Butcher's Pen, at Galveston, on Saturday night, March 5, 1864, an ancient Gentleman Cow, in the 129th year of his age. Disease. Poverty. His remains were issued to the troops, and buried by Col. Hobby's Regiment, in the Public Square, with military honors.

The Sabbath sun shone bright and fair, The earth rejoiced in gladness ; But soon, ah, soon ! the balmy air Was pierced with sounds of sadness.
The measured tread of feet was heard : Then came the mourning column ; And hearts of all were deeply stirred At sounds and sights so solemn.
The dead came first, a mangled mass. A poor old cow's fore shoulders ; (Who died, they said, for want of grass,) It frightened all beholders.
Some rushed away in wildest fright, And all agreed in saying They ne'er had seen just such a sight And some fell down to praying.
The muffled drum its mournful tale Breathed o'er this beefy MummucksBut sadder, deeper, came the wail From soldiers' empty stomachs.
Then next came on, with arms reversed, The troops ; all thoughtful, slow and sad — No money in their hungry purse, No dinner to be had.
Their manly tears fell at their feet ;
(The dead was not a sinner,)
But tears will flow o'er bread alone ; no MEAT
For supper, breakfa


st — dinner.
They buried the dead with sober brow, And thought of to-morrow's fast — Thus rests the ancient gentleman cow, (His fatless ribs) at last.
Andy Hall, of the always excellent "Dead Confederates" blog, wrote an article about the "burial" for the "Front Line Blog" of The Civil War Monitor (here).

Other songs celebrate Galveston's Civil War personalities such as Gen John B. Magruder, Col. Tom Green, Texas regiments, and Texas...generally. A link to the book at the Internet Archive is provided below.

(The manuscript for my forthcoming book on Galveston and the Civil War is due to the publisher in early July and will be published this autumn...keep your eyes on the blog for updates!) 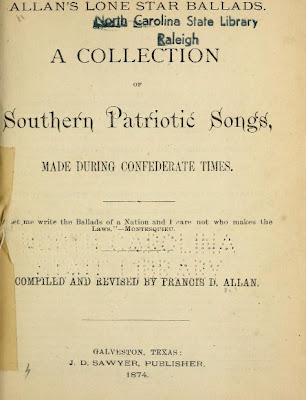 Hi Jim,
Great post. I read them and forward them on to another friend. I have always loved the war songs of both sides so this post is special to me. My father knew a lot of the ones connected to the Civil War. His mother used to sing blood curdling ones about Ireland!
My mother always was hoping that she wouldn't sing!

Thank you for the link to the Dead Confederates. In my family, we had true splits. The father and some suns fought for the North and one for the South as an example.

Just want to say that I really enjoy your posts and I pass them on.

I love how people personalize songs and add verses. The bit about Galveston in the Bonnie Blue flag was funny:)

Carol - Thanks so much for the kind comment! I can hardly think of a more gratifying response than that you feel the posts are suitable to pass on to friends and relatives...that means a lot to me. Andy Hall's "Dead Confederates" blog is definitely one of my favorites.

Some of the verses/songs are funny indeed.

What I like about the ballads, especially, is that they provide a nice framwework for my narrative, because at their heart, that's what they are: a war story set to song.

So I am going to try and include a few verses in my battle narrative and a few of the celebratory verses when talking about the aftermath.

It was a Union defeat, and an embarrassing one at that (a "disaster" it was called in official reports and the press), so there was not much to sing about from that end.

The lament for Sidney Sherman is moving.