My latest "Medical Department" column from The Civil War News is posted below.

Until the April 2013 issue, this column had taken a bit of a “sabbatical,” but I still had my eye on interesting reports about the Civil War in the medical and scientific literature.  I share some of the highlights below.

In one study – “Sleepless Vigilance: ‘Stonewall’ Jackson and the Duty Hours Controversy" - published in the American Journal of the Medical Sciences (December 14, 2011), the authors examined "the effect of sleep deprivation on Jackson's battle decisions in light of experimental data.”  The report adds a historical perspective to the modern study of the effects of sleep deprivation in the modern military (as well as debates over limiting the duty hours of physicians and other professionals).

Drawing on a variety of material - “myriad letters and reports and…eyewitness writings of numerous intimate associates” – the authors describe Jackson's sleep habits, his famous "night marches," and offer an interesting statistical analysis of the quality of Jackson's command decisions in battle based on his "sleep opportunities" prior to the engagements.

They conclude (with due caution) that Jackson's poor decisions resulted from sleep deprivation which mirrors modern scientific medical studies which show that lack of sleep is associated with "decreased vigilance, deterioration in mood states, difficulty in concentrating and impaired learning and memory."

In “Remains of War: Walt Whitman, Civil War Soldiers, and the Legacy of Medical Collections” (Museum History Journal, January 2012, Vol. 5, No. 1, pp. 7-28), the authors – all from the Department of History and Anthropology, Edinboro University of Pennsylvania – highlight anatomical specimens of four Civil War soldiers held in the collection of the National Museum of Health and Medicine.

The few items – only a handful of the more than 2,000 Civil War-related items in the museum’s collection – are special because they are “from soldiers who the poet and essayist Walt Whitman nursed in the wartime hospitals of Washington, DC.” They include the thigh bones of soldiers from Ohio, New York, and Pennsylvania infantry regiments who were wounded in battles in Virginia between 1862 and 1865.

The authors unite photographs of the specimens; details of the soldiers’ wounding, treatment, and death; and the words of Walt Whitman specific to these very soldiers, as published in Specimen Days and other works, such as this lament to his mother:

“I have just left Oscar Cunningham, the Ohio boy—he is in a dying condition—there is no hope for him—it would draw tears from the hardest heart to look at him—his is all wasted away to a skeleton, & looks like someone fifty years old.”

The authors justly conclude that “uniting these remains with Whitman’s words yields a new interpretation that bears witness to individual histories during a time of unprecedented conflict in American history.” Readers can see the entire report with illustrations here.

Disease and infection killed more soldiers during the Civil War than battlefield deaths.  It’s true that the groundbreaking finings of Pasteur and Lister on microbes and their connection to surgical infection were not published until after the war, but the companion conventional wisdom that wartime surgeons were empirically ignorant of infection, or numb to methods or attempts to combat wound infection, is not true.

In “Gangrene Therapy and Antisepsis Before Lister: The Civil War Contributions of Middleton Goldsmith of Louisville” (The American Surgeon, Sept. 2011, Vol. 77, No. 9, pp. 1138-43) by Dr. John M. Trombold, Department of Surgery, University of Louisville, describes Goldsmith’s innovative experiments with bromine during the war.

The article includes a description of hospital gangrene; attempts to combat the infection via debridement, poultices, topical solutions, and other methods; a biography of Goldsmith; and an excellent description of his wartime experiments with bromine.  One of the most interesting aspects of the work was an independent six-month clinical study conducted by another surgeon at Goldsmith’s invitation.  The work culminated in the publication of A Report on Hospital Gangrene, Erysipelas and Pyaemia (1863).

Dr. Trombold’s excellent article can be seen in its entirety here 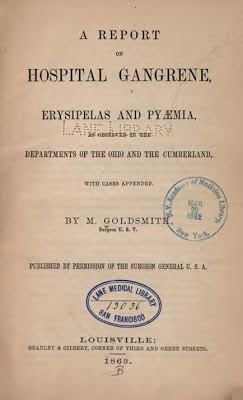 There were many others, but these reports serve as evidence that there is always room for interesting retrospective analyses and biographies of people, places, and concepts related to Civil War medicine.

I’ve already got some great interviews lined up for columns in the coming months on drunkenness in the army, slave medicine, artificial limbs, and more.  So stay tuned!
Posted by Jim Schmidt at 9:33 AM

I will definitely need to share this theory about Stonewall Jackson with my husband and two sons. A few years ago, we went on a Stonewall tour, tracing his movements as he entered his final battle. We were shown the specific area of the woods where he was believed to have been shot, then we drove along his ambulance route, stopping at the farmhouse where his arm was buried (and, yes; there were lemons left there). We then went to Guinea Station to see where he died and then to Lexington, to see his home and his tomb.

Thanks Kelly for the great comment! My best friend and I also made a long weekend trip to Fredericksburg and saw all the local battlefields and the Stonewall Jackson sites. I haven;t been to Lexington yet though. You might also enjoy another post of mine about Stonewall Jackson here: