Here is a look at another wartime almanac in my collection. This one is for Herrick's Pills from 1865. Unfortunately, it's missing the front and back cover pages (hey, people, remember: it's OLD!) but there are still some GREAT gems inside!

Herrick's Pills are mentioned in a wonderful letter from soldier Delavan Bates:

Delavan Bates to his father, January 29, 1865
"Battery no. 4 is right in front of our camp and during the performance the captain in command thought he would do something smart and so he threw a few solid shot from his little 12 pound smooth bore Napoleon guns down toward the river. The rebs noticed it and sent over half a dozen of those big shells and elevating their pieces a little too high for the battery, the shells all landed right around us...I saw a tree one of them hit. It was a tall hemlock about twenty-four inches through. The shell struck it about twenty feet from the ground and took it square off. Imagine such a piece of iron striking a man side of the head. Herricks pills wouldn't save him."

(Bates joined the 121st New York Volunteers, participated in the important battles of the Civil War in the east, including Gettysburg, Chancellorsville and Fredericksburg. He was regularly promoted and served as Colonel of the 30th United States Colored Troops. He earned the Medal of Honor for his heroism at the "Battle of the Crater" at Petersburg).

1) Typical almanac page with sunrise/sunset/phases of the moon, etc...notice among the "Aspects, Events, Etc." they have listed some important dates relative to the Civil War. 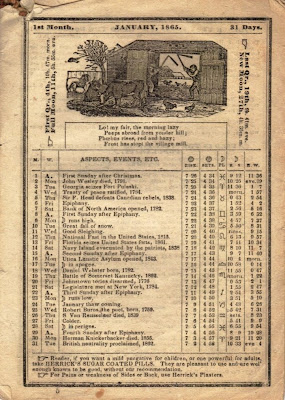 2) and 3) More than any other patent medicine almanac I have seen, Herrick's really marketed themselves to soldiers. Notice the advertisements for "Herrick's Army and Navy Pills" as well as the soldier testimonial from James W. Loucks! 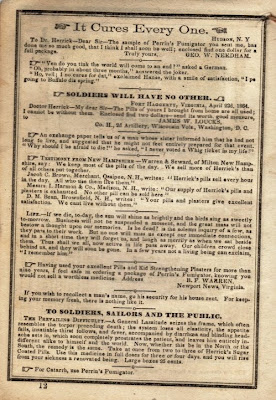 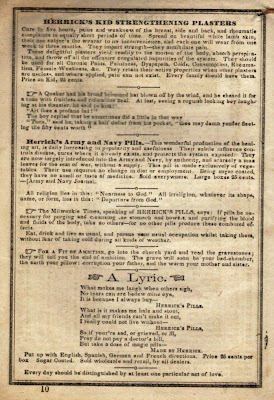 4) All patent medicines "oversold" their merits and a single medicine could be billed as curing a dozen (or more!) individual ailments. However - this is one of my favorites: notice that Dr. Perrin's Fumigator is good for "Minister's Sore Throat"! 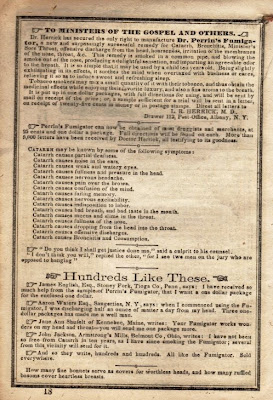