Book Review - This Republic of Suffering 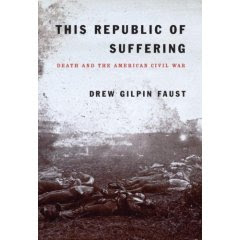 I may be late to the game, but I'm in it: the hardcover edition of Drew Gilpin Faust's This Republic of Suffering has been out for more than a year - indeed it's now in a softcover version - but I've only recently had a chance to read it...I'm quite glad I did. In fact, though I had it on my shelf for several months, I had delayed reading it, being somewhat put off by both negative and fawning reviews. After reading it, I find that the "truth" is somewhere in between.

In short, I enjoyed the book very much. Having previously commented on the subject of death and dying on this blog and in my "Medical Department" column for The Civil War News, I found her first chapter - "Dying" - familiar territory. The rest of the book, though, was a revelation; still, I found a few faults and "missing pieces" which I'll point to later in this post. Highlights for me included her expositions on:

a) Spiritualism - a subject I'd like to look into further...her description of period journals such as Banner of Light - which printed purported "Personals" from soldiers beyond the grave - was very interesting.

b) I especially enjoyed the explanation of the importance of published funeral sermons...it really added to my understanding of a previous post of mine on the drowning of Dr. James M. Newell. That column was based largely on the text of a funeral sermon for Newell that was published shortly after his memorial service in the Fall of 1862.

c) Look, I'll admit I don't "get" poetry - I never have...nevertheless, Faust's description of the effect of the Civil War - and its attendant suffering - on the writing of Whitman, Melville, Dickinson, and Bierce, and the "battle" between sentimentality and irony, was very enlightening.

I did find a few areas that were ignored but that I think would have really added to the subject and the book:

a) Life Insurance - as a financial or practical matter, it may seem too mundane for a "high brow" work to consider the role of life insurance policies in the war...in fact, several well known extant firms - especially New York Life - have a fascinating and well-preserved war story, and a review of soldier letters in their files - of which I've seen a few - would reveal another of the ways in which they faced and planned for their deaths.

b) Gallows Humor - given the subject, the book has been understandably described by several reviewers as sad...others have criticized the author for purposely appealing to emotion...as either a counter-balance to the misery and/or to encompass more emotion, I would have liked Faust to discuss how soldiers used "gallows humor" in their letters and/or memoirs. I'm reminded of a wonderful anecdote in one of my favorite post-war memoirs: Eugene Ware's The Lyon Campaign. In speaking of the prelude to the 1861 Battle of Wilson's Creek, Ware wrote:

"the marching was anything but a funeral procession. The boys gave each other elaborate instructions as to the material out of which they wanted their coffins made, and how they wanted them decorated. Bill Huestis said he wanted his coffin made out of sycamore boards, with his last words put on with brass tacks, which were: "I am a-going to be a great big he-angel."

c) Spiritualism - Faust does a great job in addressing the rise and influence of the Spiritualist movement; still, she missed a great opportunity by ignoring post-war charlatans such as William Mumler who took advantage of people's mourning and suffering.

d) Invention - In the chapter "Burying" Faust touches only briefly on some of the advances made in coffins, etc. In fact, there were dozens of wartime patents for improvements in coffins, caskets, biers, embalming implements, "body bags," and more.

I highly recommend the book to serious readers of Civil War history.
Posted by Jim Schmidt at 5:26 PM

What are the chances?! I just posted my review of "This Republic of Suffering" on my blog yesterday! I enjoyed your review, I also really appreciated her analysis of the Civil War on writers and poets. A tremendous book

Mark - I know! It is a coinky-dink, isn't it? I really liked your review, in no small part because you took to task previous writers/historians who did indeed ignore the notion of the war as a tragedy. I too was impressed at the breadth of sources that Faust used. Keep up the great work!