Did you know that eye injuries have gone from less than 1% of total wounds in the Civil War to greater than 10% during modern operations, including those in Iraq and Afghanistan?

It is due in no small part because of the hot, dirty, and dustry conditions. The emergence of IEDs and the use of lasers have also contributed to an increasing number of eye injuries. Indeed, recent news reports describe injuries - including permanent blindness - from green lasers (or "dazzlers") being used in the campaign.

To carry on with the theme, below is an older "Medical Department" column of mine about the eye problems that Jefferson Davis suffered. 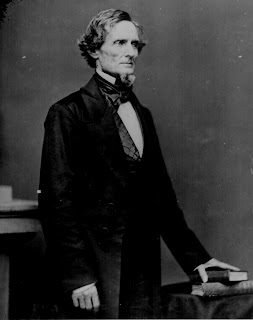 When it comes to having your photograph taken, do you have a “good side”? Jefferson Davis, President of the Confederate States of America, did. Davis fought health problems for a good part of his life, including a nearly fatal bout with malaria in 1836. He was seriously ill again in the winter of 1857-1858, and by February he began suffering from a relapse of a chronic inflammation of his left eye. The disease was so bad that a visiting ophthalmologist commented “I do not see why this eye has not burst.” As a result, most photos of Davis are in right profile, thus hiding his left eye.

In their article, “The Eye Disease of Jefferson Davis (1808-1889)” (Survey of Ophthalmology, Nov-Dec 2006, Vol. 51, No. 6, pp. 596-600), Dr. Richard W. Hertle and Robert Spellman use historical evidence from multiple sources to propose a diagnosis for Davis’s eye condition and consider how the disease could have influenced military and political decisions during the Civil War. Dr. Hertle has also written about eye injuries and the Civil War in general in a previous article entitled “Ophthalmic Injuries and Civil War Medicine” (Documenta Ophthalmologica, 1997, Vol. 94, pp. 123-137).

Dr. Hertle is a native of Brooklyn, New York. He earned a bachelor's degree at Ohio State University in 1979 and his medical degree in 1984 at Northeastern Ohio Universities College of Medicine. After internships and fellowships at hospitals in Ohio he was a resident at Boston University Medical Center. He has also taught at the University of Pennsylvania School of Medicine and was a senior scientist at the National Eye Institute of the National Institutes of Health . Presently he holds a number of appointments, including Chief of the Division of Pediatric Ophthalmology, and Professor of Ophthalmology, at the University of Pittsburgh’s School of Medicine.

Dr. Hertle’s co-author, Robert Spellman, is his nephew. Robert (affectionately known to his uncle as “Bobby”) is a senior at Monsignor Bonner High School in Upper Darby, Pennsylvania. Robert has been involved in Civil War living history for about five years. “He was fascinated by my passion for the Civil War and this became a part of our relationship,” Dr. Hertle told me. Robert has also worked at the Civil War Library and Museum in Philadelphia.

Dr. Hertle became interested in Jefferson Davis’s eye condition after reading William J. Cooper’s biography, Jefferson Davis, American (Knopf, 2000). “I read Cooper’s book and found hints of his problem,” he told me, adding “This was the impetus for trying to find out exactly what he had and how this may have influenced some of his decisions.”

They begin the article with a brief biography of Davis as soldier, politician, and statesman, and then turns to a discussion of the eye disease that can be traced back to his first bout with malaria. About a dozen years later, during a relapse, Davis suffered a “severe eye attack” such that, in the words of his wife Varina, he could not “bear a ray of light on either eye.” Documents show that the disease recurred almost annually from that time and through the Civil War.

In a severe relapse in1858, Davis was seen by two famous eye physicians of the time – Drs. Robert Stone and Isaac Hayes. Stone described the condition of Davis’s left eye in detail, including “ulceration of the cornea,” “abscess of the eye,” and “hypopyon” (a collection of pus cells in the aqueous humor). It was Hayes who commented that he couldn’t see why Davis’s eye had not already burst. Davis was given treatments of the day, including “quiet” and bandages soaked in herbal remedies; he also underwent eye surgeries in 1859 and 1860.

Next, Dr. Hertle puts on his clinician’s hat, and discusses a possible diagnosis of Davis’s disease. He feels that it can be divided into at least two parts – a primary disease and the secondary consequences of the inflammation and, not surprisingly, the treatments. In Dr. Hertle’s opinion, the list of possible primary diseases is long, and includes no less than a dozen infectious agents. Using a combination of anecdotal and scientific evidence – including modern studies – Dr. Hertle and his nephew conclude that Davis suffered from “herpes simplex keratouveitis,” a condition that remains a major cause of injury to the eye.

An especially interesting part of the article concerns the authors’ opinion that Davis’s eye condition had consequences during the Civil War, especially during the spring and early summer of 1863. At that time, Davis was confined to his home for weeks at a time, and the disease thus interfered with his duties as President of the Confederate States. Coincidentally, it was also a pivotal period in military planning for the Confederacy. The authors argue that the eye disease, or perhaps medicines used in the treatment, impaired Davis’s decision-making ability resulting in poor advice to and poor communication with senior military commanders such as Lee and Pemberton.

Dr. Hertle has been a history buff for a long time - an interest that he inherited from his father. “I have been an amateur Civil War historian since about 1990, when, during my training I was faced with taking care of many trauma patients,” Dr. Hertle told me. He recognized a common theme throughout history: the influence of war on rapid developments in medical innovation and practice. “The Civil War was particularly interesting as a focal point for change in the pre-microbiologic era,” he told me, adding “The more we look at the Civil War period the more firsts in medicine and surgery become apparent.”

Jefferson Davis’s is not the only interesting eye-related story in the Civil War. “Benjamin Butler had strabismus (“lazy eye”),” Dr. Hertle told me, adding that “there were also great advances in prosthetic eyes as a result of the War.” He noted that discoveries regarding the neurology of the visual system were part of larger investigations and observation of battlefield injuries and diseases on the brain seen at large specialty hospitals in which patients with neurological diseases were cared for.

Modern war, including the present war in Iraq, poses some particular challenges when it comes to military ophthalmology. Indeed, eye injury rates in battle have been increasing over the last 150 years. Data from the U.S. Army’s Center for Health Promotion and Preventive Medicine show that ocular injuries have gone from less than 1% of total injuries in the Civil War to 13% during operations Desert Shield and Desert Storm.

“I think that ‘high tech’ instrumentation and desert warfare require special visual and ocular motor skills and protection, respectively,” Dr. Hertle told me. “The acceptance by the armed forces of refractive surgical procedures (e.g., LASIK and radial keratotomy) has allowed our soldiers to go into battle without the need for specific optical correction such as spectacles and contact lenses.” He added that the dry, dusty and intense UV rays in the present theaters of conflict can be detrimental to the health of the ocular surface, lens, and retina.
Posted by Jim Schmidt at 12:32 PM

Would not the increased fragmentation of explosive shells contribute to the increasing number of wounds to the eye? More metal fragments in the air would increase the number of wounds. Airbusting shells designed to explode at about four to six feet above ground would also expose the upper body to greater wounding. Another consideration would be military tactics. Men went from standing in lines to fight to getting behind cover and getting lower to the ground, in trenches, or fox holes from 1861 onward. This increased the incidence of head and shoulder wounds in general and would increase the number of wounds to the ocular area.