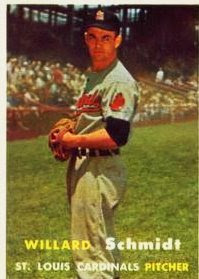 A couple of years ago, I put up a short post about the passing of my great uncle, Willard Schmidt, a former pitcher for the Cardinals and Reds in the big leagues. 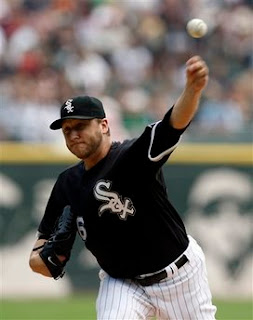 The recent perfect game pitched by Mark Buehrle of the Chicago White Sox brought back two good memories:
1) Being a fan of the Sox - I lived in the far NW Chicago 'burbs from 1995-2004 and picked the Sox as my new team to root for (having been a lifelong Royals fan)...that's not easy (maybe it is) when your entire family is Cubs fans. I got to see several games at new Comiskey and Buerhle (and Paul Konerko) is among the few, if only, players left from the teams I rooted for. 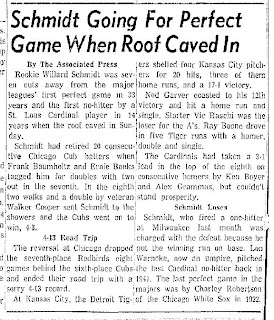 2) Not so much a memory, because I wasn't even born yet, but I sure would have liked to have been there: the *almost* perfect game that rookie Willard Schmidt pitched against the Cubs in early September 1955...20 straight outs into the 7th inning before the roof caved in...must have been exciting for Willard and the fans, though. Who is to blame? Either Ernie Banks or some dopey Cubs fan who jinxed Willard by talking about a perfect game while it was in progress...don't you know that's taboo?!
Enjoy this newspaper clipping from the September 5, 1955, issue of the Salina (Kansas) Journal.
Posted by Jim Schmidt at 9:30 AM

Did you know that, according to Baseball-Reference.com, poor Willard, just 17 days after the near perfect game, pitched 12.2 innings with 9 strikeouts against the Cubs and lost again! Despite a 3 hit (one a HR) 2 RBI game from Musial the Cubs scored 4 times in the top of the 12th inning to edge Willard and the Cardinals 7-5.