In the first and second installments of this series, I described the rising popularity of so-called “patent medicines” up to the years of the Civil War and the booming numbers of nostrums during the war and after. In Part III, I described Abraham Lincoln’s own interesting association with “quack medicines,” from his days as a lawyer in Springfield, to his inauguration, his presidency, and many years after his assassination.

In this concluding part of the series, I describe how patent medicine firms marketed their wares specifically to Civil War veterans in the post-war years, and – as during the war – counted on testimonials from the erstwhile soldiers to prop up their “snake oil” to the American public. 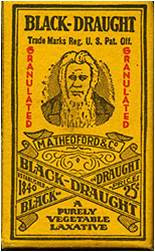 Two Union army veterans – Z. C. Patten and T. H. Payne - wasted little time getting in on the patent medicine action. After they were mustered out of the army in Chattanooga, they remained in the city and opened a stationery business and soon after purchased the Chattanooga Times, which was burdened with debt. The ambitious Patten then bought the recipe for “Thedford’s Black Draught,” a laxative tea first formulated in the 1840s by Dr. A. O. Simmons and then passed to Simmons’ son-in-law, J. H. Thedford in the mid-1850s.

Patten then began selling Black Draught through his “Chattanooga Medicine Company,” concentrating his sales in country stores that dotted the landscape of the ex-Confederacy, with a few border-states added for good measure. His association with the Times provided an ideal venue for advertising. The company’s Black Draught and “Wine of Cardui” (for “female complaints”) become Southern staples. 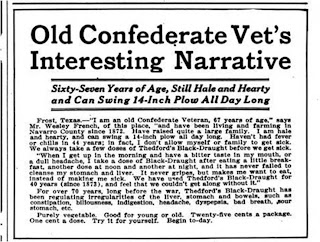 ging veterans attached their names to Black Draught testimonials, including this one from a 1916 issue of Confederate Veteran:

“I am an old Confederate veteran, 67 years of age…I am hale and hearty and can swing a 14-inch plow all day long…I don’t allow myself or my family to get sick…When I get up in the morning and have a bitter taste in my mouth or a dull headache, I take a dose of Black Draught after eating a little breakfast, another dose at noon and another at night, and it has never failed to cleanse my stomach and liver.”

The firm has remained in Chattanooga to this day. In 1969, it went public, and adopted the name “Chattem” (NASDAQ = CHTT). It no longer sells Black Draught or Cardui, but readers are no doubt familiar with many of its products, including Gold Bond Powder, Selsun Blue, Aspercreme, and other popular consumer goods. Even more fascinating is that the current CEO of Chattem, Zan Guerry, is a descendant of Z. C. Patten!

Another well-known nostrum that made a splash among veterans was “Dr. William’s “Pink Pills for Pale People.” The medicine was invented in 1886 by Dr. William F. Jackson, an Ontario physician. In June 1890, another Canadian – pharmacist George T. Fulford – purchased Jackson’s patent for $53. Fulford invested heavily in advertising (more than $300,000 in the first years alone!) and was soon selling millions of boxes a year in Canada. Fulford then formed a partnership with a Schenectady, New York, businessman to market the pills in the United States. 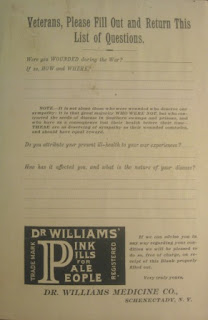 Fulford claimed a remarkable number of cures for his “Pink Pills,” including anemia, bronchitis, headache, indigestion, lumbago, neuralgia, rheumatism, and St. Vitus’ Dance. In the mid-1890s, the Schenectady branch sent out a 4-page marketing pamphlet to Union veterans (the author has the brochure in his collection). Three of the pages had color prints or sketches to provide the reader with fond memories of their service. Inside, the brochure invited veterans to “please fill out and return this list of questions” so that they could be advised on a cure by return mail, free of charge:

“It is not alone those who were wounded who deserve our sympathy: it is the great majority WHO WERE NOT, but who contracted the seeds of disease in Southern swamps and prisons, and who have as a consequence lost their health before their time – THESE are as deserving of sympathy as their wounded comrades and should have equal reward.”

“Pink Pills for Pale People” also garnered veteran testimonials, including this one found in an 1898 issue of American Gardening:

“I served three years in the 124th Illinois…The strain of army life did its work in undermining my health…For some time I suffered from general debility and nervousness…My brother is a doctor, but all his efforts to help me failed…Finally, having read articles regarding cures…by Dr. Williams’' Pink Pills for Pale People, I decided to try them. That was in 1896. I bought a box and took the pills according to instructions. Just four days later, I had the happiest hours I had known for years…”

Given the stakes at hand (patent medicine sales grew to nearly $80 million by the turn of the century), it is not surprising that soliciting testimonials from veterans had clever, cunning, and downright ugly aspects. For example, Dr. Coutant – the maker of a very dubious deafness cure – promoted his nostrum through the testimonials of one Henry Farrar. Under the banner headline, “His Hearing Was Restored,” Coutant’s ads showed sectional sensitivity: in Northern newspapers, Farrar was a “Civil War veteran” shown in the garb of the Grand Army of the Republic (GAR), declaring that his “beloved bugle…led troops to many a victory.” In Southern papers, however, Farrar was shown in civilian dress, identified simply as a musician, whose “beloved cornet…helped in his career.”

More sinister was the practice of “testimonial brokers” who solicited testimonials on a contract basis, earning as much as $5,000 by soliciting endorsements from senators ($75 a pop) and congressmen ($40) and influential men in the War Department. One such broker bragged that there were “easy-going congressmen” who would “sign their names to anything” and “a lot of broken-down army veterans” hanging around Washington, who would – for a few dollars - “go their old army officers on a basis of old acquaintance sake and get testimonials.”

The Comstock Medicine Company engaged in a more innocent practice: in the late 1880s, the company took advantage of the growing popularity of Confederate currency by printing advertisements for its “Dr. Morse’s Indian Root Pills” on the back of facsimile rebel $20 bills!

Sometimes, testimonials could get veterans into hot water. Comrade J. R. Ketchum – a veteran with the GAR in Missouri – used his Post letterhead to commend a patent medicine to the nostrum’s maker in Maine. The medicine company quickly distributed facsimiles of the letter throughout the country. GAR members were forbidden to use the badge of the Order or the letters “G-A-R” in advertisements for any private business. Ketchum was gently reprimanded for his careless mistake.

In another case, reported in an 1897 issue of the Boston Medical and Surgical Journal, a Massachusetts veteran had given “a testimonial to a patent-medicine manufacturer, stating that he had been entirely cured by his nostrum. It seems that he was receiving a pension for the ills of which the medicine cured him, and that when the authorities learned of his recovery, his pension was cut off.” The Journal wondered “Is he likely to suffer relapse? And if he does will he get back his pension?"

A British medical journal, seeing reports of the veteran’s plight in American papers, had the answer: “[The authorities] would, we imagine, be more likely to recommend him a further course of the patent remedy which had proved so efficacious before.”
Posted by Jim Schmidt at 1:40 PM