THE SECRETS OF MY PRISON-HOUSE
By James M. Schmidt
The Civil War News – “Medical Department” – September 2009
And not a man of them that we shall take Shall taste our mercy
- Henry V, Act IV, Scene 7
Such was Henry V’s violent threat regarding the fate of prisoners in his hands after finding that England’s “boys of the luggage” had been mercilessly slain by his French enemy at Agincourt. Henry’s anger - born of Shakespeare’s hand – was echoed after the American Civil War as both sides pointed fingers at the other regarding the treatment of captured soldiers in the other’s hands. Names such as Andersonville, Belle Isle, and Henry Wirz resonated with Union veterans; likewise, the prisons at Rock Island and Elmira and officials such as William Hoffman elicited anger from Confederate veterans. 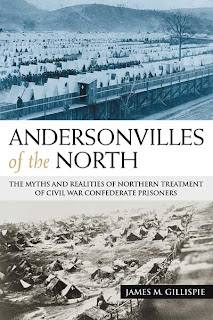 Given that atmosphere, the literature on Civil War prisons – memoirs, popular histories, and even scholarly work – has sometimes been high on polemics and light on analysis. Entering that fray – with more analysis and less rhetoric - is Dr. James M. Gillispie and his recent book, Andersonvilles of the North: The Myths and Realities of Northern Treatment of Civil War Confederate Prisoners (Denton: University of North Texas Press, 2008).

In Andersonvilles of the North, Dr. Gillispie provides a summary of the Northern version of their POW experience, the Southern version (especially as part of the Lost Cause Tradition), modern historiography on Civil War prisons, and an examination of the exchange system. In the main, Dr. Gillispie analyzes the conditions at nine major Union POW camps in detail to compile compare disease and mortality rates to similar rates in the Confederacy. A final chapter gives an overview of the state of knowledge about the causes of diseases in the Civil War era. Dr. Gillispie was kind enough to answer my questions about his interest in the Civil War and his research and conclusions about prison conditions.

Dr. Gillispie earned a Ph.D. in American History from the University of Mississippi - under the tutelage of Charles Reagan Wilson - and has taught history at Sampson Community College in Clinton, North Carolina, since 1999. He is the author of numerous articles and reviews on Civil War prison scholarship. He is also on the Board of the Averasboro Museum and is currently working on other projects, including a biography of Col. Thomas Purdie of the 18th North Carolina, which will also tell the story of Eastern Carolinians during the war. He is also co-editing a series of essays examining major Lost Cause myths and how some of the major ones have exerted a powerful influence on popular understanding of the Civil War.

Dr. Gillespie traces his interest in the Civil War back to his youth. “Having grown up in Virginia, it just seemed to me the Civil War was always around me,” he said, adding, “I suppose you could say the bug bit me early and never let go.” As a child, the Lost Cause image of plumed cavaliers and hard-hitting generals with names like “Stonewall” grabbed him and he imagined his 19th century ancestors as knight. In college, he became a History major with the idea of studying the Civil War more objectively to find out what it had really all been about and what it all meant, and realized it was as much a cultural event as it was a political or military one.

“My interest in Civil War prisons was sparked by pure necessity to be perfectly honest,” Dr. Gilliespie told me. “I was looking for a thesis topic and had to come up with something original to work on. It was then that I discovered that this area had been virtually ignored. Fortunately for me it was a topic that I really enjoyed researching,” he added. That research paid off – in my opinion – in an absorbing study that fulfilled his mission: using an evidence-based approach to dispassionately put to rest the myth that there was systematic starvation and poor medical care at Northern prisons as a matter of policy, without “whitewashing” what were certainly uncomfortable (and sometimes inexcusably deplorable) conditions.

Of special interest to readers of this column is that Dr. Gillispie approaches the topic primarily from a medical perspective. Indeed, he made extensive use of the Medical and Surgical History of the War of the Rebellion to compile disease and mortality statistics among the prisons and compare them to similar rates at the Confederacy’s premier Chimborazo hospital in Richmond. He also consulted dozens of archival sources containing wartime prisoner accounts as well as the best in secondary literature on Civil War prisons, including one of my favorites: Rebels at Rock Island (2000), written by my good friend and mentor, the late Benton McAdams.

Among Dr. Gilliespie’s most interesting – and important - resources are camp inspection reports by Union officials found in the Official Records (especially “Series II,” which contains correspondence, orders, reports, and returns relating to prisoners of war). It is especially in these reports that the myth of a systematic policy of starvation rations, inadequate shelter, and lackluster medical conditions is dispelled. Dr. Augustus M. Clark - Union Commissary-General William Hoffman’s prison inspector – made detailed reports on conditions at the various Union prisons throughout the war and had no qualms about recommending immediate changes to diet, sanitation, housing, or hospital conditions.

While Henry Wirz met the gallows after a post-surrender investigation and trial (such as it was) of his treatment of Union prisoners at Andersonville, Confederate veterans and historians alike decried the lack of accountability of Union “villains,” such as the (purportedly) tightfisted Hoffman, or Elmira’s post surgeon, Dr. E. F. Sanger. While Hoffman escaped any official censure, Dr. Gillispie describes in great detail how incompetent commandants and surgeons were quickly removed or reassigned based on unacceptable conditions at prison camps under their watch.

Regarding the health of Confederate prisoners, Dr. Gillispie makes the important point that they often arrived in Union prisons ill, wounded, exhausted, and/or malnourished, such that one Union surgeon declared that the inability of the South to adequately feed its soldiers “was the prime source of disease” among prisoners under Union watch. He also points to research in the modern field of “psychoneuroimmunology” which demonstrates that physical and psychological stress can also compromise health. Dr. Gillispie (and other modern writers) suggests that prolonged exposure to the elements, marches, and battles compromised the ability of soldiers on both sides to combat infection.

Although it is not a focus of his study, Dr. Gillispie reminds readers that Union prison camps could also be dangerous places for the guards. “Individual camp records on disease and mortality statistics make distinctions between guards and prisoners,” he told me. While guards probably enjoyed better health because of less-crowded quarters and less direct contact with contaminated prisoners, they “also ran a risk of getting ill and dying from things like pneumonia and smallpox just as the prisoners did,” Dr. Gillispie told me, adding, “the most dangerous place you could find yourself during the 1860s was a stationary military camp of any variety.”

I had some minor complaints after reading the book, including Dr. Gillispie’s use of some persistent myths, including the misleading statement that “Harvard’s medical school did not own a single stethescope,” which has since – like other such myths - been dispelled in modern studies, including Dr. Alfred Jay Bollet’s Civil War Medicine: Challenges and Triumphs (which Dr. Gilliespie did not appear to consult). These minor complaints do not detract from my high opinion of the book, and - to his credit - Dr. Gillispie does attribute disease and death in Civil War camps, hospitals, and prisons more to “tragic inevitability” (due to the state of knowledge at that time) rather than to incompetence on the parts of surgeons on both sides.

Finally, Dr. Gillespie acknowledges that his study is not the last word on Northern prison conditions; it intends to show that there is compelling evidence refuting the notion that Union prisons were purposely designed as death traps and that Northern prison officials were actually more humane than they’ve been given credit. “There were, no doubt, things I missed or overlooked,” Dr. Gillispie told me, adding that he hopes “others will take the book as something of a jumping off point to more completely examine places like Elmira, Camp Chase, and Johnson’s Island,” so that we have a much fuller view of what life was like in Union prisons during the war.
Posted by Jim Schmidt at 6:23 PM