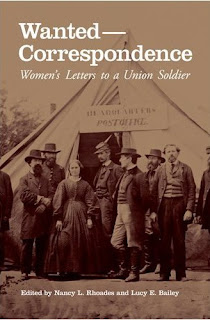 I'm in the middle of a really interesting book, entitled Wanted-Correspondence: Women's Letters to a Union Soldier. The book is a collection of 150 letters written to soldier Edwin Lybarger (43rd Ohio Volunteer Infantry) from several different women who answered his "Wanted: Correspondence" personal advertisements placed in various newspapers.

I received the book as a kind gift from author Jennifer Wilke, who is Lybarger's great-grandaughter! Jennifer is working on a novel based on her ancestor's Civil War experiences, and you can learn more about it at her website and blog, where you can also learn more about - and see photographs of - Edwin Lybarger.

The book includes a well-written and interesting Introduction by Lucy E. Bailey, an assistant professor in the Women's Studies program at Oklahoma State University. She describes letter writing as important "war work" on the part of women during the war, and covers topics such as: the importance of letter-writing in the war, correspondence as "romantic work," the importance of exchanging photographs between men and women during the war, women and education in the mid-19th century, letter writing as education in itself, and Ohio during the Civil War.

The heartfelt letters to Edwin are mostly from women he knew (and one he would eventually marry), but Dr. Bailey discusses somewhat the risks that the female letter-writers took in sending correspondence, especially since they might be shared among other soldiers and gossip and rumor ensue. However, in my own research while reading the book, I think those risks were expressed very strongly by a Wisconsin officer who placed his own notice in the paper, warning women NOT to answer the ads: 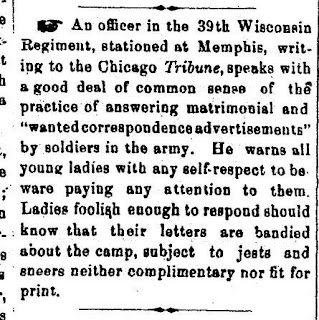 Janesville (WI) Weekly Gazette - September 9, 1864, p. 17
Ladies, permit me to address a few lines to you through the Tribune, in regard to "correspondence" with soldiers and officers serving in the army of our country. We, the officers and soldiers of the army, need and deserve the sympathy and counsel of our mothers, wives, sisters, and lady acquaintances from the dear homes which we have left behind. From these, letters are always acceptable, and are read with a deep interest; and there is always a deep feeling of respect for the writers, and the dear old homes from whence they come. There is no levity or expression of vulgar thought, or lewd illusions to the writers of them - holy home thoughts of the dear ones whome we loved so well; and often have I seen the bronzed face of the veteran, as well as the fair cheek of the young recruit, flushed with manly pride, or over them flowing tears that spoke louder than words of true hearts and brave men. Not so when your cold, insipid, and stale letters are received. There is generally a shout of derision from many voices as your carfeully written nonsense is retailed out to a corporal, sergeant, private or maybe a negro servant; and could you hear their vulgar wit and coarse expressions over your letters, and at your expense, I think ladies, you would answer no more 'Wanted Correspondence, for mutual cultivation.' I trust, ladies, that this article may be of service to you, inasmuch as it will urge you to write only to those whom you know; and you may put it down for a fact that any officer or soldier advertising for lady correspondence, does so for no honorable or noble purpose. Ninety-nine of every hundred letters by officers and soldiers are treated with contempt and derision. Thus you see that your tender effusions, gushing out flowery and sentimental platitudes, are used to your disadvantage and injury.

In many cases the officer or soldier takes pains to ascertain your true name, and then your letters not only reflect to your disadvantage, but bring disgrace to your friends. I know of one young lady who is the laughing stock of a whole regiment, andmany of them are or were friends and neighbors of hers, not two years ago. Her fair name and character are blighted, and one who as counted on her being something more than a friend to him in the future has cast her aside, and her letters of truth to him are unanswered, or returned unopened. Ladies, goodbye. Learn from this to do better. Write to your known and tried soldier friends and relatives, and none other. 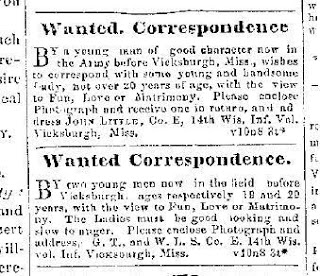 Jim:
Thanks very much for your interest and review of the Lybarger letters book. Your addition of warnings against soldier correspondence was great, and a valuable addition to the topic.

The acceptance of this collection for publication by David Sanders at Swallow Press was my late Aunt Nancy Lybarger Rhoades' wonderful 90th birthday present! She was co-editor, and transcribed all the letters originally.

My great-grandfather Edwin advertised for correspondents using the name Frank Wharton, and Lou Riggen answered under the name Fannie Jerome. They were interested enough by the first few letters to continue writing and confess their true identities. Lou's letter of Sept. 29, 1864 is one of my favorites, when she expresses herself frankly and humorously about "women's work."
I also have the impression that Edwin did not continue corresponding with several young ladies as soon as they revealed that their looks were plain and their interests modest. Although they mention visiting after the war, Edwin and Lou never met. He seems to have told her he was married to Sophronia Rogers only after he'd taken the hazard.

Thanks again, Jim. A great blog.

Thanks for the wonderful post on the letter writing war effort of ladies during this time.

We have enjoyed hearing the story of Edwin in our writers critique group and Jennifer's Aunt Nancy's dream to have the letters published. What treasures there are in families and the foresight to take care of them over the centuries.