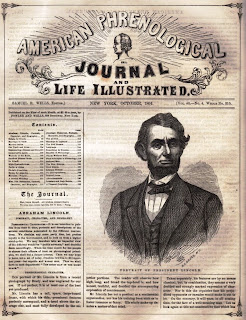 I'm pleased to continue my series on the origins and popularity of phrenology in the 19th century, especially during the Civil War. For a refresher, see Part I (Origins) and Part II (Americanizing Phrenology).

This post also introduces a new feature of the blog, in which I'll include engravings and extended excerpts of text from the phrenological profiles of leading wartime figures, as published in the American Phrenological Journal, a very popular feature of the day, and mnay of which I have in my own collection.

We begin with the central figure, Abraham Lincoln! This profile actually appeared in the October 1864 issue (it was a monthly), just before that year's elections. Indeed, the editors began with the following disclaimer:

"PRESIDENTIAL CANDIDATES - It is our intention to publish from time to time, portraits and descriptions of the several candidates nominated by the different conventions. We disclaim any mere party bias, but profess loyalty to the Government, and to look on from a higher stand-point. We may therefore take an impartial view of the different would-be "public servants," and describe them accordingly. When the times comes for the people to choose their officers of trust on phrenological principles, we shall feel a deeper interest. Then we may hope to have, not a set of noisy, drunken rowdies to fill important posts - but capable and honest men. Then we shall have in each department "THE RIGHT MAN IN THE RIGHT PLACE."

Lincolns' profile then begins with his physiognomy:

"Our portrait of Mr. Lincoln is from a recent photograph of Brady, and was engraved for our use. If not perfect, it is at least one of the best yet produced. Mr. Lincoln has a tall, spare, large-boned frame, with which his thin, prominent features perfectly correspond, and a head above the average size, and most fully developed in the superior portions. The reader will observe how high, long, and broad the top-head is, and how honest, truthful, and decided the accompanying expression of countenance. Mr. Lincoln has not a poetical or a sentimental organization, nor has been training been such as to foster romance or fancy. His whole make-up denotes a matter-of-fact mind. Taken separately, his features are by no means classical, but, in combination, they assume a very decided and strongly marked expression of character. Nor is this the repulsive face his enemies would make it out to be. On the contrary, it will pass, in all coming time, for the face of a well-meaning man. Let us look again at this not unattractive face which has been so much uncaricatured and so often held up in the South as that of a monster to frighten foolish people."

They then continue with some specifics of his phrenology:

"...and a forehead ample, but not ponderous, the perceptive faculties - Individuality, Form, Size, Order, Eventuality, and Locality - being among the largest; hence he is very practical, and abounding in facts. There is more mechanism than music indicated; more prose than poetry...there is, in Mr. Lincoln's face, when listening to pleasant and animated discourse, a most interesting and winning smile, the whole countenance being lighted up with a sunny and benignant glow."

What of that head?

"The size of the head is in fair proportion to that of the body...It is not the head of a fighter, and he can take no pleasure in combat or contention. Were there more of the lion in him he would be less patient and more executive...Mr. Lincoln has been called a gorilla, a Nero, etc., when the truth is he is far more like a lamb or a Howard, both in feeling and in character. He is called "slow." He is certainly not fast, but he proceeds cautiously, leaving it for circumstances or for Providence to indicate the when and the way to act."

What of his religion?

"He has large Benevolence, large Concientiousness, and large Hope. His Veneration is full, and his Spirituality average. His religion consists more in kindness an justice than in faith, humility or devotion. To do right and to do good are his leading moral characteristics. Socially he is strong in his attachments, constant in his affections, and wel adapted to wedded life. Intellectually, there is nothing wanting. His Causality is full, Comparison is large, and nearly all the perceptives large and active."

"In conclusion: he is open to conviction, true to his higher nature, and goverened by moral principle rather than by policy. He is firm, persevering, generous, kind-hearted, affectionate, intelligent with a high degree of strong, practical common sense. If not great, is he not good? If not the best man for the situation, where can you find a better?"

This "reading" seems to be a pretty good description of Lincoln. I'll take it to be a coincidence. ;) (of course it was done in 1864!)
Fun reading material !

Fascinating. I'm a Very mature student (just finished my 2nd year of BA hons English & History). My dissertation next year will focus on phrenology in 19th century England. Thank you for adding to that knowledge.

Ruth - Thanks for the kind comment and good luck in your studies! I will continue to post Civil War-era phrenological profiles so stay posted! Jim