The newest installment of my "Medical Department" column in The Civil War News describes religious tracts intended for sick and wounded soldiers...it has tons of hyperlinks to period texts. Enjoy!

A BALM FROM GILEAD
By James M. Schmidt
The Civil War News – “Medical Department” – January 2010
“Said a poor desolate boy – who had no friends, and no home to go to, and consequently no desire to leave the hospital, which to the rest was so dreary – ‘Oh! But that was a comforting book you gave me!’ ‘What was it?’ was my inquiry. ‘Words of Healing,’ he replied.’” – Letter, nurse Jane Boswell, Presbyterian Banner, December 2, 1863
During the Civil War, the United States Christian Commission stated that its primary objective was “furnishing them [Union soldiers] religious tracts, periodicals, and books.” One of the primary publishers of such texts was the aptly named “American Tract Society.” Founded in 1825, the society was very prolific during the war: by 1862, the New England branch alone could justly boast of 175 titles published and more than a million individual tracts distributed. Other organizations - including the American Bible Society, the Presbyterian Board of Publication, Protestant Episcopal Book Society, Catholic tract societies - and private individuals also published religious literature for the soldiers. 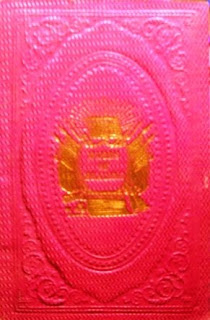 Some of the titles were devotional, such as The Soldier’s Pocket Book and The Hymn-Book for the Army and Navy; others were meant to inspire by pointing to the piety of national heroes such as George Washington or as in A Soldier of the Cumberland, written by the father of a fallen Wisconsin soldier; others warned against vice, such as The Temperance Letter or Satan’s Baits. Of particular interest to readers of this column are tracts that were published to provide comfort to soldiers in the hospitals. Among these special tracts was Words of Healing for the Sick Soldier (American Tract Society, 1862). I have an original in my collection and am happy to provide some excerpts below.

The booklet is small – about 4x6 inches – but has an attractive tooled magenta cover with an image embossed in gold leaf on the front: the title, “Words of Healing,” surrounded by the Bible, the Constitution, flags, rifles, cannon, and shot. The text of thirty-two pages was written by “Mrs. H. E. Brown.” I do not know much about her, except that she wrote several tracts before, during, and after the war, including John Freeman and his Family (1864), which was intended for newly-emancipated slaves.

The booklet begins with an introduction entitled “Kind Words,” in which Mrs. Brown states:

“Dear, sick, suffering soldier, tossing with pain upon your comfortless pallet in the hospital, let me bring to you a few words of sympathy and love. Gladly would I come to your bedside if I could and minister to your wants…But I am not permitted to do this. All I can do is stand at a distance and lift up to heaven, in your behalf, the supplicating hand, and send to you the assurance of my kindest regard. You are not, and shall not, be forgotten.” 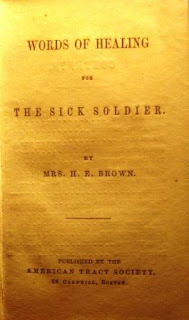 In the main, the tract consists of about a dozen short sections of consolation and devotion, each beginning with the words or question of an imagined suffering soldier, followed by hymns or fitting passages from scripture provided by an “Unseen Friend.” As examples, the sections include: “Heavenly Pity” (“I am racked and tortured with pain”); “Surpassing Tenderness” (“Oh, for my mother, my dear mother! If her hand could only be laid upon my head!”); “Comfort for the Weak and Weary” (“How wearisome is this long confinement in this cheerless, miserable place!”); “Glimpse of Heaven” (“Heaven seems distant and dark. Whither, ah whither, am I going?”).

Typical of the entries is that for “The Burden Lifted” in which the imagined sufferer worries for his family and exclaims, “How can I leave my wife and children?” The “Unseen Friend” replies with Old Testament passages meant to comfort, such as “Leave thy fatherless children; I will preserve them alive; and let thy widows trust in me,” (Jer. 49:11) and “Thou art the helper of the fatherless,” (Ps. 10:14), and verses from a popular poem of the era, “The Voice Calling”:

Ah, Thou still art calling, calling,
With a soft voice unappalling;
And it vibrates in far circles through the everlasting years;
When Thon knockest, even so!
I will arise and go
Of Mrs. Brown’s tract, one wartime nurse – Elizabeth Comstock – wrote:

“As I entered one of the wards the nurse approached me with a very warm greeting, saying how glad she was to see me…She took me to a small room where lay a poor young soldier whom she thought very near death...I replaced the bandage tenderly and carefully...The blue eyes opened and he cast an earnest, appealing look at me, and seeing he was conscious I spoke a few words to him about mother and home, Jesus and heaven. Large tears gathered in his eyes and rolled down his cheeks as he made an effort to speak...I had a little book with me, Words of Healing for the Sick Soldier, from which I read him a few sentences. He seemed to understand, and looked longingly at the book, which I handed to him…”
Tracts meant to comfort soldiers in the hospitals were by no means unique to the North. The University of North Carolina’s excellent “Documenting the South” online collection includes the full text of a number of similar publications, including A Word of Comfort for the Sick Soldier, A Word of Warning for the Sick Soldier, The Wounded Soldier, and In the Hospital - by the Rev. George B. Taylor - in which he beseeches the soldier to not “yield to a feeling of discontent, because you are laid aside from active duty,” adding:

“Yours is now the more difficult, and the no less useful part. Every right thinking person regards the sick or wounded soldier, who patiently and cheerfully suffers his appointed time, as no less heroic than when marching or fighting; and doubtless, the historian of this war will refer to our hospitals as being not less glorious to our people than our bloody and victorious battle fields.”
Historians have questioned the actual impact of the tracts on the Yankee and Rebel soldiery. In Soldiers Blue and Gray, James Robertson stated that officers resented the tracts because the ubiquitous references to death and final judgment “unnerved the fighting man and made him unreliable in battle.” Likewise, in the classic The Life of Billy Yank, Bell Wiley declared that “soldier letters and diaries do not sustain the conclusion” that tracts were warmly received, widely read, or “productive of distinct improvement in religion and morals.”

Still, of the special case of the sick and wounded, Union army chaplain James B. Rogers, in his mid-war memoir, War Pictures, declared, “The men in the hospitals showed special eagerness to obtain religious books and tracts.” Rogers wrote that he “aimed always to have a supply” to help the soldiers “while away the slow hours of the day in camp, or the more tedious period of convalescence in the hospitals.”

Helen Brown closed her booklet with some “Parting Words”:

“Farewell, dear friend. If the brief messages I have brought you have been pleasant and comfortable, if they have proved a healing or refreshing draught, I am sincerely thankful.”
Perhaps the ailing soldiers silently thanked her in return.
Posted by Jim Schmidt at 8:57 AM