Civil War Pension Fraud is No Laughing Matter...OH YES IT IS!

I have written posts and columns before on the Civil War pension system, and more posts, images, and columns are coming this year.

At one time or another, all five pillars (but especially the pensioners, attorneys, and doctors) were subject to significant scrutiny and criticism for extensive fraud. Some of this was quite serious, but it also led to a significant amount of ridicule and humor in the late 19th century, a few example of which are below:

1) My favorite! A joke involving Bull Run, first published in Puck in 1887 and then widely copied in papers and magazines:

"It is common report that sailors do sometimes fall off their ships and hurt themselves. Rarely does a seaman, that is, an ordinary seaman, say an untruth. I have met but one instance in my pension experience. This old salt swore he fell overboard while serving on the U. S. S. Arethusa and scraped his legs on the barnacles on the vessel's bottom. The result " was chronic ulcers which disable him to this day," for which he humbly asked a pension. The examining board reported that "his general appearance was good; all internal organs healthy, but that scars on the penis, in the groin, along the line of the tibiae, roughness of the long bones, enlargement of post-cervical glands, etc., show that ' Arethusa' was not the name of the ' bottom' that scraped him."
3) And a cartoon, also from Puck, which was particularly harsh in editorializing against pension fraud: 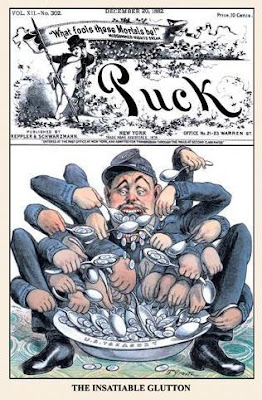 An old shirker from the 13th Mass was eating more than his fair share of the fare at an old soldier's home. In desperation the authorities examined his military records in hopes of finding a way to expel him. They were successful. His enlistment was credited to another town to which he was immediately exported.

Soon the authorities in this town were at wits end over the voracious appetite of their new veteran tenant. But not wishing to be cruel to a veteran, a committee of town representatives sought out some of the soldier's old comrades from the 13th Mass, to see if a pension could not be got for him.

An interview ensued. The candidate was asked by his comrades if he could not remember a time in all his service when he might have injured himself. Since the skulker spent the majority of his time with the wagon train, he had to think hard.

"Once he said, when the wagons came to a sudden stop, I hurt my side."

His comrades were shocked at the hard service he had seen during his 3 year enlistment; - He had hurt his side once when the wagon stopped short !

They told him, "The gov't. doesn't owe you a pension, you owe the gov't. a pension." Then they sent him away.

The authorities at the 'soldier's home' chastised the veterans of the 13th for being so cruel to their former 'comrade in arms.' And, they kept paying the food bills.

Brad - Thanks for the GREAT story...you see: this is why I LOVE doing this blog! Jim