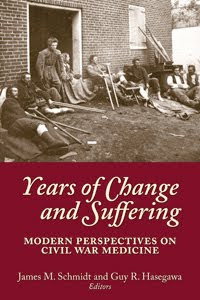 Dr. Hasegawa is a Senior Editor of the American Journal of Health-System Pharmacy, a published expert on Confederate pharmacy and other aspects of Civil War medicine, and a board member of the National Museum of Civil War Medicine and the Society of Civil War Surgeons. Guy should be no stranger to readers of this blog or my "Medical Department" column in The Civil War News, as he has been an interview subject several times, regarding his work on Civil War pharmacy, quinine substitutes in the Confederacy, and other interesting topics.

In his chapter, he describes "how the Confederate army marshaled a wide array of resources, natural and otherwise, to furnish its physicians with the medicines needed to treat the vast numbers of sick and wounded soldiers." He has an amazing penchant for finding and drawing on previously unpublished primary source material, and he carries that talent in to this chapter.

Historians recognize that one of the Confederate Army’s most noteworthy accomplishments in dealing with the Union blockade was providing its troops with sufficient arms and ammunition to carry on a long and hard-fought war. Less well known is the story, summarized here, of how the same army marshaled a wide array of resources, natural and otherwise, to furnish its physicians with the medicines needed to treat the vast numbers of sick and wounded soldiers.(1)

The Confederate medical department’s wish list for drugs was its standard supply table for hospitals, which duplicated almost exactly its Union counterpart and included an array of medicines, from acacia to zinc sulfate. Unfortunately, the conditions in the North that allowed for an uninterrupted supply of the items — a continued influx of goods from abroad and the capacity for large-scale drug manufacturing — were not as easy for the South to replicate. Some medicines in the table, like fluid extract of wild cherry bark, were made from plants growing in North America, but many others, like quinine, originated in foreign lands. Moreover, drugs like mercurial compounds, chloroform, and ether, which were made from minerals or chemicals, were not being produced in large amounts in the nonindustrial South. Before the war, these circumstances dictated that the South obtain its drugs from overseas or from Northern dealers or manufacturers. The onset of hostilities and the reduction of trade with the North forced Confederate Army supply officers, called medical purveyors, to rely initially on purchases from blockade runners and local druggists and medical wholesalers. (It is ironic that the war also threatened to cut off the supply of Southern plants needed by Northern physicians.) Although foreign goods arrived in Southern ports fairly frequently early in the war, a tightening blockade, a prolonged conflict, and rising drug prices — driven by scarcity, inflation, and speculators — would spell trouble for an army that needed massive quantities of medicines.(2)

These prospects, soon to become realities, led Army Surgeon General Samuel Preston Moore to conclude before the war was a year old that the South itself should be tapped as a well of supplies for his surgeons. Thus, orders for manufactured items — cots, tourniquets, and surgical instruments, for instance — were placed with local businesses and artisans, and natural resources, especially plants, were turned into medicines. The objects behind the “appropriation of our indigenous medicinal substances of the vegetable kingdom,” announced Moore, were to take greater advantage of the South’s resources and reduce its payment for foreign goods. (In this context, “indigenous” plants included species native to the Confederate states as well as those introduced into the South from other lands.) In practical terms, Moore hoped that Southern drug production would supplement other sources of supply such that the army would have sufficient medicines for its needs.(3)

The Decision to Use Southern Plants

An important undercurrent to the Confederate medical department’s situation was the friction between allopathic (“regular” or orthodox) physicians and other practitioners. Most Confederate surgeons, including Surgeon General Moore, were allopaths. A number of medical sects disapproved of the harsh drugs and other “heroic” treatments, such as bloodletting, used by some allopaths and instead advocated relatively mild remedies, often derived from North American flora. Allopaths already knew about and prescribed some of those plants, but they often regarded botanical and other sectarian practitioners as quacks and rejected their teachings as irrational.(4)

After the war, Moore explained his decision to turn to indigenous flora: “It had been my impression for a long time that many of the Southern medicinal plants possessed valuable properties, and that their usefulness would soon be discovered in many diseases if administered with care and attention.” Moore may have dismissed the views of botanical practitioners, but his lack of certainty about the plants’ value also seems, at first glance, to indicate a distrust of the established allopathic knowledge base. Among the species eventually used by the Confederate army, the vast majority were already in The Pharmacopoeia of the United States of America (USP), the standard listing of allopathic drugs. Many were described in the prewar curricula of Southern allopathic medical schools, such as the Atlanta Medical College and the Medical College of the State of South Carolina. Large numbers of future Confederate surgeons attended Northern medical schools like the University of Pennsylvania, whose materia medica course covered dozens of medicinal plants growing in the South. Some allopathic physicians studied and published articles about native plants.(5)

Credible information, however, did not necessarily give physicians confidence in remedies they did not personally prescribe. Moore had served in the United States Army as a surgeon for twenty-six years and may have had little opportunity to use remedies that were not on the Army’s standard list. Even practitioners familiar with Southern plants in civilian practice had little idea of the medicines’ value in treating the maladies of a large army. Whereas the allopathic literature described the medicinal properties of native plants, it did not generally claim that they surpassed or even matched standard drugs in value. Thus, it is understandable that Moore’s views about the usefulness of indigenous plants formed not a conviction but rather an impression, albeit one that clearly required action.(6)

The first known step of the surgeon general’s office in promoting the use of native flora was its publication on March, 21, 1862, of a pamphlet of indigenous medicinal plants, which was distributed to medical officers on April 2. There was good reason at the time to fear that the flow of goods from abroad was in jeopardy. Just a few months earlier, in November 1861, a Union victory at Port Royal Sound, South Carolina, had provided the U.S. Navy with a splendid base for blockading operations. During the same month, Union forces had occupied Tybee Island, Georgia, a move that threatened Fort Pulaski, which guarded the sea approach to Savannah. The pamphlet listed sixty-seven of the South’s “more important medicinal plants” and described where they grew and their uses, formulations, and dosage. Moore maintained control over the selection of plants and instructed his surgeons to collect the listed species and send them to medical purveyors. He also directed medical officers to investigate the value of indigenous remedies in relieving pain or inducing vomiting or defecation, because of the relatively small number of Southern plants recognized as useful for those purposes.(7)

In a circular issued on July 22, 1862, Moore reminded surgeons of the uses of several indigenous medicinal plants and encouraged them to report on the antimalarial effectiveness of Pinckneya pubens (Georgia bark), which had not been mentioned in the recent pamphlet. By the summer of 1862, medical purveyors were already issuing substitutes in place of scarce standard items, and this sometimes displeased the recipients. “The Surgeons around here,” wrote a medical purveyor to his assistant, “expect what they order whether it is in the Confederacy or not. They cannot appreciate kindness in substituting one medicine for another rather than let them go without.”(8)

(4) Alex Berman, “A Striving for Scientific Respectability: Some American Botanics and the Nineteenth-Century Plant Materia Medica,” Bulletin of the History of Medicine 30 (January-February 1956): 7-31; Dan King, Quackery Unmasked: Or a Consideration of the Most Prominent Empirical Schemes of the Present Time, with an Enumeration of Some of the Causes Which Contribute to Their Support (Boston: David Clapp, 1858).

(5) Samuel Preston Moore, “Address of the President of the Association of Medical Officers of the Confederate States Army and Navy,” Southern Practitioner 31 (October 1909): 491-98. The purpose of the USP was to standardize the nomenclature and preparations of “substances which possess medicinal power...the utility of which is most fully established and best understood.” The USP’s primary list included “articles which might be considered of standard character,” whereas its secondary list included “substances as were deemed of secondary or doubtful efficacy” and articles, particularly new ones, for which further investigation was warranted. The Pharmacopoeia of the United States of America (Boston: Wells and Lilly, 1820). The USP classification scheme continued in subsequent editions, and its listings at the onset of the Civil War were included in George B. Wood and Franklin Bache, The Dispensatory of the United States of America (Philadelphia: J. B. Lippincott, 1858). Joseph Carson, Synopsis of the Course of Lectures in Materia Medica and Pharmacy, Delivered on the University of Pennsylvania (Philadelphia: Blanchard and Lea, 1855); John G. Westmoreland, A Syllabus of Lectures on Materia Medica and Therapeutics, Delivered in the Atlanta Medical College (Atlanta: G. P. Eddy, 1857); Henry R. Frost, Outlines of a Course of Lectures on the Materia Medica, Designed for the Use of Students, Delivered at the Medical College of the State of South Carolina, 5th ed. (Charleston: James and Williams, 1858).