Excerpt #4 from "Years of Change and Suffering"! - Chapter 2 - "A Multiplicity of Ingenious Articles"

Continuing with excerpts from Years of Change and Suffering: Modern Perspectives on Civil War Medicine (Edinborough Press, 2009), I am pleased to offer the following from my chapter, "A Multiplicity of Ingenious Articles."
Having written about the general history of Scientific American magazine in the Civil War as a chapter in my first book, Lincoln's Labels: America's Best Known Brands and the Civil War (Edinborough Press, 2008), in this chapter for Years of Change I concentrate specifically on the subject of Civil War medicine as revealed in the wartime pages of Scientific American. Just as it did for weapons, Scientific American played an equally important role in fostering the "healing arts" by advising soldiers and their leaders how to maintain the health of the army, urging inventors to give attention to unmet medical needs, and reporting on advances in medical technology. I also address recent historical scholarship in the economics and social impact of invention in the mid-1800s.
Enjoy the excerpt!
STAY TUNED FOR A BOOK GIVEAWAY CONTEST LATER THIS WEEK!!
Years of Change and Suffering
Modern Perspectives on Civil War Medicine
Chapter 2 - "A Multiplicity of Ingenious Articles" (Excerpt)
by James M. Schmidt
(Copyright 2009, the author) 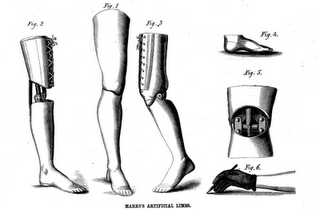 hi, i am trying to track down that unpublished dissertation by michael borut you mention on your blog, about nineteenth century scientific american. do you happen to know where to find it? thanks so much. you can email me at dmost68@gmail.com