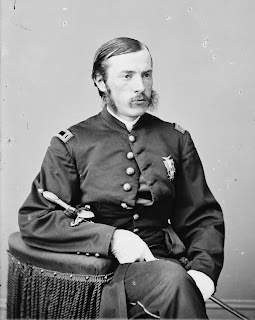 Readers of this blog or my "Medical Department" column in The Civil War News should be no stranger to Guy R. Hasegawa, Pharm.D., as his work has been the subject of several columns and posts over the years, including Civil War pharmacy and quinine substitutes in the Confederacy , his contributions as co-editor and author of Years of Change and Suffering, or his presentations at history conferences.
This is all with good reason: first - he is a dear friend; second - his scholarship is always marked by an interesting subject, impeccable primary research, and an engaging writing style.
Below, find a (really) old "Medical Department" column (October 2001) based on Guy's research and start to look forward to the November 2010 column which is also an interview with Guy about the medical implications of chemical weapons in the Civil War. I"ll post that one on the blog in late October after it appears in print.
Enjoy!

Thus though life be hard and weary
Philosophic Med. Cads. we:
Thick may crowd the dead and dying
Still we’ll gay and happy be
Posted by Jim Schmidt at 10:08 AM