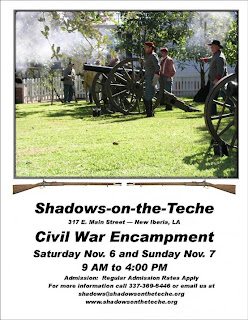 Shadows-on-the-Teche is an historic house and garden owned and operated by the National Trust for Historic Preservation. It was built in 1831-1834 for sugarcane planter David Weeks and his wife Mary C. Weeks. A National Historic Landmark, the house is located in New Iberia, Louisiana.
You can learn more about the history of the home at the Shadows' wonderful history website.
Here is information about the great Civil War living history weekend they have planned for Nov 6-7, 2010...I'll be there to talk about Civil War medicine!
FOR IMMEDIATE RELEASE
FOR MORE INFORMATION: CONTACT CATHERINE SCHRAMM AT 337.369-6446
WHO SHADOWS-ON-THE-TECHE
WHAT Shadows Civil War Encampment
WHEN Saturday, November 6 and Sunday, November 7, 2010
WHERE 317 E. MAIN STREET, NEW IBERIA, LA 70560
(BEGIN): During the weekend of November 6 and 7, 2010, visitors who enter the Shadows gardens can experience the thundering sounds of cannons and the scent of wood smoke lingering in the air as Civil War soldiers march toward battle along the oak lined Bayou Teche. Southwestern Louisiana witnessed a parade of Union troops marching west in 1863. Fewer Confederate troops battled to slow this inevitable advance. Scenarios performed by re-enactors during the weekend event reflect the military actions and civilian reactions to war in Louisiana. Portraying history through realistic scenarios, re-enactors will address both the impact of the War and its far-reaching effects during Reconstruction. Visitors can observe soldiers lives between battles as they played music and cards or attended to their equipment.

Also this year, Mr. James Schmidt, a chemist and an expert on Civil War medicine will acquaint visitors with issues related to this topic in two different presentations on Saturday. Demonstrations will include information about cavalry, flags, uniforms, weapons and other general topics about life during the war years. In addition to the living history, the Shadows guided tour will focus on specific information from letters written by the Weeks family in the Civil War years. A special tour focusing on Reconstruction is also scheduled at specific times during the weekend.

Visitors can select from a couple of options for their visit. Available that weekend are adult and children’s rates for admission to the entire site including a guided Civil War tour of the Shadows or grounds only admission for the living history program. Site hours are 9-5 on Saturday and Sunday with camps closing at 4 p.m. on Sunday. The last tour of the Shadows will begin at 4:15 each day. For additional information, call the Shadows at (337) 369-6446. :(END)
Now that's the first time I've ever been mentioned in a press release! Seriously, though, I am so excited and honored to be a part of this event! Catherine Schramm - Director of Education at The Shadows - has already shared some wonderful primary material with me regarding period medical care at the Shadows. Indeed - one could hardly ask for a more amazing nexus of civilian, African-American slave, and soldier medicine all in ONE place during the 1860s.
I will post photos and more when I return. I also found out I will be joining some reenactors in talking to some Cub Scouts and Boy Scouts on the Friday night before...As a former Scout, I'm just as excited about that as I am the Shadows weekend itself!
If you read this blog and you are at the weekend, please say "Hi"!
Posted by Jim Schmidt at 10:04 AM