As a reminder, here are links to previous pension ephemera posts:

And now on to the latest installment of Civil War pension items in my collection!

In September, 1862, the threatened invasion of Cincinnati by the rebels under Gen. Kirby Smith, brought out a call from the Governor of Ohio for the citizens of the State to come to the rescue. Thousands of men responded to the call. As these volunteers were equipped with all sorts of firearms, they became officially known as the '' Squirrel Hunters." The timely arrival of these patriots from every portion of the State, doubtless averted the invasion and saved Cincinnati. Before the thirty days for which they were called out had expired most of them had returned to their homes. Still, the "bloodless victory" secured by the ''Squirrel Hunters'' engendered credit for their prompt and patriotic response when danger threatened their State.

You can read more about the invasion of Cincinnati and the Squirrel Hunters in David E. Roth's great article for the Cincinnati Civil War Round Table here.

As the Squirrel Hunters were not officially enlisted in the Union army during the Civil War, they did not secure discharges or pensions from the federal government. However, the governor of Ohio did supply discharges (see the example below from the "Seeking Michigan" website of the Michigan State Archives) and in 1911, the Ohio legislature enacted a law providing for a single $13 payment to all Squirrel Hunters in appreciation of their service. 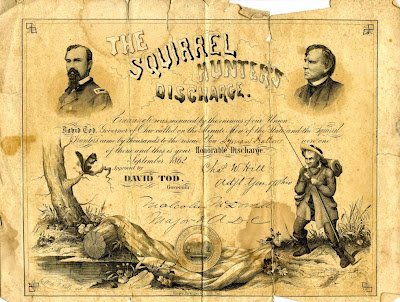 The images below are from a collection of papers in my collection to a pension agent acting on behalf of a "Mr. Ballard," a former Squirrel Hunter seeking his $13. The Ohio Commissioner of Patents replied with a cover letter, the necessary Squirrel Hunter pension paperwork (and a return envelope) as well as other United States pension forms. 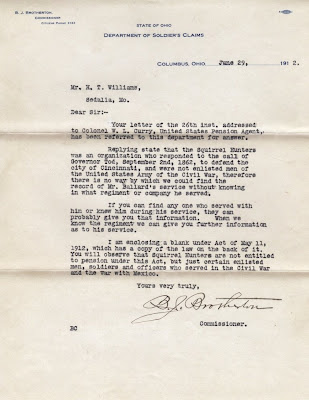 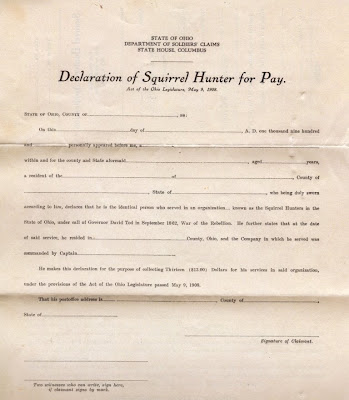 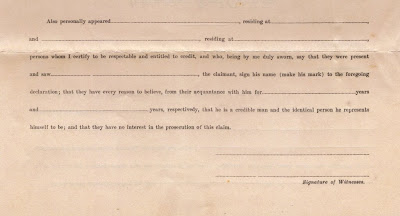 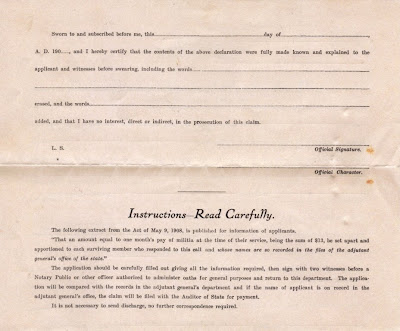 We have just discovered that my husband's ggg-grandfather and his son were listed in the roster of Squirrel Hunters in Gallia County, Ohio. Do you know of any way to get more information about their service, ie: pension? We have found little information about these 2 men, especially the dates of their deaths. We wonder if they may have been wounded or killed in battle?

First - Congratulations on what must be a fun and honorable find for you and your family! Apart from their "squirrel hunter" service, I'd first try to see if they later enlisted regularly in the Union army as you'd have more luck finding their records and they would be more informative. It's (very) doubtful they were killed in action - or even saw action - as members of the squirrel hunters. The Ohio Historical Society does have some information on squirrel hunter records and claims and you can learn how to contact them at:

If you'll send me their names by private e-mail (schmidtjamesm at gmail dot com) I'll see if I can find any leads on their service in the Union army as Ohio volunteers.