I wrote six short articles for North & South magazine from 2001-2008 and in doing so met and corresponded with two great people: Al Nofi, editor of the "Knapsack" section in which my articles appeared, and Terry Johnston, Assistant Editor of the magazine.

Al became a good friend and mentor and even wrote a very kind Foreword for my first book, Lincoln's Labels: America's Best Known Brands and the Civil War (Edinborough Press, 2008).

Likewise, Terry became a friend and faithful correspondent. About a year ago, Terry contacted me about an exciting new Civil War magazine project he was spearheading, solicited what (little) advice I might have, and kindly invited me to become a contributor to the magazine but especially to the digital component that would be part of the venture.

It's been a hard secret to keep and I was delighted that he gave me updates as his team got closer to launching the print magazine and the web content.

Well, it's a secret no longer! Here's a HEARTY WELCOME TO:

THE CIVIL WAR MONITOR
A New Look at the Nation's Greatest Conflict
The first issue of the magazine will be on newsstands within a week and the website (here) was launched today! 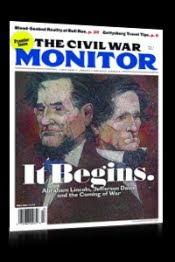 Terry was kind enough to send me an advance copy of the first issue and if the contents of the premier edition are any indication, this is going to be a GREAT publication!

The feature articles were well-written, interesting, and annotated and the artwork and maps are wonderful (the premier issue included previously unpublished period photographs as well as some that I had never seen before). Most important, the articles were not re-hashes of familiar topics based on secondary sources - they were serious (but readable articles!) - about important subjects that are generally ignored, at least in the Civil War popular press. Other shorter sections on Civil War travel, book reviews, and more will make it a magazine to appeal to a wide variety of audiences.

I am so pleased for and proud of Terry - Editor-in-Chief of the Monitor - and wish him and his team every success!

Terry is also very keen on establishing a presence in social media, so you will find links to follow the Monitor on Facebook, Twitter, and more.

As part of their online presence, the Monitor has a community blog they've named "The Front Line" (here).

I'm humbled (but also very happy!) that Terry has kindly invited me to join that community so I'll be posting there on subjects near and dear to me and (hopefully!) interesting to you!

The present stable of bloggers are all people that I admire greatly and also am proud to claim as friends: Craig Swain from To The Sound of the Guns, Andy Hall (my favorite blogger!) from Dead Confederates, Eric Wittenberg from Rantings of a Civil War Historian, Robert Moore from Cenantua's Blog, Harry Smeltzer from Bull Runnings, Kevin Levin from Civil War Memory, and Keith Harris from Cosmic America [oh, and me (!) here at Civil War Medicine (and Writing).]

Good luck to the MONITOR! You're off to a GREAT start!
Posted by Jim Schmidt at 11:16 AM

Jim, This looks like a winner. I'll be on the lookout for the first issue. If it turns out as good as you say I'll definitely be subscribing. Glad you're finding yet another outlet to showcase your writing. Hopefully it will help book sales. Congratulations!

Robert - Thanks! Terry Johnston is a terrific editor and has had a founder's passion for this project for more than a year now.

Keep up the GREAT book reviews! I'm so glad you are getting recognized and have books coming your way.

And if you take any more Civil War trips, PLEASE (please!) write some more of those travel pieces like you did for Gettysburg...they were super!