"I have a great many things to say which in these days is more prudent to withhold for the present or until God is pleased to arrange affairs where it will no longer be treason to speak or write our sentiments." — James P. Nash, Galveston, Letter written December 6, 1863

I had the great honor of having another short article published in the Galveston County Daily News this past weekend (Sunday, 30 June 2013), about the loss of civil liberties during wartime, especially in Galveston during the Civil War while in Confederate hands. (You can see my previous article in the GCDN - about the use of slaves to build fortifications on the island - here).

I can't link directly to the editorial due to a paywall, but you will see the clipping below, at the end of the post.

Texas was not the site of many large-scale battles or concerted military movements during the Civil War, certainly not as much as sister states like Virginia, Tennessee or Mississippi. But that is not to say the state was spared any violence. Indeed, even before the war—and through to its end and after—Texans were witness to significant episodes of vigilante justice, especially against Unionists and other dissenters, as Cicero’s maxim Inter arma enim silent leges (“In times of war the law falls silent”) held forth. Even within the justice system of the Confederacy, the government enforced conscription, imprisoned troublesome citizens and confiscated private property belonging to “alien enemies.”

Civil liberties are often challenged in wartime. For example, President Abraham Lincoln’s early suspension of the writ of habeas corpus was hotly debated in its day and has been since. Jefferson Davis, in his Rise and Fall of the Confederate Government, catalogued what he saw as the faults of the Lincoln administration, writing that they “presided over the ballotbox, held the keys of the prisons, arrested all citizens at its pleasure, suspended or suppressed newspapers, and did whatever it pleased under the declaration that the public welfare required it.” Likewise, platforms of political conventions in loyal states complained of the “establishment of a system of espionage by a secret police to invade the sacred privacy of unsuspecting citizens.” The riddle, though, is how Jefferson Davis managed to complain with little sense of irony: all of these actions also happened in Texas—and in Galveston—under the auspices of the Confederacy.(1)

The following notice appeared in the August 20, 1862, issue of the Galveston Weekly News:

“We learn that John De Young and ---- Bilderbac[k], of Galveston, and ---- Asher of [Harris] county, who have been under arrest for some time past on the charge of having uttered treasonable language towards our Government, have been tried and convicted, and sent to the State penitentiary for a residence till the end of the war.”(2)

The three men mentioned in the notice were only a few of the thousands of political prisoners held by both sides during the war. The cases of John De Young and Robert Bilderback provide an opportunity to examine the sentiments and actions of some of Galveston’s more vocal Unionists—so vocal that they attracted the attention of their fellow citizens who either turned them into authorities or testified against them. They also attracted the attention of detectives in Galveston’s police force and a “secret police” force constituted by the Confederate provost marshal.(3)


As early as November 1861, H.R. Percy—secretary of Galveston’s “Detective Police”—identified Asher, Bilderback and John Varney as suspicious persons in a memo to General Paul Hebert, then commanding Confederate forces in Texas. Percy declared that Varney was “a Yankee by birth…lives with a Negro woman…states that he will not take up arms to defend the South on the Island…Our organization considers him as extremely dangerous, of low character, cool, skillful, and plotting.” Bilderback and Asher were also fingered as being “disaffected and every way opposed to the South” or for stating openly “that the South cannot maintain itself ” and for touting “the strength and resources of the North.” In each case, Percy included the names of other Galveston citizens who were witnesses to the statements.(4) 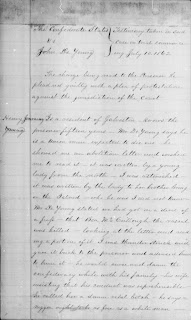 Apparently no action was taken against the men at the time, but in the spring and summer of 1862, Asher, Bilderback and De Young were tried by a Confederate military tribunal and sentenced to the state prison in Huntsville for the duration of the war. Bilderback was a shoemaker known in town as “Old Billy.” He lived in the same small rickety building in Galveston for thirty years and was considered a loner and eccentric: the local newspaper declared that he “in his characteristics was decidedly peculiar.” John De Young was a longtime Galvestonian and respected carpenter, surveyor, architect and “master builder” responsible for the construction of some of the island’s iconic edifices, including Trinity Church, the Ursuline Academy and the fine homes of some of its leading citizens.(5)

De Young was charged with “Using seditious language in regard to the Confederate government…Attempting to aid and comfort the enemy by raising the flag of the United States in view of the blockading squadron…[and] holding correspondence with and giving intelligence to the Public Enemy.” The correspondence included a letter written to President Abraham Lincoln, which De Young’s son apparently destroyed. Archival records include many pages of written testimony from fellow Galvestonians against De Young, including statements that he called his own wife a “damn rebel b-----” for leaving Galveston; that he declared “all the Confederate soldiers were…thieving rebels and ought to be hung”; and that he was warned that he was a “marked man” and should be “cautious” but continued to state that “he was a Union man and that the Southern Confederacy was nothing more than chaff.”(6)

Bilderback was charged with stating that “the Federals would certainly come here and whip us…that he would be the first man on Galveston Island to fly to their assistance…attempting to correspond with the public enemy by means of lights and flags…[and] that on two occasions he was found at or near Pelican Spit [with] lanterns, different colored lights and flags.” In dozens of pages of written testimony and cross-examination, fellow Galvestonians reported on Bilderback’s Union sentiments, his suspicious activities with lights and flags in the channel and his solitary and eccentric nature, with one man declaring he had always thought Bilderback a bit “cracked.”(7) 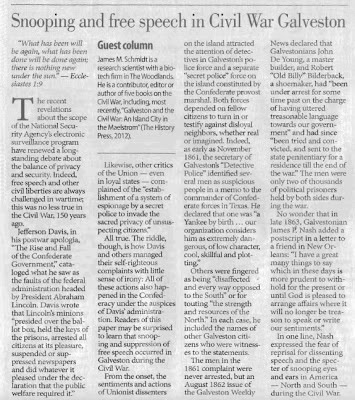 You can learn more about Galveston's Civil War history in Galveston and the Civil War: An Island City in the Maelstrom (The History Press, 2012).﻿ 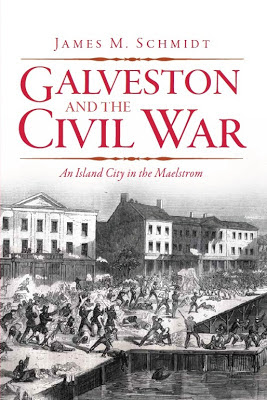 How apropos...especially since we wrestle with these same issues today:)

Mark - thanks so much for the comment...yes, the recent news and debates over how much privacy and/or liberty we should give up in times of war is actually a long-standing debate. Two books I highly recommend are Mark Neely's "Southern Rights: Political Prisoners and the Myth of Confederate Constitutionalism" and his companion "The Fate of Liberty: Abraham Lincoln and Civil Liberties"